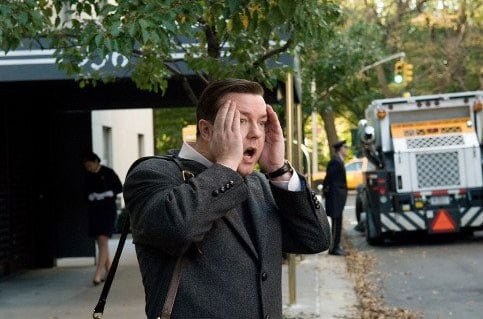 Dr. Bertram Pincus (Ricky Gervais) went into the hospital for a simple procedure but complications set in and he died. For seven minutes. He discovers that his brief time on the other side makes him to see ghosts. Manhattan is full of troubled spirits and they all want something, especially the late Frank Herlihy (Greg Kinnear) who hits Dr. B for a special favor only he can fulfill in “Ghost Town.”

After a colonoscopy made non-routine by his demand for full anesthesia, Bertram Pincus D.D.S. (Ricky Gervais, BBC's "The Office," "Night at the Museum") begins to see dead people all about the streets of New York City. The first to recognize that Pincus can see them, recently deceased Frank Herlihy (Greg Kinnear, "Little Miss Sunshine," "Baby Mama"), claims Bertram for his very own, dogging the misanthropic dentist until he agrees to help him save his wife from marrying the wrong man in "Ghost Town." Cowriter (with his "Zathura" colleague John Kamps)/director David Koepp has visited the supernatural before with the creepy "Stir of Echoes" and campy King adaptation "Secret Window." This time he takes the old fashioned route in a pre-worn romantic comedy formula enlivened by some spirited performances. Pincus hates people. He drowns out patients with his drill and sneaks away from the office celebration for the birth of his partner Dr. Prashar's (Aasif Mandvi, "Sorry, Haters," "Music and Lyrics") first child. He closes elevator doors in the face of a neighbor. He bridles at the admittance questions he is asked at the hospital (character actress Audrie Neenan goes toe to toe with Gervais) and needles his surgeon (SNL's Kristen Wiig, "Semi-Pro") before his procedure. When he returns to the hospital for an explanation as to why he is 'hallucinating,' he discovers (in a beautiful display of deadpan diversion by Wiig) that he was dead for 7 minutes. When Frank promises to leave him alone for good if he intervenes with his wife, Bertram resignedly agrees and begins on the wrong foot when she turns out to be the woman he's been slamming doors on and stealing cabs from. But Gwen (Téa Leoni, "Spanglish," "You Kill Me") is an Egyptologist and Bertram's dental expertise helps explain a mystery and so the two begin an awkward relationship. And so there is the expected romantic triangle, with Frank offering amused support to the bumbling Bertram in order to dethrone Richard (Billy Campbell), a human rights lawyer Pincus comes to see doesn't have an evil bone in his body. There is another reason Frank, and indeed all the various dead (three constructions workers, a mom (Dana Ivey, "Legally Blonde 2: Red, White & Blonde"), a naked guy, a WWII nurse, a Harley rider) are still walking around New York - they seek forgiveness - and Bertram is humanly humbled when he actually begins to help them. Bertram is even astonished when a ghostly father (Alan Ruck, "The Happening") makes him see a woman he previously viewed only with annoyance in an entirely new light. "Ghost Town" is formulaic, but its melancholy closing act gives it some heft, as does Gervais's 'otherness,' his desire to be left alone cutting him off from his city more than death has affected its ghosts. Gervais is so foreign to the human race, his performance raises the film out of its formulaic rut (let's ban the shock-hit-by-bus gag right now). Leoni may be too much of a catch for the Englishman, another de riguer formula of late, but her perplexed reactions are perfect and her sadness over the late revelation of just what Frank needs forgiveness for is touching. Kinnear only plays about two notes and is passable. Mandvi offers solid support and Wiig steals every scene she's in. "Ghost Town" is no cinematic revelation or award contender, but it's sweet and sad and a solid vehcile for Gervais's American debut as a leading man.

Frank, talking on his cell phone to arrange a love pad for him and his mistress, meets an untimely death when hit by a bus. He, and all of the other stranded souls, left this mortal coil with unresolved life issues. He is the first to meet Bertram following the dentist's brief encounter with death and asks the man to do him a favor: break up the pending marriage of his widow, Gwen (Tea Leoni). This, Frank is sure, will release him of his earthly ties and permit him to move on to a better place. The rest of the spirits in town, though, have the same idea and bombard Pincus with requests for help. The only problem is, Bertram is not a people person, alive or dead, and he refuses to help Frank or any of the others. His decision, however, falls on deaf, dead ears and the multitude of spirits keep hounding Bertram for help. Then, Frank makes Pincus an offer he cannot refuse: if Bertram does him the favor, Frank will make the rest leave him alone. Reluctantly, the dentist agrees and sets out to end Gwen's engagement. He does, but Frank still remains earthbound and he and Bertram have to figure out the real reason his soul will not pack up and leave. Director David Koepp, with co-writer John Kamps, takes a comic turn with an amiable ghost story that uses its stars to good effect. Ricky Gervais plays the selfish, rude and irascible Dr. Pincus with his typical comedic flare as he resolutely refuses to help anyone, living or dead. Greg Kinnear displays the relaxed demeanor, even though dead, of a man used to getting what he sets his sights on. Tea Leoni has the tough role of being the object of Bertram's and Frank's attention and the actress does a solid job as the lovely, lonely Gwen. The copious supporting cast, mostly the spirits of the dead, lend a sad, funny note in their plight to find peace. Techs are solid with good attention to detail. The living pass through the dead in an amusing way reminiscent of 1990's "Ghost" and each time it happens, the mortals sneeze. (Makes you wonder, does it not?) The romance that builds between Bertram and Gwen is nicely handled, too.