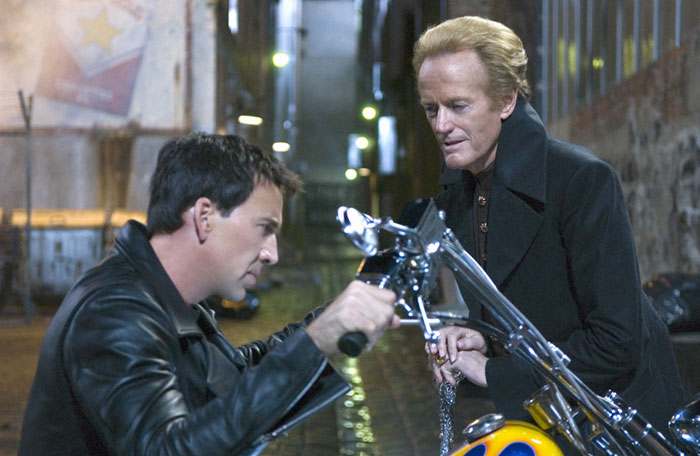 Young stunt motorcyclist Johnny Blaze (Matt Long) is stunned by the news that his father/mentor/friend/partner, Barton Blaze (Brett Cullen), is dying of cancer. The junior Blaze crosses paths with a mysterious man named Mephisopheles (Peter Fonda) who says he can cure his father for the price of a mere drop of blood – and Johnny’s soul – in Ghost Rider.”

OK, turning “graphic novels” into movies is a tricky proposition. Hits, like “The Crow” and, to its fan base of millions, “Spiderman,” are fine adaptations of their original work, maybe even better. My hope is that the original material for “Ghost Rider” is better than the long, rarely amusing or entertaining video comic book that it spawned. The story starts with young Johnny selling his soul to the Devil to save his dad, only to have to deal backfire (with Mephistopheles’s help). Jump to years later and an older Johnny (Cage) is putting his life on the line with bigger, more dangerous motorcycle stunts. He bumps into his long ago love, Roxanne Simpson (Eva Mandez), now a beautiful TV reporter assigned to interview Johnny, and old sparks rekindle. But, there’s trouble afoot when the son of Satin, Blackheart (Wes Bentley), and his evil minion arrive on Earth to find the lost contract that sold the souls of an entire town to the Devil. If Blackheart can fin that scroll, he will have the power to challenge his father for the right to rule mankind with an evil fist. Mephistopheles invokes his long quiescent deal with Johnny and the daredevil biker turns into flaming, powerful and invincible Ghost Rider. This “boy gets girl, boy loses girl when he sells his soul to the devil, boy gets girl back and uses his supernatural power to fight evil” story – woops! I just gave the whole thing away – is long on fiery CGI action and short on character development. This, I suppose, makes sense since two-thirds of the movie is the former, leaving little time for the later. As such, “Ghost Rider” (based on the Marvel comic series) is for fan boys (and girls) only. I, not a fan boy, was bored to tears and just wanted the nearly two hour comic book video to end. There is nothing that I’ve not seen done before, and better (I immediately think of the much-maligned “Constantine”). Acting is of a caliber with the simplistic story. Cage is OK as the earthly Johnny Blaze but is off screen most of the time when he morphs into Ghost Rider. This is not a stretch for the man who gave the brilliant turn in “Leaving Las Vegas.” Eva Mendez is oddly developed as Roxanne. On one hand she is the innocent, Polly Purebred type. On the other, she is decked out in tight fitting costumes with va-voom cleavage and long, shapely legs. I guess she’s supposed to be every boy’s dream of the girl next door. Wes Bentley is all right as the spoiled evil son of the Devil and supernatural Brat Pack leader, Blackheart. Peter Fonda nearly dodders as the Prince of Darkness. Sam Elliott lends his gravelly voice and craggy good looks well as the Caretaker, Johnny’s muse, and my favorite thing about “Ghost Rider.” All in all, a bunch of good actors with nothing to do. Techs are on a par with the rest of the film with lots of visuals as GR rides his blazing bike by night, fighting evil wherever he finds it. One blazing wake of destruction after another is pretty much the meat of this CGI roller coaster ride that sticks with you about as long as the popcorn you get at the multiplex. Warning: for comix fans only.