GETT: The Trial of Viviane Amsalem 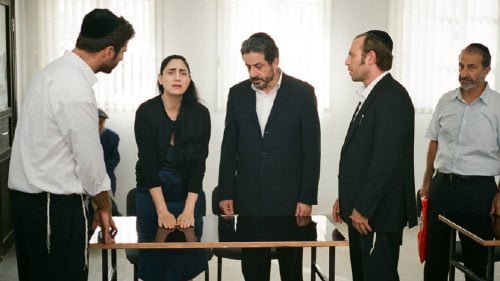 In Israel, divorce is not a matter for the civil court but for the rabbinical judges to decide. One woman, Viviane (Ron it Elkabetz), no longer wants to be married to her husband, Elisha (Simon Abkarian), and goes before a triumvirate of rabbis to plead her case. The law says that a husband must consent to the divorce and Elisha refuses to, repeatedly and for years, in “GETT: The Trial of Viviane Amsalem.”

In Israel, all marriages and divorces fall under religious law. When a woman marries, she gives up her right to 'gett,' or divorce, which only her husband can decide. After twenty years of marriage, Viviane (Ronit Elkabetz, "Late Marriage," "The Band's Visit") moved out of her home and hasn't spoken to her husband Elisha (Simon Abkarian ("Casino Royale," "Yes") in three years, but she will struggle for three more in court with Head Rabbi Salmion (Eli Gorstein), who will try his utmost to bring reconciliation and preserve a Jewish household in "Gett: The Trial of Viviane Amsalem." Sibling writer/directors Ronit & Shlomi Elkabetz turn a spotlight on an Israeli women's rights issue using drama, comedy and farce in a stylized courtroom procedural like no other. In addition to her behind the camera work, Elkabetz gives a powerhouse performance as the woman driven to distraction by the illogical authoritarianism of the men who control her fate. At turns tragic, infuriating, sly and funny, the Elkabetzes use supporting characters as witnesses to illuminate various points of view on their subject. At first we do not see Viviane, only hear her being discussed. The woman represented by the handsome, progressive Carmel (Menashe Noy, "Big Bad Wolves") makes a chaste and serious impression, dressed severely in black, anger simmering below the surface. In the spare, neutral courtroom (the film takes place entirely in this room and its antechamber), Elisha entreats her to return to her home directly in French. The judge rules that she should live with her husband for a trial period of six months, then return for reassessment. The use of countdown title cards is almost a joke in and of itself as Viviane and her lawyer return again and again, usually to discover Elisha has not shown up. Viviane's reactions range from fury (at one point she accuses the judge of being afraid to make a ruling) to resignation to a sexual, feminine rebellion (red painted toenails!, literally letting her hair down). When her controlling husband is in the room, the two communicate through looks which speak volumes, but the witnesses' testimony, with the exception of Viviane's hilariously outspoken, modern sister-in-law Rachel (Rubi Porat Shoval), requires reading between the lines. Elisha's brother Shimon (Sasson Gabay) betrays his friendly recognition of his brother's wife by upholding his brother's rights, as does a righteous neighbor, but although the neighbor's wife, Mrs. Evelyne Ben Chouchan (Evelyn Hagoel, "A Matter of Size"), appears to agree with the sanctity of the Jewish household, it is evident the woman is afraid of her husband. Viviane must also see her reputation questioned when Shmuel (Avrahram Selektar) testifies to having seen her at a cafe with another man. (Viviane attempts to set the record straight by stating that that man was her lawyer but there is an evident simmering attraction between the two.) Editor Joëlle Alexis ("The Green Prince") adjusts the film's beats to the directors' shifting tones while the filmmakers keep their camera in line with character point of view, using close-ups for unspoken punctuation. The limited setting contributes to a feeling of claustrophobic oppression, but the dynamic pacing ensures suspenseful engagement. Israel's submission for the Foreign Language Oscar and Golden Globe nominee won Best Film and Supporting Actor at the Israeli Film Academy awards. "GETT: The Trial of Viviane Amsalem" is the type of movie that should foster plenty of post-cinema conversation. Grade:

Do you remember (or heard of) those classics of marital bliss - “Divorce Italian Style (1961)” and “Divorce American Style (1967)”? Those films gave cultural insight into those two countries’ social mores. Filmmaking siblings Ronit Elkabetz (who is also the titular character) and Shlomi Elkabetz bring their own insight to a film that could just as easily been called “Divorce Israeli Style.” “GETT” takes place exclusively in the stark courtroom where three rabbis make judgment on Viviane’s many requests for divorce. She is represented by Ya’akov Ben Harouch (Shmil Ben Ari), a progressive advocate to Viviane’s cause and he stands by her in her years-long battle for freedom from Elisha. But, the husband she no longer loves or lives with adamantly refusing to grant the divorce without any reason. What “GETT” does best is portray the anger and frustration Viviane feels as week after week, month after month and year after years she is constantly denied her “right” to divorce. Ronit Elkabetz does a terrific job in finding an intelligent, passionate character in Viviane and she garners both sympathy and empathy for the embattled woman. Ben Ari, as Viviane’s legal counsel, is also first rate, expressing his utter astonishment and anger at the miscarriage of justice his client endures for years. Simon Abkarian, as taciturn and stubborn be Elisha and the actor plays the husband mug and aloof to his wife’s needs. Though there is no action, there is vibrancy to the dialog that enthralls for the duration of the film. We feel the same frustration that Viviane has and we invest ourselves in her years’ long fight for control of her own life in a society that treats woman as second class.