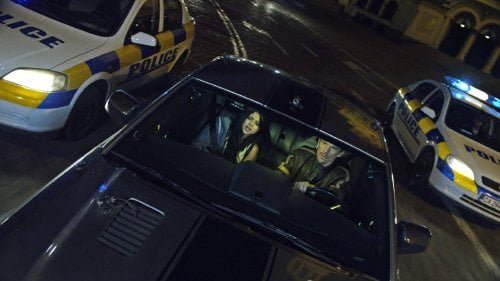 When his wife is kidnapped and he's given a clocked ultimatum, former race car driver Brent Magna (Ethan Hawke, "The Purge," Before Midnight") carjacks a Ford Shelby GT500 Super Snake and its teenaged owner (Selena Gomez, "Spring Breakers") to get her back in "Getaway."

A kidnapping by Eurotrashy villains and an ex-race car driver named Brent Magna in a stud car - sounds like Warner Brothers is trying to fashion Ethan Hawke's own "Taken" franchise with "Fast & Furious" appeal and unintentional hilarity with that Pixar's "Cars" parody name. And then there's Selena Gomez as the daughter of a big deal investment banker, because of course Bulgaria, where this movie is set, is the seat of international banking. She also has the capability to reroute live video feeds and tap into police networks like any kid with a Smartphone and tablet. Add the kind of incoherent action editing that worships two police cruisers crashing in mid air with absolutely no set up for said mayhem and you've "Getaway," a movie that has exactly one interesting shot (a long, tracking POV shot from the Super Snake featuring choreographed near misses as it tails the SUV that's gotten away with Gomez). Hawke is one for three this year and he looks like he knows it in this movie while Gomez squanders any good will she got for "Spring Breakers." As 'The Voice' we see Jon Voight's (Showtime's 'Ray Donovan') stubbled chin and yellow teeth until a late breaking reveal after his ridiculous motivation is revealed, one that first time screenwriters Sean Finegan and Gregg Maxwell Parker work with desperate hope for a sequel. Director Courtney Solomon ("An American Haunting") makes one wonder what Alan Smithee's been up to lately.