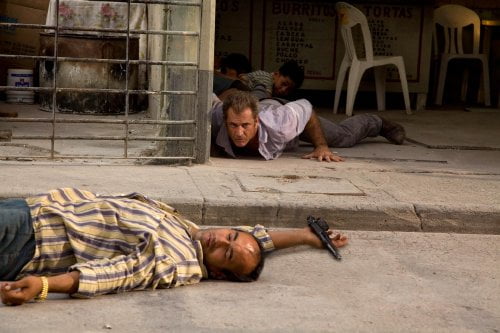 Following a big heist from the mob, Driver (Mel Gibson) and his partners in crime, with $4 million in the bag, race ahead of the pursuing police for the Mexican border and sanctuary. That is until they end up crashing through the border wall and into the hands of the Mexican police. He ends up in El Pueblito prison, a stranger in a strange land, but soon comes under the care and guidance of a nine-year old boy (Kevin Hernandez) in “Get the Gringo.”

When Driver escapes from U.S. lawmen by crashing through the Mexican border his troubles are just beginning. Incarcerated in El Pueblito prison and trying to get his stolen cash back from corrupt cops, Driver crosses paths with Frank (Peter Stormare, "Fargo"), a far bigger criminal than he, who tells his cronies to "Get the Gringo" Mel Gibson's "Apocalypto" assistant director Adrian Grunberg makes his feature writing (with Gibson and Stacy Perskie) and directing debut with this film which is making its debut on DirecTV VOD during the month of May. Whatever you may think of Gibson, he is a talented filmmaker and he has mentored well - Grunberg's made a crackerjack action film with tons of style. Gibson himself is in "Lethal Weapon-crazy" mode and his movie star charisma is still intact on screen. "Get the Gringo" begins with the gringo and his cohorts dressed as clowns, one bleeding out in the back seat. The clown garb is a nice reach back to Gibson's Stooges obsession which bubbled through in earlier roles. Grunberg establishes the prison as a ghettoized community complete with taco stands and nail kiosks where families can live with the inmates. Driver meets a 9 year-old ("The Sitter's" Kevin Hernandez) bumming a cigarette and soon learns more than he expects from the boy (the hastily denied smoke is handed over shortly). That the boy's single mom (Dolores Heredia) is attractive opens other possibilities. The film isn't flawless - there is an over reliance on Gibson's narration throughout and the story goes over the top - but even its flaws are enjoyable. Gibson's voice over is chockful of pithy observations ('You gotta love murderers who recycle.') and Driver's dilemma is complicated by his young friend's need to revenge the murder of his father. The film is well edited (Steven Rosenblum, "Braveheart") for both its comedic and violent beats and shot through with color and grit by cinematographer Benoît Debie ("Enter the Void," "The Runaways"). The Mexican flavored score is both obvious and ironic. "Get the Gringo" is a helluva entertaining B movie that deserved a theatrical release far more than most of the commercial junk food that is currently on screens. It's classic Gibson action - part ultra violence, part Looney Tunes.

Assistant director turned first time director Adrian Grunberg co-wrote the “Get the Gringo” script with his star, Mel Gibson, and Stacy Perskie and the result start off well but gets shaky and convoluted by its fuzzy ending. I had hopes (liking Mad Mel despite his ravings) with his latest actioner and for the first half of the film, with the chase, crash, arrest, imprisonment and entry into the bewildering El Pueblito, it really hooks you, I was engrossed in the place, the people (the inmates in the prison all carry guns) and, particularly, Driver and the boy. Gibson plays Driver as a tough, but vulnerable, career criminal who knows how to handle himself, normally, but is a fish out of water in El Pueblito until the boy takes him under his wing. He leads Driver through the dangerous waters and tells him who to trust and who to not. The relationship between these two disparate characters has great chemistry and the mutual affection each has for the other comes through. The prison itself has a great deal of personality and is a good backdrop for the story. About the story: as I said, the first half, with Driver learning to survive in his dangerous new home and the bevy of characters introduced, good guys and bad (mostly bad), harkens back to earlier Gibson action films. As the plot thickens – head bad guy Javi (Daniel Gimenez Cacho) needs an organ transplant, endangering the boy, and the authorities are planning to storm and destroy the notorious prison – Driver makes plans to escape the hell hole. This is where things get all tangled up with multiple story threads and copious action and violence that get out of hand for tyro director Grunberg. This is a Mel Gibson project and it shows the filmmaker’s imprint, maybe a bit too much for the sake of a novice director (although Grunberg has ample experience as second-unit director on many films). Still, I always enjoy seeing a Mel Gibson film (well, most of them) and, with a better script and a more seasoned hand behind the camera, could have been quite good. But it frays apart in the end.