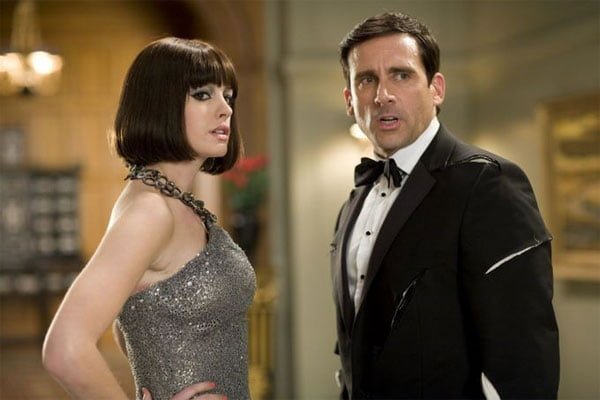 The Cold War is over and CONTROL is now a DC museum piece, but the Russians are still stealing nuclear materials and CONTROL still operates in secret underground. Maxwell Smart (Steve Carell, TV's "The Office," "Bruce Almighty") is a CONTROL analyst who the Chief (Alan Arkin, "Little Miss Sunshine") values too much to promote to the field, but when CONTROL and all its agents's identities are compromised by CHAOS, the only thing the Chief can do is "Get Smart."

When this project was announced, the idea of Steve Carell and Alan Arkin filling the shoes of Don Adams and Edward Platt sounded like dream casting, but director Peter Segal's had more misses ("Anger Management," 2005's "The Longest Yard") than hits ("50 First Dates") on the comedy front. Writers Tom J. Astle & Matt Ember ("Failure to Launch") are also no Mel Brooks and Buck Henry and so "Get Smart" is an awkward amalgamation of well played characters working with wildly uneven material that references newer films like "Point Break" and "Entrapment" as much as the original series. The result is neither here nor there. Continuing a trend begun with "Indy IV," the Warner Brother's logo is retrofitted into a vault door, the first of many which open aping the show's opener. But Max is now a paper pusher, albeit a thorough and intuitive one (and, therefore, already at odds with the original character). He dreams of becoming a field agent, like the suave Agent 23 (Dwayne Johnson, "The Game Plan"), and even passes the test, but that fails to impress Agent 99 (Anne Hathaway, "The Devil Wears Prada") when the Chief relents and sends the newly paired duo on a mission. During the plane trip, we discover why Agent 99 suddenly appears to be two decades younger than Smart (plastic surgery to change a compromised appearance) and see some semblance of the original character when Smart manages to eject himself from the plane's bathroom. Out in the Russian countryside, Max's history helps when he recalls a restaurant favored by CHAOS agents and falls upon info (in the bathroom again, using a modified "Austin Power's" gag) that leads them to the country manor of Ladislas Krstic (David S. Lee, "Blood Diamond"). This provides an opportunity for 99 to vamp it up and for one of the film's truly hilarious set pieces in which Max chooses a very plump dancing partner (Lindsay Hollister, "Postal") to compete against 99. Following their trail leads them to ultimate enemies Siegfried (Terence Stamp, "The Limey," "Smallville's" Jor-El) and his henchman Shtarker (Ken Davitian, Borat's nude wrestling partner) under cover of a Moscow bakery and onward to L.A.'s Disney Music Hall where a performance of Beethoven's "Ode to Joy" (that old chestnut) may be the key to a bomb meant to kill The President (James Caan, "The Godfather," "Elf"). Despite the conflicted writing of Smart's character, Carell does a nice job of giving his own spin while retaining some of Adams's ticks like his clipped speech (watch him turn on a dime when 99 introduces him as a retarded Russian farm hand). Given better material, Carell could make a series worthwhile. Also good is Arkin, giving the film's flat out funniest line reading during the action packed climax. Hathaway also grows into her role as a far more action-oriented 99 while Johnson proves himself yet again as a natural for comedy. There are droves of fine supporting players as well, like Masi Oka of TV's "Heroes" and Nate Torrence of TV's late, lamented "Studio 60 on the Sunset Strip" as new characters Bruce and Lloyd, office nerds who specialize in creating the wacky gadgets "Get Smart" was known for. Terry Crews ("Street Kings," TV's "Everybody Hates Chris") and (David Koechner, "Balls of Fury," "Semi-Pro") are also fun as Agent 91 and Larabee, who continually needle the office drones (Maxi-Pad is one of their endearments for Smart). Agent 13, always found stashed away in odd, stationery places in the TV series, is found only once and early on, played in a glorified cameo by Bill Murray ("Lost in Translation") in a non sequitur of a scene that will make little sense to neophytes. The only returning series cast member I spotted was the series original Siegfried, Bernie Kopell, as an irate driver. There are some funny lines in "Get Smart," more than I would have expected, but not enough of the show's particularly bent humor (that Agent 13 scene shouldn't have fallen flat and Smart's physical ineptitude should have been paired with some good old-fashioned cluelessness). The film's been given too much focus on action, done without enough wit. Still, if they can keep this cast and get better behind the scenes guys, there could be life yet in "Get Smart."