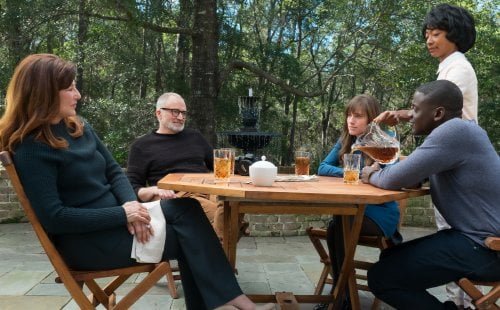 When Chris Washington (Daniel Kaluuya, "Sicario") goes upstate with his girlfriend Rose (Allison Williams, HBO's 'Girls') for the weekend to meet her parents Missy (Catherine Keener, "Where the Wild Things Are") and Dean Armitage (Bradley Whitford, "The Cabin in the Woods"), at first he thinks they and their friends' open-armed welcome is an over reaction to his skin color. Then he notices the strange behavior of Armitage housekeeper Georgina (Betty Gabriel, "The Purge: Election Year") and groundskeeper Walter (Marcus Henderson, "Pete's Dragon"), compounded by news of an unusually large number of black men having disappeared in the area. His good friend, Rod Williams (LilRel Howery, TV's 'The Carmichael Show') urges him to "Get Out."

Writer/director Jordan Peele (writer TV's 'Key and Peele,' "Keanu") puts a racial spin with a sly twist on his sharp horror film rooted in such classics as "White Zombie," "The Stepford Wives" and "Rosemary's Baby." There's a lot of fun to be had observing white people awkwardly trying to relate to the black newcomer in their midst, but the film is also genuinely horrific from both a genre and racial perspective. (In one squirm inducing sequence, we realize Peele's transformed a game of Bingo into the modern equivalent of a slave auction.) In a very creepy prologue, a young black man (Lakeith Stanfield, "Straight Outta Compton") wanders, lost in a suburban neighborhood at night. A white car follows, stopping when he stops. He reverses direction, but is tackled and kidnapped. The sequence is all the more eerie for being set to Flanagan and Allen's jaunty rendition of 'Run Rabbit Run.' We then meet Chris, a NYC art photographer, talking to his pal Rod about meeting Rose's parents that weekend. Rod advises against it, but when we meet the lovely Rose, we understand why Chris is going. He's a bit anxious that she hasn't told them that he's black, but she assures him that her dad 'would have voted for Obama a third time if he could have.' On the drive upstate, a deer leaps out of nowhere hitting their car. They're rattled, but things take an even more disturbing turn when the responding officer demands Chris's ID, even though he wasn't driving. Rose speaks up forcefully and the cop backs down. On arrival at the sprawling Armitage brick Colonial, the first thing Chris sees is a black groundskeeper. But he's literally embraced by Missy and Dean, who explains the black servants took such good care of his elderly parents, he didn't have the heart to let them go. He then shows off a photo of his father, whose big claim to fame was having been beaten by Jesse Owens in the 1936 Berlin Olympics. At dinner, Rose's obnoxious med student brother Jeremy (Caleb Landry Jones, "Antiviral") notes Chris's genetic makeup. Missy is displeased that he smokes, offering to hypnotize him to kick the habit. Chris, whose eyes never stop darting around his surroundings, nervously declines. That night he has what he thinks is a strange dream. Things go to another level the next day which Rose seems surprised is her parents' annual party begun by Dean's dad. Chris is told that Tiger Woods is the greatest by an old white guy and asked about the African American experience by an Asian guest. Rose is asked by the 70ish Lisa Deets (Ashley LeConte Campbell, "The Blind Side") if 'what they say is true' as she glances at Chris's crotch, her shriveled husband watching from his wheelchair. Chris is most disturbed by finding another brother, one who looks vaguely familiar. Logan King (Stanfield) talks and dresses oddly and is married to a white woman (Geraldine Singer, "21 Jump Street") twice his age. The only person Chris relates to is blind art dealer Jim Hudson (Stephen Root, "Office Space"). Peele lets all manner of strange detail build without succumbing to that horror trope of characters doing stupid things. Chris is on alert during his entire stay, prepared to bolt at just the right moment. The filmmaker's structure follows "Rosemary's Baby" with the depiction of a prior victim, paranoia in the midst of a different demographic, the pushing of curatives and the researching friend on the outside (we even learn Dean's dad's name is Roman). Peele has learned from a master how to suggest something off yet leave room for doubt. But he has laughs in mind as well, most coming from TSA-trained Rod's confidence in his investigative abilities. The ensemble is well cast, but Keener steals the show. With her dilated pupils and slit eyes, she's like a snake watching its prey. Peele also pays attention to the eyes of her character's daughter, Williams's lit like they're throwing beams of sunshine. With "Get Out," Peele has not only made an entertaining horror film, he's conveyed the unnatural discomfort felt by a black man walking in an unfamiliar neighborhood. Grade: