Get Out Your Handkerchiefs 2K restoration blu-ray 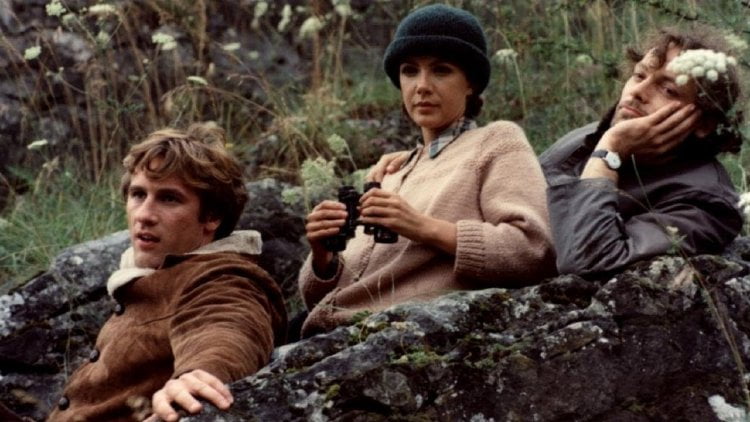 Observing his wife Solange’s (Carole Laure) depression, Raoul (Gérard Depardieu) taps Stéphane (Depardieu’s “Going Places” costar Patrick Dewaere) to be her lover hoping both to draw her out of her funk and impregnate her, a baby seen as the ultimate solution. But when the trio work at a boy’s camp during the summer, Solange shocks them both by taking up with bullied 13 year-old prodigy Christian (Riton Liebman) in “Get Out Your Handkerchiefs.”

Writer/director Bertrand Blier (“Beau Pere,” “Too Beautiful for You”) is known for his provocative relationship movies. This 1978 film, which won the Academy Award for Best Foreign Language Film, may be the most difficult for modern audiences to relate to, most notably for the sexual relationship between an adult woman and a child. Still Blier’s writing is sharp, his use of space mined for its comedic potential, his casting meticulous, especially in his return pairing of Depardieu and Dewaere whose bromance here is the film’s highlight. Every role is well cast, from a supporting turn from Michel Serrault as the neighbor who becomes another of Solange’s champions to Sylvie Joly as a passerby pulled into Raoul’s predicament to young Riton, a classic case of an older soul in a young body.

Everything begins over dinner in a French café, Raoul pleading with his wife whose desultory consumption of sauerkraut recalls the comedic stylings of Elaine May. Raoul wishes for nothing other than his wife’s happiness and is convinced that he is no longer it, so, noticing fellow diner Stéphane noticing her, he sits down with the man and offers his unique proposal, despite Solange’s apathy. While Stéphane sits and chats with Solalnge, Raoul pours out his soul to a woman on the sidewalk (Joly, in a bit right out of a Woody Allen movie), who returns with him and whose female perspective causes Solange to begin sobbing - finally, a reaction! Raoul and Stéphane go off on a long walk, later bringing Solange back to the apartment Raoul has been fixing up at his wife’s direction.

After a falling out between the two men, Raoul shows up at Stéphane’s work 250 km away, his situation now complicated by the dizzy spells causing Solange to faint. They agree to a weekend away, but ironically Stéphane cannot perform thinking about his partner’s husband sitting in a bar below. Solange takes up residence in his bachelor apartment, crammed with a complete collection of Pocket Books and the music of Mozart.

Before we get to the thirteen year-old lover (who Solange at least resists until he woos her like a soldier going off to war), we also must suffer the sexist attitudes of the time. Solange is the ‘little woman’ who knits and arranges flowers and who ‘needs a baby.’ She is so submissive that at one point Stéphane suggests that maybe she’s just ‘simple minded.’ Raoul actually pauses before rejecting the idea because he couldn’t possible love an unintelligent woman. Solange also spends a large amount of the film knitting while nude (her marled sweaters are one of the film’s running gags). Just remember that this all seemed far more ‘normal’ in 1978, when Bertolucci’s “La Luna” would feature a mother’s incest with her teenaged son the next year, Blier again stirring controversy in 1981 with his “Beau-père.” Even 1977’s “Between the Lines” set within a progressive Boston newspaper and directed by Joan Micklin Silver stripped its women of their tops with abandon.

“Get Out Your Handkerchiefs” is less about Raoul and Solange’s marital woes than it is about the men who gather together to make her happy and it is Christian Beloeil of the 185 IQ who finally gets her to laugh at the expense of the older men. They’ll have you laughing as well, a ‘beautiful friendship’ that survives a prison sentence for kidnapping. Blier makes great use of long, narrow hallways to frame their antic movements and features three climactic kisses – two one-sided ones at train stations and one reciprocated one in a boys’ dormitory.

The 2K restoration is crisp and richly colored on Cohen Media’s new blu-ray which also includes both the original and new trailers and a short introduction by Richard Peña.

French romantic farces have been around for many decades. Which brings me to the new, blu-ray release of Bertrand Blier’s 1978 classic of that genre, “Get Out Your Handkerchiefs”

I remember, way back in the 1970s, when “Get Out…” was playing at the old, long-gone Orson Welles Cinema just outside of Harvard Square, Cambridge, and it had a long run – weeks, maybe months. But, I never saw the film. That has been rectified with the re-release of the light-hearted comedy and I am glad my former loss is now my gain.

Brace yourself for a very young (I mean, like, a real youngster) Gerard Depardieu as Raoul, married to the chronically depressed and lethargic Solange (Carole Laure). She shows no interest in just about anything, including Raoul.

One night, while having dinner at a restaurant, Raoul makes a decision. He approaches a stranger, Stephane (Patrick Dewaere), and unceremoniously offers him Solange. Then, the romantic French farce kicks into high, manic gear as the odd couple of Stephane and Raoul join forces to make Solange happy.

This mission dovetails nicely as the duo pull in others, even total strangers, to help in their quest, which comes to involve a 13-year old boy, Christian (Riton Liebman). I will leave it to you to enjoy this absurdist and silly, goofy and fun little comedy as it unfolds. The extras on the blu-ray are scant, at best.