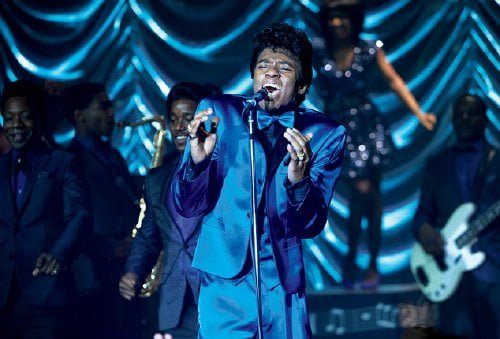 James Brown earned the title, the Godfather of Soul, and over six decades he changed the sound of music for America. He was also known as the Hardest Working Man in Show Business and director Tate Taylor (“The Help”) brings the story of the man and his music to the big screen with “Get on Up.”

James Brown (Chadwick Boseman, "42") was abandoned, first by his mother Susie (Viola Davis, "The Help"), then by his father Joe (Lennie James, AMC's 'Low Winter Sun'), who left him to be brought up in the brothel run by Aunt Honey (Octavia Spencer, "The Help") when he went to fight in WWII. From his wooden shack beginnings through a hardscrabble life as a teen, Brown found his nitch when Bobby Byrd's (Nelsan Ellis, HBO's 'True Blood') Gospel group performed for prison inmates. Byrd sprung Brown, sticking with the man who became something of a meglomaniac. His life is recounted with impressionistic strokes, jumping around in time and breaking the fourth wall in "Get On Up." Was director Tate Taylor so enamored of his "The Help's" subplot about biracial bathroom sharing and excrement that he felt compelled to begin his sophomore film with more of the same? The extended opening of the movie showcases Brown's erratic behavior as he berates lecture attendees utilizing a room in his offices for using his private bathroom, embarrassing a woman then shifting gears by telling her she was being true to her own needs. It's an odd, extended beginning for a biopic on the Godfather of Soul. "Edge of Tomorrow" screenwriters Jez & John-Henry Butterworth continue their time tripping formula as we veer from 1988 to a 1968 scene of Brown and his entourage's plane under attack approaching a gig for Vietnam troops then back to the 30's (the young Brown is played by Jamarion and Jordon Scott). But the device, which usually provides highlights before filling in psychological blanks, is more surreal than illuminating. Sometimes the film can be just plain head-scratching, backup singer Yvonne Fair (Tika Sumpter, "Sparkle") introduced only to glare from onstage at Brown's future second wife, DeeDee (Jill Scott, "Why Did I Get Married Too?"), in the audience, before vanishing altogether. Aunt Honey will take the young Brown that he's special, but the ego that ultimately emerges is never grounded in past experience. We do, in one of two phantasmagorical childhood scenes, see the young boy wander into a revival meeting led by a Brown-like preacher, people swirling about, a vision in white. In another, the young boy will participate in boxing matches, young black boys blindfolded with one hand tied behind their backs, pummeling each other for the entertainment of rich whites as the band plays on. We learn of Brown's early chutzpah as he's welcomed into Byrd's family only to be caught seducing Bobby's sister. When he and his Famous Flames catch a Little Richard (Brandon Smith, TV's 'So Random!') show, they take to the stage during his break. His arrogance loses him valued musicians, but Bobby stays, until even he cannot take it anymore when Brown refuses to acknowledge his own talent after the famed 1971 show at Paris's Olympus Theater. Trusted long time manager Ben Bart (Dan Aykroyd, affecting) is used as a vehicle to demonstrate Brown's business sense as he cuts out middle men, paying local DJs to promote his act. There is the strained reunion with his mother at the Apollo and the peace keeping at the Boston Garden concert right after MLK's assassination (with "Stepbrothers's" Jason Davis giving perhaps the worst approximation of a Boston accent ever as Mayor White). Wives drop in and out, the DeeDee years chronicling Brown's controlling and abusive behavior. Drug use is hinted at once (the PG-13 rating working against the subject matter). Boseman, who looks nothing like Brown, is nonetheless convincing, nailing his raspy, slurred speech, jaw dropping dance moves (Brown's own recordings are used for performances) and ego leavened with sensitivity. Ellis continues to impress with range that has taken him from 'True Blood's' flamboyant Lafayette to "Secretariat's" religious groomsman. His Bobby Byrd is a humble and loyal man, acknowledging his place at Brown's side. The film also stars Craig Robinson (TV's 'The Office') as disgruntled Flames saxophonist Maceo Parker, Fred Melamed ("A Serious Man") as musical entrepreneur Syd Nathan, and Jacinte Blankenship as Brown's first wife Velma. John Benjamin Hickey (Showtime's 'The Big C') and Allison Janney (TV's 'The West Wing,' 'Mom') portray racist hotel guests and Nick Eversman ("The Runaways") plays Mick Jagger (one of the film's producers), waiting in the wings during the legendary 1964 T.A.M.I show (where Jagger copped his moves). "Get On Up" certainly gives Brown his due, but the filmmakers' approach leaves nagging questions while starting to wear out its welcome at 138 minutes. Still, the film has enough funkitude to work more often than not. Grade:

This is a straightforward biopic that tells the story of the iconic music man James Brown, from his days as a boy raised in poverty to his arrest in 1988. Taking chapters from his life, it tells of his early days as a poor boy growing up in rural Georgia and how he was influenced by gospel music during his formative years. The film is structured to show the numerous events in the singer’s long and sometimes turbulent career for Soul Man No. 1. Chadwick Boseman, though not looking like Brown who had one of the most recognizable faces in show business, does Brown’s gravelly speaking voice quite well. (All of the James Brown music is from the artist’s recordings, a good thing for any fan of the man.) Boseman also does a credible job recreating Brown’s patented moves, his crazy legs and famous splits very well. The supporting cast is exemplary. Viola Davis is sympathetic as James’s mom, Susie, and it breaks your heart when she is forced to leave her son to her loutish husband, Joe (Lennie James), at gunpoint. Viola Davis is terrific, as usual, as Aunt Honey, the owner of a brothel where Joe leaves his son to go join the army - this is when young James makes his acquaintance with the music that would make the man. Dan Ackroyd is outstanding as Ben “Pop” Bart, James’s music manager and long time muse and there is real chemistry between him and Boseman. Nelsan Ellis (Lafayette in HBO’s “True Blood”), as James’s long time collaborator and keyboard player Bobby Byrd, also has a natural feeling relationship with Brown. The film begins with a manic Brown waving a shotgun around at a storefront seminar and terrifying everyone inside. Then, we flash to 1968 and Brown’s tour for our troops in Vietnam and his (and his band’s) harrowing, explosive entry to the country under fire. From here, the flash back and forth editing brings us to all the key aspects of Brown’s life and career. I do not want to tell of the many events of his music, his elaborate stage shows and his forming as an artist – signature hairdo and cape are only a couple aspects of his trademarks – to greatness. Any fan of James and his music should and, undoubtedly, will see this film. But, anyone who has heard and appreciated his evolutionary sound should check it out, too. “Get on Up” is not a great biopic but it is sure a good one.