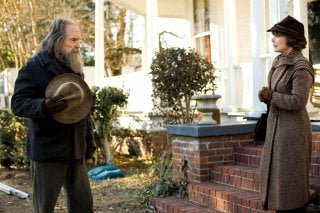 In a small Southern town in Caleb County pre-WWII, Felix Bush (Robert Duvall) is the hermit everyone's heard stories about. The town's boys have long made their way out to his remote cabin to throw rocks at his windows. One surprising day, Felix hitches his mule to a cart and rides into town. People scatter, but Reverend Gus Horton (Gerald McRaney, TV's "Major Dad," "Jericho") has to listen and discovers Bush wants to plan his funeral, but without repenting to the Lord, a prerequisite Horton sets. It'll take the financially strapped local mortician, Frank Quinn (Bill Murray), to help Felix "Get Low."

Writers Chris Provenzano ("Mad Men," "Justified") and C. Gaby Mitchell have taken the true story of Felix Bush and worked in a fictional motivator to give their antihero a redemptive arc. First time feature director Aaron Schneider, a cinematographer ("Simon Birch") who also edits here, unsurprisingly delivers a stunning looking film, but that mysterious hook the filmmakers have thrown us begins to numb before the final, climatic revelation. Still, Duvall's in peak form with a role that seems tailor made for him and the film has regional and period veracity. The film begins depicting Felix's mystery without giving it away. A house is engulfed in flames in deep darkness. We see a figure, burning, roll from the upper floor and run and then we're catapulted to the present day where an old man with long hair and a long beard gets his rifle out to scare away those pesky kids. Buddy Robinson (Lucas Black, "The Fast and the Furious: Tokyo Drift," "Legion") witnesses Felix's much talked about trip to town, which ended with Bush beating down the much younger Carl (Scott Cooper, "Gods and Generals") after the man told him to get out and threw rocks which upset Felix's beloved mule (Gracie, a true equine star). When Buddy tells his boss, Frank Quinn, about Felix's trip, Frank insists they not miss an opportunity for a sale. The two drive out to Felix's spread and Quinn announces that this will be Buddy's first shot at making a sale. Buddy trepidatiously approaches the cabin, is held down by gunfire, then finally welcomed in. And what Buddy discovers is that there's a lot more to Felix that the townspeople's vicious gossip. Their long chat over Felix's excellent rabbit stew brings Felix back into town where he lays out his wishes for Frank - he wants a 'living funeral,' a party he will attend and where anyone who has a story to tell about him is welcome. This unique idea isn't as simple to pull off as it might seem, so Frank throws his marketing skills into overdrive, creating a poster of the 'mad' Felix Bush announcing the event before Frank gets himself a new suit, shave and a haircut. Frank books a radio appearance and Felix throws another curve ball - they'll sell $5 lottery tickets for a drawing for his enviable property. It's the why, though, that the filmmakers use to keep stringing us along. We learn that the widow Mattie Darrow (Sissy Spacek) once had a thing for Felix, but a touching reconnection uncovers a painful truth. Felix commandeers Buddy to 'drive north' and visits Illinois preacher Rev. Charlie Jackson (Bill Cobbs, "Sunshine State," "Night at the Museum"), whose Church may have been built by Bush but who nonetheless refuses to speak at his funeral. Jackson's an old friend, but his reluctance appears to spring from the same spring as Horton's. Felix is always asking those who mention the stories about him to tell one, but we only hear of the vaguest innuendos - he killed two people, he may have done this or that. As written the story features a lot of great dialogue, especially when the hitherto taciturn Bush begins to open up. But the story itself begins to feel padded, a subplot involving attempted robbery of the lottery cash trails off and then when we finally get to the funeral it all seems so anticlimactic. Duvall, as already noted, is terrific, perhaps even Oscar nom worthy here, but the usually piquant Murray's otherworldly comic schtick feels somewhat out of place here. As his assistant, Lucas Black paints a strong portrait of a naive young family man rolling with a most unusual situation. Cobbs embodies the ambiguity of Bush's past with his mixture of affection and resistance to the man. The film is stunning to look at photographed by David Boyd, whose work on another 30's era film, "Kit Kittredge: An American Girl," has been built upon for this. Art direction and costume design all work to put us in 1930's Appalachia, as does the score by Jan A.P. Kaczmarek ("The Visitor"). "Get Low" is a funky bit of regional filmmaking whose mature cast helps gloss over some of the inexperience of its promising director.