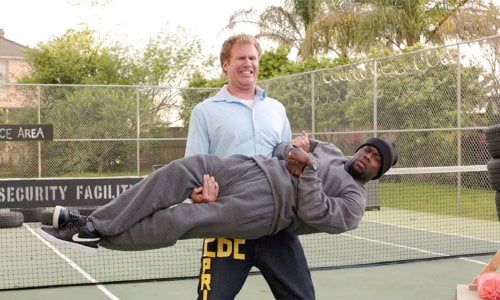 Millionaire hedge fund manager James King (Will Ferrell) is terrified after a securities fraud indictment nets him a San Quentin prison sentence. With only 30 days to get his affairs in order, James turns to Darnell (Kevin Hart), the guy who washes his car, for a crash course in prison survival. But James has made unfounded assumptions and gets ham-handed training from a guy who's never seen the inside of a cell to "Get Hard."

Don't listen to the PC police - "Get Hard" isn't leaning on racial stereotypes so much as sending them up and a heterosexual's distaste for performing homosexual acts is as homophobic as the reverse would be heterophobic. Pairing Ferrell's looming, kooky calm with Hart's pint-sized, pugnacious bluster proves a complimentary meshing, rising star Hart's incredulous observer an audience stand-in for Ferrell's boor-out-of-water style comedy. Cowriter (with 'Key and Peele's' Jay Martel & Ian Roberts) Etan Cohen, the man who put Robert Downey Jr. in black face in "Tropic Thunder" (the concept is name checked here as a very bad idea) makes his directorial debut pushing envelopes fast and furiously. King is a Master of His Universe, awakening in his Bel Air manse with hot fiancee Alissa ('Community's' Alison Brie), whose daddy Martin (Craig T. Nelson, TV's 'Parenthood') is his boss, a 'self-made' man who pulled himself up by his bootstraps and his own dad's $8 million seed money. King practices the Brazilian martial art Capoeira under his trainer's rolling eyes and surveys his estate in the nude to the consternation of his gardener Cecelio (Erick Chavarria, "The DUFF"). When a black man approaches him in his office garage, he locks his doors and screams bloody murder. That would be Darnell, the man who runs Hollywood Luxury Bubbles car detailing service who's looking for $30K to put down on a new home with a better school district for daughter Makayla (Ariana Neal, "Fruitvale Station"). When Darnell asks King to invest in his business, he's given a condescending lecture on the value of hard work. Things change when the desperate King turns to Darnell as a man who 'obviously' knows the ropes around a prison yard. Darnell sees an opportunity to get his down payment and goes along. The next thing King knows his wine cellar's been converted to a prison cell with a bucket for a toilet, his tennis court is hemmed in with barbed wire and his household staff is really getting into new roles as fellow inmates and guards. But King doesn't have any fight in him, can't bring himself to learn the fine art of sexual favors (with 'Veep's' Matt Walsh in a bathroom stall) and is easily outed by both Darnell's cousin, Crenshaw King gang leader Russell (T.I. “Tip” Harris), who dubs him Mayo, and Spider (Christopher Berry, "12 Years a Slave") of the Alliance of Whites. Running out of time, Darnell's practical wife Rita (Edwina Findley, HBO’s 'Treme') suggests the only real way of helping King is to prove the innocence he's claimed all along. The film's humor is derived from trying to toughen up a coddled, clueless white man and the bad guys are entitled Wall Street thieves and white supremacists. The filmmakers go a bit easier on Russell's gang, milking them for comedy, but their initiation rite of murder is something Darnell, a hard working family man estranged from his cousin, saves his least likely friend from. No gay people are derided for their lifestyle - in fact, Darnell befriends Chris (T.J. Jagodowski, "Oz the Great and Powerful"), a man who forms a crush on him (his objection to the come-on - Chris is 'a 6' while Darnell assesses himself as 'a 9'). Cohen and Ferrell push the raunch factor with male nudity, King's appreciation of Crenshaw Shonda's (Dominique Perry) rump dance, that literal gag in a bathroom stall and King's odd embracement of 'keistering.' John Mayer alarms Jimmy Fallon on The Tonite Show with a song he's written about King that shouldn't have gotten by censors. Ferrell comedies tend to be hit and miss and this one's no exception, but it's certainly got more honest laughs than most. Watching King react to Darnell's 3-way 'prison yard' improv of Leroy, Carlos and Dante or his staged light strobing prison riot is worth the price of admission alone. Grade: