George A. Romero's Land of the Dead 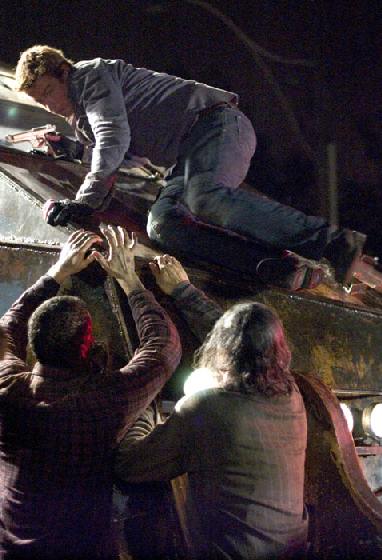 'In a world where the dead are returning to life, the word trouble loses much of its meaning.' Dennis Hopper as Kaufman, "Land of the Dead"

Almost forty years ago, the dead began to rise and feed off human flesh. In the ensuing years, consumerism, materialism, elitism and racism have taken hold of those who still live. Kaufman (Dennis Hopper, "Knockaround Guys") controls a locked down city where the haves live in Fiddler's Green, a luxury condominium complex while the have-nots eke out a hardscrabble existence on the city streets. They're protected by fences and a river and Kaufman's crew, who venture out for supplies in Kaufman's multi-million dollar armed vehicle, Dead Reckoning. But crew leader Riley (Simon Baker, "The Affair of the Necklace," "The Ring 2") has noticed an unnerving development - the dead are beginning to act like the living. There are signs of intelligence in "George A. Romero's Land of the Dead." Horror meister Romero caps his zombie trilogy ("Night of the Living Dead," Dawn of the Dead," "Day of the Dead") with a fourth installment which, while derivative, still shows the writer/director's ability to meld gore with social statements. In "Land," zombies are now the new bottom of the class system, subject to indignities which enrage their leader, Big Daddy (Eugene Clark, a Black man, taking Romero full circle back to his original Black hero Duane Jones). In Romero's world, even zombies are entitled some rights. The film, unfortunately doesn't live up to its extremely creepy opening title sequence, a black and white mini-history that melds the original "Night" with the artistry of "7even's" titles. (For that matter, "Land" is never as effectively scary as last year's "Dawn of the Dead" remake either.) What it does have is the odd moment of sharp writing, a good cast and some truly inventive new gore gags (Make Up and Special Effects Make Up Supervisor Gregory Nicotero, "Kill Bill Vols. 1 & 2"). The film begins with a giggle as a diner's arrowed 'EATS' sign points to the action. Riley and his riders are gathering supplies under cover of fireworks (referred to as sky flowers, as in 'Put some flowers in the graveyard'), a showy display which keeps the undead transfixed to the sky. But Riley's got trouble from lower crew leader Cholo (John Leguizamo, "2005's Assault on Precinct 13"), a renegade who disobeys orders to procure luxury items for trade on the black market and acceptance into Fiddler's Green and Kaufman's inner circle. When they return to the city, Riley and his slow-on-the-uptake, fast-on-the-trigger pal Charlie (Robert Joy, "Joe Somebody") discover that a local club owner has begun tossing humans into a zombie pit, gladiator style. He rescues prostitute Slack (Asia Argento, "xXx"), but the threesome are thrown into jail. Turns out she was tagged by Kaufman for having teamed with Mulligan (Bruce McFee, "Knockaround Guys"), a Marxist street crusader. Having paid with one of Riley's men, Cholo delivers a case of champagne to Kaufman and tells him he now has enough cash to move into the Green, but Kaufman has no intention of letting his likes into the complex and throws him out. Cholo and his gang, Chihuahua (Phil Fondacaro) and driver Pretty Boy (Joanne Boland), take Dark Reckoning out for a $5 million dollar ransom. Kaufman's forced to spring Riley from jail to bag Cholo, but sends Riley's trio out with one of his own. Meanwhile Big Daddy is leading an army of undead towards the city - and they're getting slowly smarter and picking up weapons along the way. It's amusing to see Romero align his heroes (Riley's splinter group) with the zombies this time around but it works. The other two groups are clearly the bad guys - Cholo and Kaufman clearly both feed off their own. As if underlining his political point, Romero has Kaufman consistently spout off about how those outside the Green, living and undead alike, have no rights. The oppression of the zombies is cleverly noted in a street children's "Punch and Zombie" puppet show, giving even the downtrodden a group to despise. Zombies are chained for the entertainment of the living, who sidle up in evening wear for posed photographs. Big Daddy discovers his own strung up with archery targets attached to their midsections, a weird lynching of the undead. West, who surely thought his career would be elsewhere by now, takes on the good guy zombie killer mantle well. He's ably assisted by Joy, who works a repeated line commenting upon his own badly scarred face nicely. Also noteworthy are Pedro Miguel Arce as the aptly named Pillsbury and Sasha Roiz (2005's "Assault on Precinct 13") as Manolete. Joanne Boland, resembling a young Amanda Plummer, is spunky as Dead Reckoning's driver but the more well known Argento just suffices as Spark. Through a bit of plotting, Leguizamo is able to maintain some sympathy and move Romero's class theme forward ('I've always wanted to see how the other half live' becomes a nice bit of irony from Cholo's mouth). Hopper expends enough energy to make Kaufman a real creep if not putting him over as a legendary villain. The zombies are notably led by Clark, who projects the menace, anger and a sub-Neanderthal level of intelligence Big Daddy requires. Boyd Banks ("Cinderella Man") is Daddy's right-hander (everyone in this movie has one!) Butcher, named for the meat cleaver which becomes a multi-faceted tool. Jennifer Baxter ("Knockaround Guys") is always recognizable at Big Daddy's side as Number Nine, a blond, track-suited corpse with one cheek missing and the habit of cocking her head when confronted with new ideas. The zombie horde does stop for constant snacking though, with such new flourishes as pulling a person's throat out through his mouth and snapping a head that's been hidden, hanging down its back, forward to take an unexpected chomp. Oh, and watch for the clown zombie, sure to give those with coulrophobia a whole new set of nightmares.

Back in 1968 the dead came back to life and humankind had to fight for its very existence. Now, the undead have multiplied and only a few bastions remain to protect the living in “George A. Romero’s Land of the Dead.” The undead encroach on the barricaded city that houses what is left of the human race. But the survivors have not learned the lesson of the apocalypse and class struggle runs rampant. The haves, ensconced in the looming skyscraper called Fiddler’s Green, live the good life while the have nots struggle to exist on the mean streets below. A class struggle is in the making between these disparate factions as they ignore their real problem. Outside the safety of the barricade, the zombies roam the land looking for human flesh to eat. One of the survivors, Riley (Simon Baker), leads armed forays into the no man’s land looking for ever-dwindling supplies to sustain the survivors. As he observes one zombie acting, strangely, like a human, he realizes that there may be the rudiments of evolution taking place. If the undead can think and, more important, communicate with each other then mankind’s problems will take a quantum leap in magnitude. One of the undead, wearing mechanic overalls with the nametag “Big Daddy,” is the first to show signs of cognizant thought and the uber-zombie takes command of the legion of the dead. Their target? The Green. George Romero created a phenomenon with his original Night of the Living Dead” and creeped out generations with his grisly black and white film about zombies attacking humans to eat their flesh in an allegory on racism. His next, “Dawn of the Dead” was a treatise on the mall mentality in America. His third zombie flick, Day of the Dead,” pitted the scientific community against the military in a reversal of Cold War mentality. Neither of the latter two films even came close to the horror Romero first introduced in ‘68. With “Land of the Dead” the zombie-meister still doesn’t approach “Night’s” shear horror, replacing honest to god scares with campy humor and copious gore. To Romero’s credit, no one else, either, has come close to what he accomplished almost four decades ago. In place of the scares, the heavily armed humans use the world’s leftover weaponry to gun down as many of the undead as possible. This is a shoot ‘em up that holds more akin to John Carpenter’s “Escape from New York” than it does to Romero’s own classic. Land of the Dead” is well cast with Simon Baker as the strong, honest and forthright Riley. With his disfigured and a little slow sidekick, Charlie (Robert Joy), the pair reminds me, strongly, of Harry (Humphrey Bogart) and Eddie (Walter Brennan) in Howard Hawk’s “To Have and Have Not (1944).” And, I mean this as a compliment. John Leguizamo plays a good foil to Riley as the tough, ambitious, social-climbing Cholo, whose plan is to gain access to the rich upper class of the Green. Dennis Hopper, as the greedy boss Kaufman, chews on the scenery with vigor and delivers lines like, “Zombies, man. They creep me out,” with humorous ease. The sturdy supporting cast fills in the blanks with a professional air. Eugene Clark, as the alpha zombie, Big Daddy, gives the character personality even though limited to grunts and growls. He makes the thinking zombie man’s worst nightmare. Only Asia Argento, as tough babe Slack, seems a bit out of place. Techs are solid with the zombie assault vehicle, Dead Reckoning, as the films biggest high tech moment. The copious gunplay is done in bombastic fashion as the humans blast away at the mass of zombies with impunity – until Big Daddy figures out how to use a gun. Then, all bets are off. The filmmakers don’t take themselves seriously and bring the rousing survival actioner to life with funny, dark humor. George A. Romero’s Land of the Dead” should to have a big draw and is the best of his trio following “Night of the Living Dead.” The gore and gross out factors are high but that won’t stop the zombie fans from flocking to it like, well, zombies.