George A. Romero's Diary of the Dead 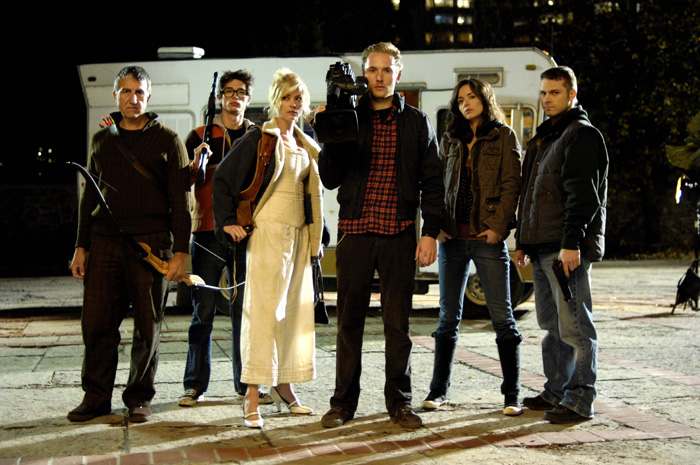 Jason Creed (Joshua Close, "The Exorcism of Emily Rose") always wanted to be a documentary filmmaker but the University of Pittsburgh senior chooses horror for his thesis film. During a night shoot on his mummy flick, he and his friends hear radio reports of the dead coming back to life and soon Jason's fiction film turns into the real documentary horror "Diary of the Dead."

One might think that another zombie movie from writer/director George A. Romero would be superfluous, a rehash of the many he has made since 1968's seminal "Night of the Living Dead," but one would be wrong. After partnering with Universal for 2005's "Land of the Dead," Romero returns to his indie roots for the first time in two decades with his trademark social commentary turning towards such recent events as Hurricane Katrina and the youtube generation while resisting the stylistic 'recovered tape' device of "Blair Witch" and "Cloverfield." Jason's girlfriend, Debra (Michelle Morgan, TV's "Heartland"), tells us that they first discovered the truth by viewing uploaded video from a Channel 10 news camera, unedited footage which showed the victims of a murder suicide attacking the EMTs from the gurneys their corpses were being rolled out on. The Government and the media had been attempting to control panic by filtering the message until the public started spreading the word with their own experiences. Jason takes a polished approach, editing the doc he will upload as "The Death of Death." After poking fun at horror conventions (women running lose their shoes and fall down) and himself (the soused literary professor on set notes the 'underlying social satire' of Jason's mummy film), Romero breaks up his film crew and puts them on the road. Rich kid Ridley (Philip Riccio), Jason's mummy, offers a lift to his folks' estate which Francine (Megan Park, "Charlie Bartlett") takes him up on. The rest of the cast - heroine Tracy (Amy Ciupak Lalonde) - and crew - Jason himself, Gordo (Chris Violette, TV's "Power Rangers S.P.D."), Tony (Shawn Roberts, "Land of the Dead"), Eliot (Joe Dinicol, "Weirdsville," resembling James Franco in the Spider-Man flicks) and Mary (Tatiana Maslany, "The Messengers") - board Mary's Winnebago along with Professor Maxwell (Scott Wentworth, "The Ice Storm") with first stop the University of Pittsburgh to pick up Deborah. After finding that spot eerily isolated, they set off for individual homes and have their first encounter with the living dead when a burned up Sheriff approaches from a wreck. Mary mows down three more undead, but her guilt over perhaps killing three human beings leads her to attempted suicide with the gun no one knew she had. Now the group has a dying friend to take to the perfect house of death - a hospital. Before the journey ends at Ridley's manse, the group will stop at the barn of a deaf Amish farmer (Romero's slick substitution for the days of no cell phones), clash with a militant Black group in its well stocked warehouse and be robbed by the National Guard (a neat double pronged response to Katrina). Throughout "Diary of the Dead," Romero equates the camera with a weapon and questions the human need to document disaster. We view the filmmaking process as a second camera is brought in (found at the hospital, it offers blackly humorous footage of a birthday clown gone bad in more ways than one) and footage from other sources like security cameras make the cut on any laptop Jason can borrow when he's not relying on the age old in camera edit. There is no need for Tracy to tell us that Jason is repeating that scene they were shooting in the woods when he records her being chased by a real live threat, but Romero lets us note that Jason is destroyed by his own creation, just like Frankenstein, on our own. As for the scares, they're there as is some ingenious gore (a nurse felled by defibrillator paddles to the head, a zombie's brain eaten before our eyes by the acid from a jar cracked over its skull). A family found not home takes on feelings of dread when their car is found in the garage and a friend driven to the edge shows where he's 'buried' the recently dead creating an indoor swimming pool of ghouls. The lone fault of "Diary of the Dead" is that it feels a bit padded, a lean 80-85 minute film trying to claw out of its 95 minute running time - a quicker pace would have raced the heart more. But Romero ends his film with an updated twist on the ending of some earlier ones and while the new one couldn't possibly have the effect of his first, it's modern viewpoint from a master of the genre.