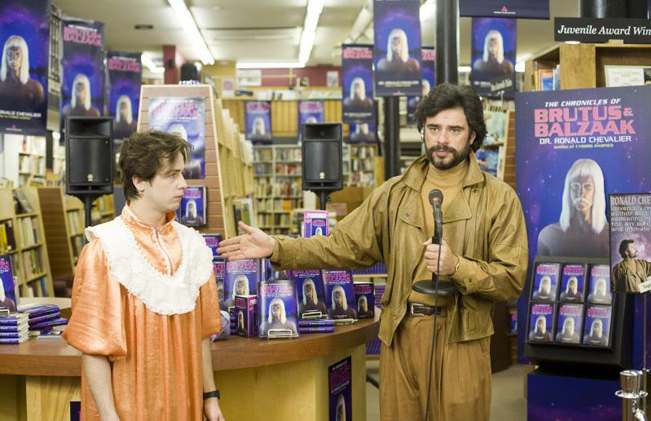 Benjamin Purvis (Michael Angarano) is a budding science fiction writer invited to the prestigious Cletus Fest – the best writers’ camp in the state of Arizona. Dr. Ronald Chevalier (Jermaine Clement) is the keynote speaker at the event and one of the judges who will be rating the attendees' works for the grand prize, the publishing of a 1000 book printing for distribution across the country. However, the good doctor is having career troubles of his own and decides to steal Benjamin’s manuscript, “Yeast Lords,” and submit it as his own. This begins a battle for justice and artistic integrity in “Gentlemen Broncos.”

"Gentlemen Broncos" proves that the Hesses owe a great debt to their "Napoleon Dynamite" star Jon Heder (used here briefly in juvenile fantasy sequences). In their third film, even with a cast including "Snow Angels'" Michael Angarano, Mike White and "Flight of the Conchords'" Jermaine Clement, they flatline. Bodily fluids, both human and animal, pass as humor. The script is condescending to its characters to the point that poor Jennifer Coolidge should file abuse charges. Only Jermaine Clement musters any kind of laughs - his puffed up sci-fi writer is a hoot giving a seminar on how to name characters. If "Gentlemen Broncos" is meant as homage to sci-fi, the Hesses better stay away from fan conventions.

I guess the feature film debut of the comic paper golden boy, I mean cat, Garfield, was inevitable. The only question I have is: why did it take so long? Not that I’m a particular fan of Garfield but it seems that the popularity of the comic strip would make it ideal fodder for kids’ entertainment. What we get, from director Peter Hewitt (“The Borrowers”), is a straightforward adaptation of Jon Davis’s popular feline character’s antics that combines pretty slick CGI with live action. Garfield (voice of Bill Murray) is living the life of Reilly as he takes care of his owner, Jon (Breckin Meyer), making sure that his human keep a ready stockpile of Garfield’s favorite food, lasagna, on hand. When Jon takes his pet to the vets yet again, Garfield figures out why when he sees his master get all ga-ga over pretty animal doctor, Liz (Jennifer Love Hewitt). Shy Jon is about to ask Liz on a date when she asks him to do something for her – adopt a perky little pup named Odie. Of course, Jon can’t resist those big brown eyes (Liz’s, not Odie’s) and takes the little dog home – much to Garfield’s chagrin. Suddenly, the self-centered cat not only must share his home, he must also vie for the affection and attention of Jon. And, cute little Odie seems to have the upper paw in the household. Grudgingly, Garfield’s resistance to Odie diminishes, especially when he learns that the puppy can dance! Jon and Liz take Odie on their first date to a local dog show and Garfield clandestinely tags along. Of course, when the feline lands among a whole bunch of canines, things get dicey. The dogs take chase after Garfield and the chaos nearly ruins the show – until Odie leaps to center stage when the music starts. His amazing performance is seen by Happy Chapman (Stephen Tobolowski), a low rent variety show entertainer on regional cable who sees Odie as his ticket to the big time. Jon, as expected, turns down Happy’s offer to buy Odie. Garfield is upset by all the attention Odie gets and, when a minor mishap caused by the G-cat wreaks major destruction on Jon’s home, he is in the doghouse, so to speak, and Odie becomes the number one pet. Garfield dupes the pup out of the house one night and the little dog runs away. He is taken in by a kind old lady who puts up “puppy found” posters around town. Meanwhile, Jon does the same thing, offering a reward for Odie’s safe return. Fortune smiles on Happy Chapman, who spots the old lady’s flyers and convinces her that he is Odie’s rightful owner. Once the malicious entertainer has the dancing puppy, he hatches a nefarious scheme to use a high voltage shock collar on the little dog to make him perform at will. Garfield, guilty over Odie’s disappearance, sets off on his own to find the missing puppy. It becomes a race against the clock as our feline hero must overcome enormous odds to save Odie before Chapman can spirit him off to New York on the Amsterdam Express train. Garfield must use every bit of his wits (and a helping of lasagna) to save the day. “Garfield: the Movie” will do well with younger audiences as the sassy cat amply displays his irreverence for any and all things that get in the way of his day-to-day pleasures. The CGI effects and the well-chosen voice of Bill Murray give full dimension to Garfield and should prove a popular diversion for the kids. There is too much of the cartoon strip, with simplistically drawn human characters, to have much appeal for the adult viewers. There are also too few jokes afforded to the adults that would make this more appealing as family fare. This is, of course, Garfield’s movie so don’t expect much from the human player. Breckin Meyer and Jennifer Love Hewitt are suitable as Jon and Liz, but the humans just play second banana to the CGI star. Stephen Tobolowsky is more a not-very-nice-man than a bad guy, except for the out of place torturing of poor Odie. Overshadowing the human players are the computer enhanced critters that come to Garfield’s aid. Nick Cannon gives voice to Louis, a little brown field mouse and Garfield’s friend who comes to the cat’s aid when most needed. Alan Cummings provides stiff upper lip dignity to Persnickety, the performing cat that Happy unceremoniously sends to the pound when Odie comes on the scene. Brad Garret, Debra Messing and others give good voice to the animal players in “Garfield.” Odie is a cute little dog, too. The kids will be there to see Garfield and the special F/X team, led by Alan E. Lorimer, do a mostly seamless job in integrating CGI and live action together. Only at one point, when one of the pound workers picks up Garfield, does the effect fail to convince. Otherwise, the computer-generated feline looks good. More adult oriented humor would have helped broaden the appeal of “Garfield: the Movie” beyond its youthful target audience. Parents will be marking the film’s run time instead of being entertained, though. “Garfield” is being released with a short cartoon featuring Scrat, the saber-toothed squirrel from “Ice Age,” called “Gone Nutty” that is an entertaining diversion an homage to the little critter’s acorns.