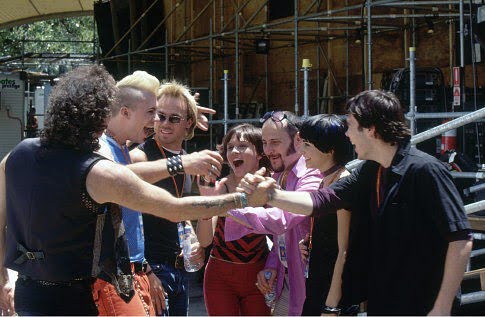 Proyas, who cowrote with Dave Warner ("Cut") & Michael Udesky, has made a film that resembles "Trainspotting" if it were sweet instead of edgy. Unfortunately, his third feature seems more like a first effort, with style borrowed from filmmakers like Guy Ritchie instead of building on his own formidable talent and a story that's all too familiar. Still, "Garage Days" is a likeable enough little movie for a viewer with a yen for 1980's music. The film begins by announcing the band members via multi-angled freeze frames a la "Lock Stock and Two Smoking Barrels." In addition to Freddy and Joe are Tanya Pia Miranda, "Queen of the Damned"), the bass player, and Lucy (Chris Sadrinna) the pharmaceutical supplying drummer. Buddy Bruno (Russell Dykstra, "Lantana") is the group's manager until he books them into the wrong pub for their first gig. Kevin Andy Anderson, "Ruby in Paradise"), an aging rocker who lives in a flat below Joe's, is an advisor of sorts. Freddy's luck looks up when the wallet he finds turns out to below to the manager of Australia's biggest band Sprimp. Shad Kern (Marton Csokas, "XxX"), who Freddy also catches canoodling with Scarlet (Holly Brisley, "Scooby-Doo"), Sprimp's lead singer's chick, agrees to listen to the fledgling group at their next gig. Hijinx follow as the members try to raise $1,200 to rent The Palace, their local music hangout, to show off their stuff. Meanwhile, Freddy and Kate experience an earth-moving kiss, but complications ensue when she discovers she's pregnant with Joe's baby. Joe, who has been cheating on Kate with Angie (Yvette Duncan, "Praise"), an intense Goth girl, decides to change his ways and begins carting a cantaloupe about in preparation for fatherhood. Proyas engages many retro devices, none original, such as the band members preparing for their first gig in separate grid panes a la The Brady Bunch. Two sequences, "Fun with Drugs" titled Parts 1 and 2, look like a bit from "The Monkees" if they had been on poppers and a fantasy sequence from "Beetlejuice". The film's most misguided scene features Shad being serviced beneath a table while Bruno mistakes his sex cries for a demand for a demo tape. The film's most unexpected bit involves the animation of "Mellie," Joe's cantaloupe, crying 'Papa!' as it hurtles towards an oncoming car's windshield. The soundtrack numbers, which include Tom Jones, Bowie's "Kooks," "The Look of Love" and two early Cure numbers, are all chosen literally, with lyrics obviously matched to screen action. The film's climax, filmed at Sydney's Homebake festival, is truly in the punk spirit, but it goes downhill to conclude with an uninspired 'where are they now' flashforward. Proyas is most successful with his lively cast, all of whom bring elements to "Garage Days" that make it an enjoyable watch. Kick Gurry is sweetly enthusiastic about both his band and his best friend's girl. Gurry and Stange have couples chemistry - their two lip locks feel like the real deal. A repeated shot of Gurry addressing Stange from his crowded junk heap's rear view mirror captures the look of love. Stiller has a tough job, as the character of Joe is tasked with a slow unravel that's given no background. His performance is OK but he leaves the weakest impression. Miranda gives Tan the requisite tough veneer of the only female band member and radiates a delightful glee when she discovers a hidden attraction to Lucy, who is made a likeable lummox by Sadrinna. Dykstra is a big plus as the hopelessly clueless but indomitable promoter. Anderson is a sweetly amusing addition, but his resemblance to Billy Connolly in "Still Crazy" adds the ghost of yet another film to "Garage Day's" burden. The film's marketing also does it a strange disservice by revealing the band's fate. "Garage Days" is a pleasant enough piffle, but a major disappointment as a followup to "The Crow" and "Dark City."