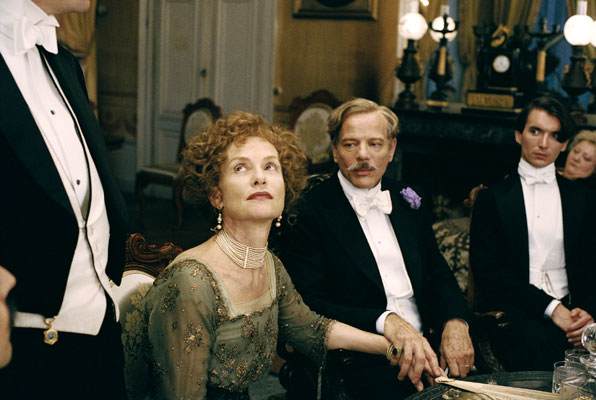 In turn of the century Paris, Jean Hervey (Pascal Greggory, "La Vie promise, "Son frère") is a man of means whose Thursday night soirees are the choice of many of the chic set. He believes he is living a charmed and happy life until he comes home one afternoon to find a farewell letter from his unfaithful wife, "Gabrielle."

Director Patrice Chéreau ("Intimacy," "Son frère"), who with cowriter Anne-Louise Trividic ("Intimacy," "Son frère") has adapted the Joseph Conrad novel "The Return," dissects a marriage in two parts, first presenting it from the contented eyes of Jean before thrusting it into a dark and mysterious place when Gabrielle (Isabelle Huppert, "La Vie promise," "I Heart Huckabees") unexpectedly returns home soon after her husband has read her letter. Chéreau opens with a sea of bowler hats and workers' caps on a train platform. Hervey is picked from the bunch as he reflects on his happy life, although he notes that his wife doesn't get much chance to 'play' her intellect. This reverie is filmed in black and white, a device used for interior reflection (note that although the scene is in color and two characters are in conversation, the self searching which takes place between Gabrielle and her maid Yvonne takes place within a black and white bathroom). A beautifully set table is displayed in glorious color, then peopled with dinner guests enchanted by Gabrielle's wit (she certainly can and does play that intellect), tweaking her husband's newspaper editor for containing some many emotions in one body. A guest proffers Rimbaud's reflection that no one can really know another, but Gabrielle declares she doesn't need to, she only needs her husband's companionship. Another reverie from Jean has him recalling meeting his wife, declaring her to be his most prized 'possession' (his words accompanied by a shot of the white marble statues in their foyer), but then his reverie is shattered. He spies the letter and begins to approach it. The camera zooms in on it, then again, then cuts away for a third approach. It's words are magnified over the screen. Gabrielle has left him for another man. But is Jean the innocent victim here? Gabrielle returns, downcast, saying she has made a mistake. Jean vents his anger, then offers forgiveness, which she responds to with laughter. Their struggle continues all evening, through a late dinner, and it is as if they are fighting over the one shared life force between them. He speaks of her veins, her paleness, how he loves the blush on her neck but hates the color tears bring to her face. She talks about how she wanted 'to flow into him like blood' when revealing her first sexual tryst with her lover, the editor Jean feels is 'oily and vengeful.' He barely touches dinner, gesturing for the servants to clear things away while Gabrielle clutches her plate, then continues with hearty appetite. Their ugly confrontation plays out in front of servants and continues to be public when the following evening, a Thursday, finds their house once more filled with guests. A grandly morbid piano recital (by opera singer Raina Kabaivanska) is an appropriate piece of entertainment, as surely must be the marital discord on display for all to see. Chéreau's period chamber drama is engrossing throughout and an interesting accompaniment to his modern day "Intimacy." That film, with its explicit sexual scenes, focused on the affair and kept the dialogue between the couples to a minimum (there was more actual talk between the two men). "Gabrielle," although surprisingly sexual for a period piece, puts the dialogue in the forefront, gradually twisting our sympathies as the characters reveal themselves. Both films feature edgy music, with Fabio Vacchi providing "Gabrielle" an experimental modern classical score. And, in the end, both films suffer slightly from their inability to truly get into the minds of their female protagonists. The great Huppert, though, whose final move is mysterious, if effective, is a joy to watch here and she and Greggory ably define one of those surface marriages that suit individual needs if not a couple's. Claudia Coli is a terrific new presence as Gabrielle's maid Yvonne and the two women's work together provides the film's best scene.

I have been anticipating “Fury” since I first heard of the “Untitled Brad Pitt War Movie” months ago. And, for a huge fan of war movies like me, this movie hits the spot. One of the reasons for this is the scrupulous accuracy of the production, from equipment, uniforms and weapons to battle tactics, like the American Sherman tanks versus the German Tiger. Add Brad Pitt as the heroic leader and we get a complete package. “Fury” reminds me of the best men-in-tanks-at-war film, the classic “Sahara (1943)” starring Humphrey Bogart. That great film (one of my all time favorite war movies), shot as WWII raged in Africa, was a parable designed to spark patriotic fever against the Nazi juggernaut – and it did. Writer/director David Ayer’s modern take on the Great War is more cynical than patriotic with its Band of Brothers sensibilities – the only ones that matter in war are those next to you in the fight. The sergeant and his men are called upon to take on a Nazi force that is ten times their meager number. He is joined by his seasoned crew – ‘Bible’ Swan (Shia LaBeouf), ‘Gordo’ Garcia (Michael Pena) and ‘Coon-ass’ Travis – and a rookie assistant driver, Norman Ellison (Logan Lerman), drafted a scant two months before and not trained to drive a tank. Norman is a fish out of water and his new comrades, used to losing their closes friends in battle, do not make life easy for him. Add to this crew dynamic the horrors of war and the heat of battle and it makes for one hell of a war flick. “Fury” is not a family movie, date flick or one for the squeamish. It is a first-class WWII movie that should attract action fans, Brad Pitt fans (at least the guys) and people like me – history and war fanatics who will drool over the film’s accuracy to details and events of the day. One problem I have, though, is a sequence around the mid point where Wardaddy and Norman share an interlude with two young German that takes you out of the moment. That said, the rest of the film had me at ”hello.”