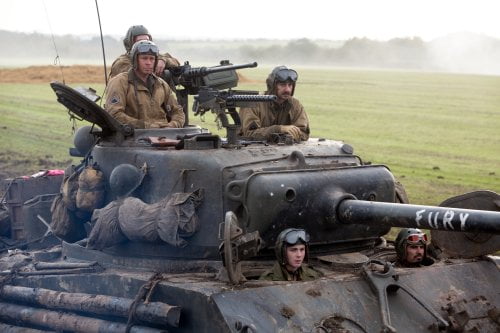 Sgt. Don “Wardaddy” Collier and his battle-hardened tank crew have been on the front lines of World War II since North Africa. Now, it is April 1945 and the German army is being pushed back to its borders and beyond. But, the Nazis have not given up yet and Sgt. Collier and his men are called upon to go behind enemy lines and stop a German attack against all odds in “Fury.”

One month before the end of WWII in the European theater, Norman Ellison (Logan Lerman, "Percy Jackson: Sea of Monsters," "Noah"), a young private trained to type 60 wpm, is ordered to replace the assistant driver of a 2nd Armored Division Sherman tank crew that's been together since the Northern Africa campaign. At first aghast by the youth and inexperience of his new guy, tank commander Sergeant Don 'Wardaddy' Collier (Brad Pitt) is insistent that the kid learn quickly that he must kill Nazis as a member of the crew of "Fury." Writer/director David Ayer ("End of Watch") has made an inarguably authentic account of WWII tank battle during the last gasp of Nazi resistance when German soldiers were often pre-teen children, a nice parallel to Norman's innocence. But the event he leads up to, a heroic last ditch attempt to fell hundreds of SS by one lone tank crew, isn't true and the inter-personal dynamics of the four men who've been fighting together across countries are weird at best. Pitt's Wardaddy is an intriguing character, a true leader whose German language skills and hatred of the SS imply a back story we never get to hear. Norman's 'baptized' by being ordered to clean out the interior of Fury, still awash with the blood and guts of former assistant driver Red. The crew's sent by Captain Waggoner (Jason Isaacs, "Harry Potter's" Lucius Malfoy) to head out behind enemy lines to liberate soldiers pinned down by enemy forces. Along the way, Norman's hesitance to shoot a young German ambusher costs the life of another crew's man and Wardaddy uses tough tactics to force the kid's first kill. But they're all sickened by the sight of German children hanging by the side of the road, labelled as cowards by Hitler's henchmen. When Fury arrives at its destination, enemy fire is targeted and mission accomplished. Tank crews take time to celebrate with local women and booze. But Wardaddy spies a woman in a window and pulls Norman aside to investigate. A shaken Irma (Anamaria Marinca, "4 Months, 3 Weeks and 2 Days") is trying to protect her beautiful young niece Emma (Alicia von Rittberg, "Barbara") from enemy soldiers, but Wardaddy sets the stage for domesticity, offering a half dozen eggs. Norman takes to the piano, earning Emma's admiration and the youngsters seek privacy. But when gunner Boyd 'Bible' Swan (Shia LaBeouf), loader Grady 'Coon-Ass' Travis (Jon Bernthal, AMC's 'The Walking Dead,' "Grudge Match") and driver Trini 'Gordo' Garcia (Michael Peña, "End of Watch") arrive, drunk, they're angered at their exclusion and the scene turns ugly, even surreal. This is where the film lost me. Sure the guys are drunk and resent Wardaddy's attentions to the newbie, but why does Wardaddy tolerate their behavior? One might surmise his kindness to these women springs from his own heritage (German people good, SS evil), yet he good-naturedly allows them to be terrorized. The men themselves never come into sharp focus, LaBeouf always praying but quick to the kill, Bernthal almost subhuman and very connected to his gunner, Peña, so great in Ayer's last film, surprisingly making the weakest impression of all as the hard drinking Mexican. One gets about as much character definition from Jim Parrack (HBO's 'True Blood'), Brad Henke ("Pacific Rim") and Kevin Vance ("Sabotage") as Pitt's fellow tank commanders. Lerman is fine as the innocent who becomes a man under the wing of Pitt's commander. The imagery in the film is harsh, not your grandfather's war film. The effects captured by cinematographer Roman Vasyanov ("End of Watch," "The East") can be haunting, the sight of a flattened soldier disappearing into the mud run over by tank tracks a picture I won't soon forget. Ayer forgoes the claustrophobic tank interior viewpoint used to great effect in "Lebanon," instead relating the closeness of the men themselves in close quarters, the sound of enemy fire clanging against the metal hull around them. "Fury" has some strong, visceral moments but the odd, ephemeral characterizations at its core cause the film to vanish in a fog of war. Grade:

I have been anticipating “Fury” since I first heard of the “Untitled Brad Pitt War Movie” months ago. And, for a huge fan of war movies like me, this movie hits the spot. One of the reasons for this is the scrupulous accuracy of the production, from equipment, uniforms and weapons to battle tactics, like the American Sherman tanks versus the German Tiger. Add Brad Pitt as the heroic leader and we get a complete package. “Fury” reminds me of the best men-in-tanks-at-war film, the classic “Sahara (1943)” starring Humphrey Bogart. That great film (one of my all time favorite war movies), shot as WWII raged in Africa, was a parable designed to spark patriotic fever against the Nazi juggernaut – and it did. Writer/director David Ayer’s modern take on the Great War is more cynical than patriotic with its Band of Brothers sensibilities – the only ones that matter in war are those next to you in the fight. The sergeant and his men are called upon to take on a Nazi force that is ten times their meager number. He is joined by his seasoned crew – ‘Bible’ Swan (Shia LaBeouf), ‘Gordo’ Garcia (Michael Pena) and ‘Coon-ass’ Travis – and a rookie assistant driver, Norman Ellison (Logan Lerman), drafted a scant two months before and not trained to drive a tank. Norman is a fish out of water and his new comrades, used to losing their closes friends in battle, do not make life easy for him. Add to this crew dynamic the horrors of war and the heat of battle and it makes for one hell of a war flick. “Fury” is not a family movie, date flick or one for the squeamish. It is a first-class WWII movie that should attract action fans, Brad Pitt fans (at least the guys) and people like me – history and war fanatics who will drool over the film’s accuracy to details and events of the day. One problem I have, though, is a sequence around the mid point where Wardaddy and Norman share an interlude with two young German that takes you out of the moment. That said, the rest of the film had me at ”hello.”