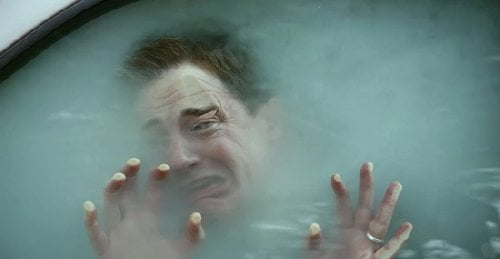 When real estate developer Dan Sanders (Brendan Fraser) tries to build a new housing subdivision in the pristine woods of Oregon, the critters who live there decide to take a stand and Sanders is in for a heaping serving of "Furry Vengeance."

Director Roger Kumble was responsible for one of the worst films I've reviewed in the past couple of decades, "The Sweetest Thing," but he has outdone himself here. The only reason "Furry Vengeance" doesn't rate an 'F' is because some hard working animal trainer clearly got some interesting results. This godawful excuse for family entertainment could have delivered a good eco message to kids, but instead it contents itself with rolling its lead around in an upended porto-potty. We learn what Dan is in for in a prologue in which his crass predecessor, Riggs, is targeted by a raccoon for tossing his lit cigar out his car's window. A bird of prey retrieves said object and the raccoon signals a weasel on a hilltop to set off a Rube Goldberg contraption which sends a bolder to intercept Riggs. He quits and in steps Dan, who has agreed to live in a rural model home for a year, transplanting his citified wife Tammy (Brooke Shields, looking like she's spent too much time in a tanning booth) and unappreciative teen Tyler (Matt Prokop). The raccoon gets a report when Dan yells at a squirrel for eating his blueberries, but when the raccoon overhears Dan give his foreman Frank (Ricky Garcia) the OK to blast a beaver dam rather than overrun their budget by 50K, it's war. Dan is kept awake by a pecking crow, blasted by skunks, has his wardrobe stolen, is attacked by bees, has his SUV coon-jacked, etc. Tammy think his tales of animal torture are lunacy and his boss, Neal Lyman (Ken Jeong, "The Hangover"), isn't amused by his antics either. Meanwhile Tyler's met a local girl, Amber (Skyler Samuels, 2009's "The Stepfather"), who hates what his dad stands for and Tammy is aghast at what Dan's boss's sponsorship is turning her Forest Festival into. About the only thing of value in "Furry Vengeance" is the warning to check under the hood of so-called 'green' corporations as many of them are anything but. Still, the film, written by Michael Carnes & Josh Gilbert ("Mr. Woodcock"), is just a series of puerile visual gags punctuated by obvious eco preaching and painful left field attempts at humor (every appearance by Toby Huss (TV's "Reno 911!") as Wilson, Lyman's security guy). Alice Drummond ("Doubt") inhabits the dubious character Mrs. Martin, a schoolteaching colleague of Tammy's, playing Alzheimer's for laughs. Brendan Fraser, who I hope put on weight for this role, has reduced himself to a pudgy human cartoon. While he's done that before, without the gut, in "George of the Jungle" and "Dudley Do-Right," to good effect, here it's just painful to watch, in service of poor material. Ken Jeong is squandering the good will he built up with his hilarious role in "The Hangover" by accepting everything, no matter how low rent, that's tossed his way. Here he uses some Asiatic screeching and a scowl as funny, although notably the character talks to his mother on the phone in English(!). "The Office's" Angela Kinsey is stranded as his assistant Felder. There is some interesting work by the animals, who are given chittering effects 'voices' and have their faces occasionally tweaked with CGI (usually just widening of the eyes). The filmmakers don't even offer relief by ending their movie, as the closing credits are accompanied by a music video for an "Insane in the Membrane" cover in which Furry TV treats us to Brendan and Brooke recreating a Robert Palmer video, a clip from "Risky Business" and a "Blue Lagoon" parody, none of which have anything to do with anything.