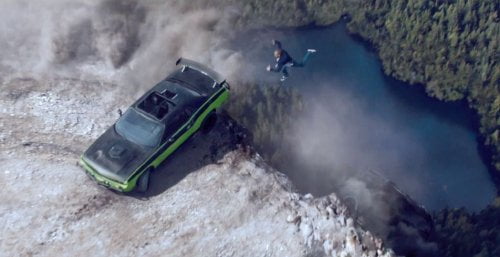 As Dom Torreto's (Vin Diesel) crew tries to adjust to normal life after finally finding themselves on the right side of the law, Owen Shaw's older brother Deckard (Jason Statham) has already begun to avenge his death, killing Han (Sung Kang) in Tokyo and sending Hobbs (Dwyane 'The Rock' Johnson) to the hospital. After he blows up Torreto's house, Dom's approached by a mysterious government agent calling himself Mr. Nobody (Kurt Russell) who offers Dom the use of an unprecedented tracking device to find Deckard. The catch? Dom's team has to mount an improbable mission to rescue the device's designer Ramsey (Nathalie Emmanuel, HBO's 'Game of Thrones') from a terrorist (Djimon Hounsou) in "Furious 7."

"Saw" director James Wan takes the reins for the first time in the franchise and churns out a preposterous cartoon where Dom's crew can all drive off a plane and land with parachutes on a mountain top road with no damage or injuries, where a tracking device called God's Eye that 'could have found Osama Bin Laden anywhere in the world in a couple of hours' can find the villain in an isolated location but not register the armed men around him who will ambush our heroes, where said device is mailed to a 'friend' for safekeeping only to be sold to a rich prince for no other reason than to set up the next CGI-heavy stunt, where we're supposed to believe the 5'10" Jason Statham could best The Rock (6'4") by sheer brute force, where Kurt Russell is a twinkly magic black ops 'ghost' and where Letty can angle the rear of her car over a cliff just in time for Brian - who she couldn't possibly know was there - to grab hold of its spoiler. This movie has no desire to engage the intellect, merely assuming it's nonexistent - I couldn't wait for it to end. The series doesn't just need a new director to shake things up, but a new screenwriter, Chris Morgan having been on board since "The Fast and the Furious: Tokyo Drift." While the last few films in the franchise have also suffered from underwritten plots supporting big action stunts, we always had the romantic, dramatic and comedic interplay among the characters to enjoy. This time, even that feels flat, Tyrese Gibson's comic shenanigans now maladroit line readings, Letty's amnesia played out like an afternoon soap. When Dom starts to go on about family, it's like one of those phone calls you get from your mother droning on with the same old complaints that makes you want to put the phone down and do something else until the monologue is over. Even the injection of fresh blood does little, Emmanuel clearly intended to create more friction between Roman and Tej in future entries but doing little but looking fetching while tapping away on a keyboard to earn her keep. Russell is at least fun whenever he appears, even if his character feels dropped in out of an 80's Bond film. And therein lies the rub. In order to extend the story of these street racing daredevils, the studio has allowed its filmmakers to stray too far from the story's roots. It's time to come back to earth, which this film only does in its memorial coda to Paul Walker, a fine sendoff which doesn't take the road most traveled. Grade: