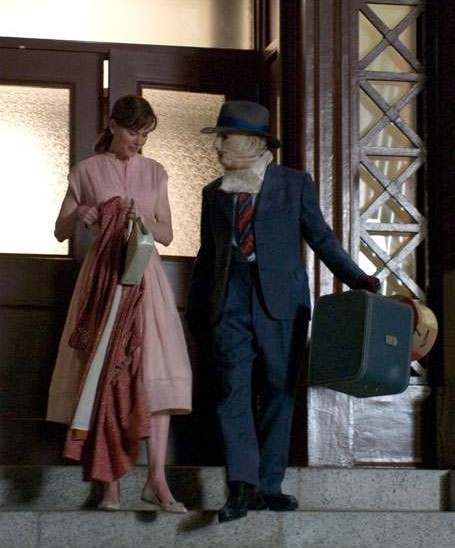 In 1958, a New York City housewife, Diane Arbus (Nicole Kidman, "Bewitched"), began to explore her artistic side, becoming one of America's most famous and distinctive photographers. Arbus was known for her fringe subjects, from eerie identical twins to real life giants, and so the "Secretary" team of director Steven Shainberg and screenwriter Erin Cressida Wilson use a freaky fictional character, Lionel Sweeney (Robert Downey Jr., "Kiss Kiss Bang Bang"), as both a symbol of the artist's id and inspiration for her life's work in "Fur: An Imaginary Portrait of Diane Arbus."

"Fur" is certainly an odd film and some of its metaphors, most notably an overused "Alice in Wonderland" theme, are a bit heavy handed, but nonetheless it succeeds in presenting the birth of an artist and emotionally conveying familial friction and a theoretical state of mind that would eventually lead to suicide. Nicole Kidman and Robert Downey Jr. are wonderful in their roles and have great chemistry - their late act lovemaking scene and the most unusual foreplay that precedes it is the most tender and erotic of the year. A brief prologue introduces Arbus as the artist she had already become, scribbling notes (slaughterhouses, albinos, insane asylums) on a rural bus. She gets off and walks down a path to Camp Venus, whose first inhabitant is revealed to be a nude man mowing the lawn. Diane has come to photograph nudists. The Diane we next see is the pre-photography Arbus, a nervous rabbit of a woman, beautifully styled but crushed beneath the weight of her mother's (Jane Alexander, "Sunshine State," "The Ring") disapproval. Diane's husband Allan (Ty Burrell, "Friends with Money") runs a photography studio in their sprawling New York City apartment and Diane is his assistant. On the evening in question, they are preparing to host Diane's father's (Harris Yulin, "The Emperor's Club") showing of his new fur collection, a bit of business to help the younger couple. Taking a smoke break, Diane sees her new neighbor moving in, a man fitted out in a hood something like the elephant man, and he returns her gaze. She's fascinated, but later dad's customers are captured in closeup, looking like Fellini circus freaks. To Diane, it is the normal that is scary, and she has a small breakdown trying to address the crowd ('What now?' her parents whisper in exasperation). A few days later, Diane removes gobs of hair plugging her bathroom plumbing and goes upstairs to address the issue - surely Lionel Sweeney must have a dog. It will turn out to be the most significant journey of her life as Lionel inspires her to pick up the unused Rolleflex her husband gave her years before. Lionel, a wig maker, is afflicted with a rare condition that causes hair to grow all over his body and his former exploitation in the carny world has left him with some interesting associates. Diane joyfully tumbles into this world, beginning work on a collection. Her supportive husband begins to fret, and, after meeting the unmasked Lionel, grows a beard. Younger daughter Grace (Emmy Clarke) delights in mom's new friends, but elder daughter Sophie (Genevieve McCarthy) reacts badly, eventually betraying her. "Fur" is an intricately designed film both in its scripting ('It's all too predictable,' Diane observes of the smiling housewives advertisement her husband has arranged) and visuals (access to Lionel's apartment involves a spiral iron staircase down a passageway at the head of a more conventional one and a trap door is found leading from his living room into the Arbus studio). Rich period detail is intermixed with fantastical ideas from Wonderland's teapot to Betty Page imagery to Cocteau's Beast. The peephole in Lionel's door reflects Diane's camera, the intricate pattern of swirled rope that adorns his mask hints at the S&M to come and Diane's childhood dream and Lionel's eventual fate suggest her own. Production design, art direction, costume and makeup are all top notch. Kidman blooms in the role, a fragile housewife who morphs into a confident, if still emotionally conflicted, artist. Downey Jr. gives Lionel a quiet dignity leavened with warmth and a trace of cheek. He's the petri dish Arbus grows in and the two actors put across the strong attraction between their characters. Ty Burrell, the dark epitome of a 60's adman (the way he smokes in bed is of another era), neatly manages the line between encouragement and jealousy. Alexander is a gargoyle of a mom, suggestive of her daughter's eventual subjects. Although Patricia Bosworth's biography of the photographer was used as a jumping off point, "Fur: an Imaginary Tale of Diane Arbus" is no biopic and it requires a viewer willing to go with Shainberg's admittedly furry flow. It's a kinky fairy tale that uses a strange love affair as a metaphor for the artistic urge.