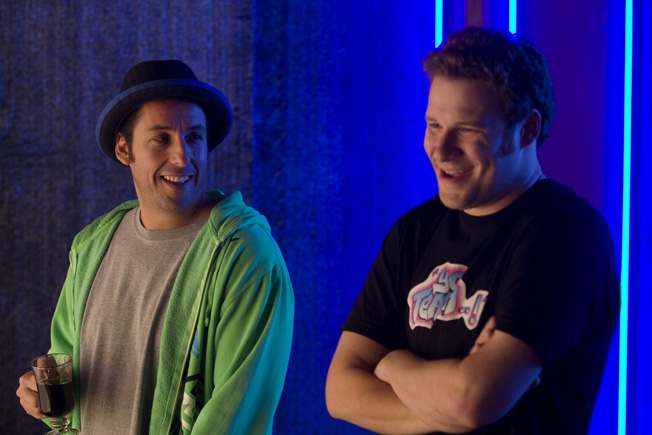 Ira Wright (Seth Rogen, "Knocked Up," "Observe and Report") is a deli clerk by day and struggling stand up comedian at L.A.'s Improvisation Comedy Club by night. He rooms with buddies Leo (Jonah Hill, "Superbad"), another aspiring comic, and Mark (Jason Schwartzman, "Rushmore," "The Darjeeling Limited"), who has been becoming obnoxious of late with his new found fame on a lousy network sitcom. Then Ira has the good fortune to cross paths with comedy star George Simmons (Adam Sandler, "You Don't Mess with the Zohan") when George is at his nadir and suddenly Ira finds himself in limos and private planes as Simmons's joke writer and personal assistant in "Funny People."

Writer/director Judd Apatow ("The 40-Year Old Virgin," "Knocked Up") dispenses with the comedy formula to go for something more universally human yet retains the yucks by setting his story within the upper and lower echelons of the Hollywood comedy circuit. Apatow draws on his own industry start (the film even begins with videotape he took of his then roommate Sandler making prank phone calls) to tell the tale of three roomies experiencing differing levels of success with the requisite fallout before bringing George Simmons, a man whose incredible success has left him bitter and alone, to the forefront. À la "Knocked Up," George's dire medical diagnosis allows Apatow to once again twit the medical profession and, once again, makes his set a family affair, with wife Leslie Mann ("Knocked Up," "17 Again") cast as Simmons's love interest and the mother of two children played by the couple's own (Maude and Iris Apatow, "Knocked Up"). It's a fairly typical story. Those on the bottom aspire to the top as those on the top wish for the good old days, but seeing as how Rogen and Hill are fairly recently famous and Sandler not, everyone is natural and their interplay fresh (in a running joke, Hill keeps reminding the much-slimmed-down Rogen that fat is funny). The wild card, Schwartzman, is a brilliant addition, his 'in between' status making him a natural for the most successful of the younger generation. Apatow weaves in more globally human elements with the romance resuscitated between Simmons and the woman, Laura (Mann), he drove away with women who came too easily as his star ascended. Under Ira's disapproving eye, George uses his illness to gain the now-married-with-two-kids Laura's sympathies. Laura uses the situation to bolster her confidence which has been eroding within the confines of a long-distance marriage to Australian huckster Clarke (Eric Bana, "Munich," "Star Trek"). Sandler, underrated in more dramatic roles in "Spanglish" and "Reign Over Me," gives another solid non-comedic performance as Simmons, a man created as a contradiction. He wants to connect, but builds barriers, targeting the easy women who come his way even after they cost him the love of his life, happily befriending struggling Ira yet keeping his status in his back pocket should his new friend displease him. In one scene, while giving 'grace' at Thanksgiving dinner in Ira's apartment to a motley collection of hopefuls, George describes himself as 'the old man' in the room and while it is strange to consider Sandler thus, the actor carries a weight, his eyes look a little dead. Rogen tones down the devilish aspect of his chirpy personality to bring an innocence to Ira that makes him an ideal foil for Sandler. Rogen, Hill and Schwartzman do a great job projecting the competitiveness within their friendship and Schwartzman is breezily schmarmy as well as oblivious to the utter awfulness of 'Yo, Teach!' one of those inexplicably greenlit series. Leslie Mann's career has gotten a huge boost with her husband's comedic prominence and she's OK, cute and believably maternal (a pivotal scene involves watch elder daughter Mabel perform "Cats" on video, and yes, Maude Apatow has an eerie talent). Her best scene is a massacre of the Australian accent when she tries to take Clarke down a couple of pegs, and perhaps the movie's biggest surprise is Bana who is utterly recognizable as that expansive guy's guy (is the 'Bana curse" over?). Aubrey Plaza of TV's "Parks and Recreation" is a fresh and offbeat face as Ira's love interest Daisy. In a small role as Ira's deli counter coworker, RZA ("Coffee and Cigarettes," "American Gangster") is a scream and Torsten Voges ("Deuce Bigalow: Male Gigolo") is a good sport as the butt of George and Ira's jokes as Dr. Lars. There are numerous celebrity cameos. Andy Dick and Sarah Silverman do their schtick, but Eminem turns the humor pitch black (and gets off a shot at Ray Romano to boot!). Aziz Ansari ("Observe and Report," TV's "Parks and Recreation") is the only cast member who fails to register as a real person. Apatow's film is almost 2.5 hours long and yet it doesn't feel it. The screenplay delivers like it's coming from experience combined with real behavioral truths. The humor in the stand up routines is actually pretty bad for the most part, and yet Apatow makes the humor organic, the fun in watching the "Funny People" who perform it being 'themselves' amongst themselves.