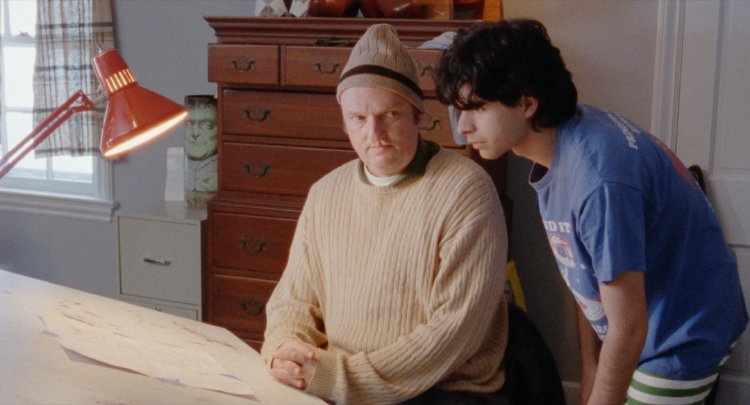 When his beloved high school art instructor Mr. Katano (Stephen Adly Guirgis) is killed right in front of him in a freak car accident, senior Robert (Daniel Zolghadri, "Eighth Grade") informs his upper middle class parents (Maria Dizzia and Josh Pais) he won’t be continuing school or going to college.  Instead he rents a dubious apartment in Trenton, NJ and gets a data job with his lawyer (Marcia Debonis’s Cheryl) where he is starstruck meeting former Image Comics color separator Wallace (Matthew Maher, "Gone Baby Gone") on his quest for a career in the “Funny Pages.”

Writer/director/co-editor Owen Kline (son of Kevin and Phoebe Cates) grew up working with the Safdie brothers on their short films and while they are an influence on his semi-autobiographical feature debut, his love of subject comes through loud and clear, the likes of Crumb, Ralph Bakshi and Harvey Pekar permeating the proceedings.

Kline kicks off with great economy, distilling Katano’s sway over his student before the opening credits roll.  The teacher shares a love of subversive comics with his student while also acting wildly inappropriately, stripping down to his socks and standing on his desk so Robert can sketch him.  When the teen has to leave, Katano follows him in his car, insisting he give a ride to the kid who keeps replying his walk is 5 minutes.  Moving slowly on the wrong side of the road, Katano is killed in a front end collision.  Robert only recognizes his loss, later getting arrested for breaking into the man’s office to safeguard his artwork.  It is a great introduction to what follows, a tale that could have leapt right off the pages Robert cherishes.

He acquires a beater of an Altima called ‘the cucaracha’ (which he is inordinately thrilled about) from his comic store boss in exchange for weekend overtime and drives to his new ‘home,’ a disgusting boarding arrangement with a creepy landlord, Barry (Michael Townsend Wright), who explains his bedroom will be shared with Steven (Cleveland Thomas Jr.).  (Noting one cannot see through the fish tank, Robert inquires if there is a fish in there.  ‘He was eaten by the other fish,’ replies Barry.  ‘Where’s that one?’ asks Robert.  ‘I don’t know’ is the unsettling answer.)  But it is Robert’s imbalanced friendship with bestie Miles (Miles Emanuel) and his near canonization of the disturbed Wallace, the latter culminating in a disastrous Christmas Day invite to his parents’ house, which forms the crux of the story.

Kline’s casting of veteran character actors and complete unknowns is inspired, Zolghadri committed to Robert’s pursuit in all matter of wrong with rebellious teenaged conviction.  Emanuel is the very picture of a pimply, long-haired nerd and exudes a good heart.  Louis Lasser even appears as an argumentative Rite Aid customer looking for a Percocet.  But the film’s slam dunk performance comes from Maher, whose broken failure of a man cannot withstand the pressures of Robert’s idolization – he’s a perpetual anxiety attack.

Cinematographer Sean Price Williams’ (“Good Time”) love of close-ups adds space invading discomfort while highlighting character and performance, his use of super 16mm adding to the DIY aesthetic.  The film’s score by the High Llamas’ Sean O’Hagan is appropriately off kilter, utilizing instruments from a Theremin to church bells while its soundtrack features oddities like The Nutty Squirrels’ ‘Uh Oh.’

“Funny Pages” doesn’t come to a conclusion so much as it trails off into the aftermath of chaos, but it is an authentic portrait of the coming-of-age of a lover of subversive art.  Owen Kline knows what of he speaks.