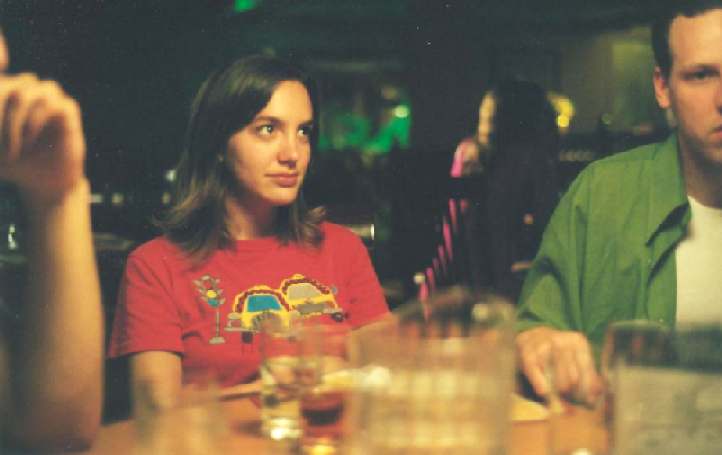 After being fired from her job, Marnie (Kate Dollenmayer) is drifting, trying to define her life. Her good friends Rachel (Jennifer L. Schaper) and Dave (Myles Paige) tell her that Alex (Christian Rudder) broke up with his girlfriend and Marnie admits to an attraction to him. Alex, though, is a bit of an oddball and Marnie finds her communications becoming increasingly funny-strange rather than "Funny Ha Ha."

In the best tradition of low budget, independent filmmaking, writer/director Andrew Bujalski corralled a bunch of friends and made himself a movie on the cheap. His slacker slice of life is so true and natural that anyone who's gone through their early twenties will recognize pieces of their own experience. This thoroughly engaging little movie takes unexpected paths with nary a false step and was 2004's worthy winner of the Independent Spirit's Someone to Watch award. Bujalski gets everything right, from the post-dorm living conditions of newly minted adults to their boozy parties. In fact, when we first meet Marnie she's slightly drunk, trying to get tattooed by a polite but sensibly dismissive artist. The next evening finds her drinking with Alex's sister Susan (Lissa Patton Rudder) who encourages her to let Alex know she's out there, but Alex nips that thought in the bud with a weird phone call accusing his sister of outlandish ideas. Off hand and not so off hand kisses with friends and strangers keep Marnie's mind spinning while Mitchell (Bujalski), an awkward guy she meets while temping who clearly has a major thing for her, hovers in the background. And all the while Alex says one thing and does another, continually sending mixed signals. "Funny Ha Ha" looks and sounds like the low budget film it is, but Matthias Grunsky's in-the-action photography is just right for making the audience feel like a fly on the wall. Audio problems are noticeable, but levels become more consistent as the film, which I'm guessing was shot sequentially, unspools. Bujalski's ear for dialogue is great, a continuous stream of friendly in-jokes and apologies for uncertain behavior. Perhaps his greatest achievement, though, is the level of acting he's attained from his entirely non-professional cast. Dollenmayer is immediately capable of carrying an entire picture and every last supporting player is like someone you knew in college. There seems to be absolutely no awareness of the camera among the actors who never come across as acting. Bujalski's one fashionable misstep is a too abruptly handled ending, but this is an extremely minor quibble. "Funny Ha Ha" may be a small movie, but it deserves a big audience. It's one of those rare, unrefined gems with minor faults and major merits.