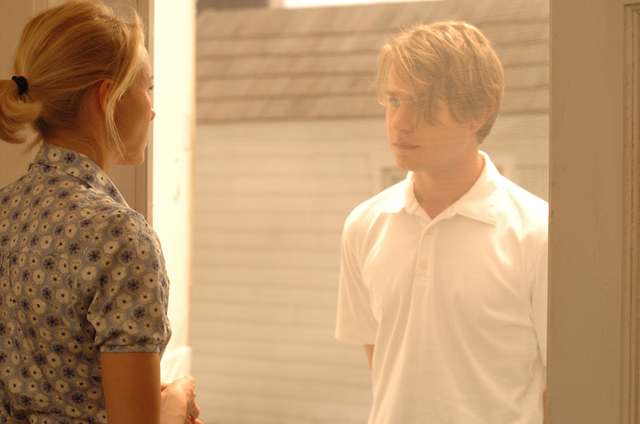 Writer/director Michael Haneke ("Caché") has remade his 1997 Austrian Cannes competitor shot for shot for the American audience he says his film was always aimed at. That statement should give one pause, as this intensely disturbing film is intended as an indictment of violence as entertainment (among other things), yet the American audience courted here is more than likely to perceive the film as a straight-ahead horror movie rather than a philosophical argument. Seeking the film's meaning is likely to give one a headache of contradictions. The film begins with an overhead shot of the family SUV trailing a sailboat along a two-lane road. It's unseen driver and front seat passenger, obviously a couple, are playing a game of 'guess the classical music piece.' Blood red block titles come up over the now seen passengers, including a young boy, Georgie (Devon Gearhart, "Bobby Jones: Stroke of Genius"), in the back seat with a a Golden Retriever. The music abruptly shifts to piercing and aggressive heavy metal. Our protagonists are being marked as victims from the get-go. This family vacations in a large, gated Colonial lakeside home. Ann wears the kind of simple looking cotton dress that costs hundreds of dollars. The kitchen is well equipped, its owner fretting that she has defrosted 'too much steak.' There is no reason not to think well of these people, but clearly their lifestyle would be envied by many. Inside the house, Georgie seems alarmed and tells his mom there is someone at the door. It turns out to be Peter. His white gloves are strikingly odd (the entire pure white getup and Nazi youth haircut immediately calls "A Clockwork Orange" to mind), yet go unmentioned (far later a more direct neighbor, Betsy (Siobhan Fallon Hogan, "Holes," "Dogville"), who pulls up at dock will ask Paul if he is cold). There is something provocative about this young man, especially when (off camera) he fumbles the 4 eggs he has just borrowed, then continues to hang around. Later Peter appears as well and becomes enraptured by the brand of golf clubs propped up in the hall and begs to be allowed to try one. Cut to dad and Georgie back at the sailboat alarmed at the sudden stop of their dog's barking (in fact, the absence of sound is significant in this film, which has little to no ambient noise). Haneke certainly keeps piling on a sense of dread. The certainty of the demise of the family pet is a slap in the face, kids and animals being sacrosanct from movie violence, and things, of course, only continue to go downhill. We are given several false starts of hope, escapes easily made always to backfire. Paul, who verbally torments his less intelligent cohort as well as torturing the family, begins to address the audience, courting our collusion while admitting we are probably on the other side. When asked the obvious 'Why's?' he presents several scenarios, then wipes each away. When presented with the first truly effective, 'heroic' act, Paul takes us out of the film in a very unique way to reestablish control - you weren't getting away that easily, were you? Although Haneke's 10 year later remake is identical to the first, the production is crisper and the cast more well known (Ulrich Mühe, the Stasi agent in "The Lives of Others" starred as Georg in the 1997 version). There will also be different interpretation of its events given a decade's history and the targeted audiences - 1997's killers could be viewed as Nietzsche worshipping anti-Bourgeois while 2008's look more like a terrorist threat. It should be noted that the perpetrators bring no weapons to their home invasions, instead turning their victims's own material wealth against them. Michael Pitt is terrific as the sadistic Paul, particularly adroit weaving in and out of the film's reality, and Brady Corbet projects a menacing slowness that invites frustration and violence. As in the first film, executive producer Watts gives Ann a core of strength amidst the indescribable while Roth makes George's emasculation almost noble. Young Devon Gearhart conveys fear realistically. So, if it is human to slow down at an accident scene, does that make it acceptable to admire Haneke's film? It certainly is a masterwork of manipulation and he plays out the worst of his violence off screen (undercutting his own intent, though, no?). Still, "Funny Games" is not for the faint-hearted. The filmmaker's objective may be maddeningly muddy, but his work is well crafted.

First time feature film writer/director Ryan Coogler does a remarkable job in adapting the true life tragedy of 22-year old Oscar Grant III (Michael B. Jordon), who died at the hands of the BART transit police. Coogler begins the film with the actual phone video recording of the police abuse and the shooting of Oscar. Time jumps back a day to New Year’s Eve morning and Oscar is with his girlfriend Sophina (Melonie Diaz) and their daughter Tatiana (Ariana Neal). Oscar has had a tough life, in and out of prison, but he promises Sophina that he is a changed man. The camera follows him through this day, his mother’s (Octavia Spencer) birthday, as he prepares for the celebration set for later. He also makes plans with his friends to go into San Francisco for the fireworks display celebrating the New Year. Michael B. Jordan gives a fully dimensioned, commanding performance and garners a great deal of sympathy for Oscar over the course of his last day on earth. Oscar is shown as a loving father, son and boyfriend in an environment dominated by women. His mom is concern about driving into the city late at night, causing Oscar to make a fateful decision. Knowing how his day will end, Oscar’s story leaves a queasiness in your stomach as you know you are watching him through his last hours of life. Olivia Spencer and Melonie Diaz are believably realized as Oscar’s family, though other characters are mostly two-dimensional. Ryan Coogler does a remarkable thing with his first feature film. He makes it look like he has been in the business as a director for years. “Fruitvale Station” is a mature, well-paced and well-told but very sad story.