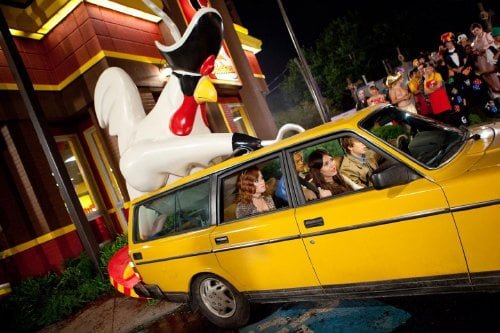 Wren's (Victoria Justice) Halloween party plans are dashed when she's made to babysit her little brother Albert (Jackson Nicoll, "The Fighter"), but things get worse when he disappears amongst the trick or treaters. She, her best friend April (Jane Levy, TV's 'Suburgatory'), a couple of yearning nerds and a convenience store clerk will have a night long odyssey learning the importance of "Fun Size."

This Halloween entry from television producer Josh Schwartz making his directorial debut is a bit hard to quantify - it's a family film that tries to be a little edgy, a comedy that has few to no laughs, an unoriginal story from Max Werner (TV's 'The Colbert Report') with the fingerprints from many other films, from "Revenge of the Nerds" to "Sex Drive" to "The Rocker" to every film about a high profile high school party or family coping with the loss of a parent - and yet by the time it's over, I found myself liking it, despite its flaws. "Fun Size" is a sweet little family film that may be too dorky for the age group at its center and require some parental explanations for the Albert-aged set. Wren's a very pretty girl who's such a nerd it's a bit inexplicable why sexy-and-social-conscious April's her bestie. When they run into Roosevelt (Thomas Mann, "Project X") and Peng (Osric Chau, "2012") on the way to school and Wren starts up a praying mantis dance in the street, April all but vomits. But Wren nonetheless manages to attract the attention of Aaron Riley (Thomas McDonell, TV's Suburgatory'), the hottest boy in school, driving by in his BMW and gets a personal invite to his high profile Halloween bash. Only trouble is, ever since her dad died recently, mom Joy's (Chelsea Handler, "This Means War") been compensating by acting too young for her age and mom informs Wren she has to take Albert, the bane of Wren's existence, out trick or treating so she can go to a party with her twentysomething boy toy Keevin (Josh Pence, the Winklevoss twin who ended up with Armie Hammer's face). In a Cleveland neighborhood where folks apparently have Hollywood studio budgets to do up decorations and fill the streets with extras, though, Wren and April lose Albert, dressed as Spiderman with one arm ripped off, in a haunted house. Roosevelt, who's long had a crush on Wren, comes to her rescue. The film follows three threads - there's Wren's search for her brother, Albert's increasingly bizarre adventures and Joy's humiliating realization that she's partying with people way too young for her under the supervision of parents her own age. Wren's search includes a stint at Aaron's party where signals between her and Roosevelt get crossed and where April's eyes are opened. Albert hooks up with Fuzzy (Thomas Middleditch, "The Campaign"), a bizarre man child looking to get revenge on the girlfriend Lara (Abby Elliott, TV's 'SNL') who jilted him, then ends up with sexy Galaxy Scout, Denise (Riki Lindhome, "Changeling"), and her older friends before being kidnapped by this movie's idea of a scary guy, Jurgen (Johnny Knoxville, "Jackass"). He's always just leaving a scene as Wren arrives. We learn that Roosevelt has two stereotypical lesbian moms, Barb (Kerri Kenney, "Wanderlust") and Jackie (Ana Gasteyer, TV's Suburgatory'), who keep him on a touchy-feely leash and that, when faced with Gladiator Mike Puglio (Patrick de Ledebur, "The Perks of Being a Wallflower") and a chicken leg, Peng is scarier than he looks. The kids are good with Mann delivering on his "Project X" likability in a far more likable film. Chelsea Handler makes her less-than-enthralling thread work better than it should, supported by Holmes Osborne and Annie Fitzpatrick as Mr. and Mrs. Brueder. Young Jackson Nicholl, who does no utter a word until the film's last act, is a natural mugger without playing to the rafters (and is featured in a closing credit sequence disguising his voice making prank calls to his mom from their own bathroom). Schwartz keeps things moving along and shifts among the stories well, but he and Werner should have been able to wring more genuine laughs out of their story. A visual gag utilizing a fast food's pirate chicken statue is about as good as it gets when Nicholl's not front and center. But the filmmakers do give "Fun Size" some genuine heart, especially in the last act when Wren, Albert and Joy all let each other in and Roosevelt unnecessarily saves the day and gets the girl. An odd little movie.