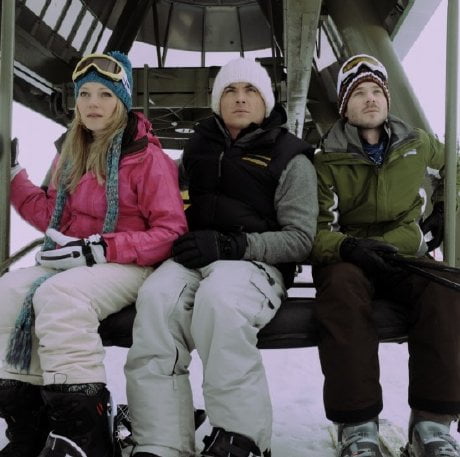 Best friends Joe Lynch (Shawn Ashmore, "X-Men: The Last Stand," "The Ruins") and Dan Walker (Kevin Zegers, "Wrong Turn," "50 Dead Men Walking") are spending their first time together with Dan's girlfriend Parker O'Neil (Emma Bell), something Joe's not altogether thrilled about. But he's not above using Parker to bribe Jason (Ed Ackerman, "The Flock," "17 Again"), the chair lift operator, to take $100 to let them on the lift. When the trio beg one last trip as the lifts are closing, circumstances cause them to be stranded 200 ft. in the air on a Sunday night. Joe and Parker will get to know each other a lot better as they face the possibility of being "Frozen."

Writer/director Adam Green paid homage to 80's slasher flicks with the slight but amusing "Hatchet." Now he takes on the 'reality horror' realm of "Open Water," the 'divers left behind' facing water and sharks movie and retrofits it for skiers facing cold and wolves. "Open Water" was also about the stress put upon a marriage, so Green wisely creates a relationship matrix to invest us in his characters. What he didn't do was create enough believable hazards (wolf attacks on humans are a rarity) or provide his characters with any real ingenuity to face them. After a day on the discounted slopes of the fictional Mount Holliston (a town in Green's native Massachusetts), it's clear Lynch is a it peeved being kept back by Parker's amateur status. Trying to buck up the situation, the threesome push their luck by convincing Jason to let them go one more time just as the resort is shutting down. Off they go and so does Jason, leaving to relieve himself, but warning the covering operator that there are 'three still up there.' No sooner does he go when a threesome on skis arrive at slope's bottom. They're just not Lynch, Dan and Parker, who haven't even made it to the top yet. At first they're convinced someone is sure to come, but as time ticks by, darkness falls and snow and hail begin to swirl, they realize they're on their own. Cell phones are dismissed with the 'no signal' excuse that has become a modern horror cliche. Of course, the first one to decide to make a move and suffer for it should be Dan, in order to leave the two relative adversaries together, and so he decides to try and jump well before they have discussed any other viable courses of action. He lands breaking both legs, the bone protruding from one. Cue wolf pack (nicely realized). The conversation that gets Lynch and Parker through the night has some interest, although Parker's declaration that Dan 'was the one' isn't very convincing, not passionate or grief-stricken enough. Better is the sudden realization that her dog at home is alone and unfed with no one aware she is away, an ironic parallel to the hungry wolves below. Cinematographer Will Barratt ("Hatchet") utilizes different camera perspectives around the lift that add visual interest and the sound department squeezes chills out of squealing metal gears and thuds into the snow. Makeup is hit and miss, with realistic facial frostbite countered by an icky 'hand stuck to guard rail' stunt that looks like glue. "Frozen" starts off really well, but just as the characters' first action to save themselves is abrupt, so too is the ending, which does little but repeat what has come before and tack on yet another horror ending cliche. It is a slight entertainment but worth a look for fans of the genre.

Three friends journey to the snow-covered mountains of New Hampshire for a ski weekend. Night is approaching and they bribe the lift operator to allow them to make one more, nighttime, run before the resort shuts down for the week. A mix-up takes the operator away from his post, leaving the controls to another who is unaware of the deal. The lights go out and the three skiers are stuck, 200 feet up, and about to be “Frozen.” Tyro feature helmer-writer Adam Green takes the simple premise about three people whose foolish misjudgment places them in deadly jeopardy. Once immersed in their predicament, Parker (Emma Bell), Joe (Shawn Ashmore) and Dan (Kevin Zegers), have to cope with the reality that they are going to die of hypothermia if they do not do something, anything. Desperate times call for desperate measures and the stranded trio need that and more to survive. It is a simple story but one that director Green handles well for the bulk of the film, only falling flat in the finale. Still, we get a decent “aw shit” concept that is frightening and has some good, tense moments. The tiny troupe of actors are not given anything profound to say but the good looking, likable cast put a believable, if implausible, spin on their characters. Their attempts to save themselves lack sensibility but that is forgivable for the tensions it builds. This is not going to have the worldwide attention (and box office) that other stranded-in-a-bad-place movie, 2003’s “Open Water,” garnered. Both are tense but the earlier film had my stomach in knots. But, then again, I am a SCUBA diver and not a skier.