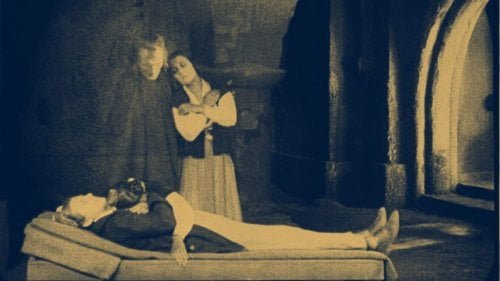 A Young Woman (Lil Dagover) and a Young Man (Walter Janssen) are deeply in love and about to marry. Until, that is, Death (Bernhard Goetzke) takes the Young Man away. For her, Love is stronger than Death and she enters his realm to free her beloved fiancé. She makes a deal with Death and is given three chances to rescue her lover in the beautifully restored 1921 film, “Fritz Lang’s Destiny.”

A carriage carrying a happy engaged couple (Lil Dagover, "The Cabinet of Dr. Caligari;" Walter Janssen) stops to pick up the cloaked man (Bernhard Goetzke, "Dr. Mabuse: The Gambler") who has recently purchased a plot beside a cemetery and walled it in. That night, they drink from a lovers' cup, but, after the woman's fiance leaves, it is replaced by an hourglass and the shadow of death. When she learns her intended has been taken and sees him in a parade of spirits disappearing through the wall, she appeals to Death who shows her three lit candles, promising her lover will be returned if she can keep even one from sputtering out in Fritz Lang's newly restored "Destiny." This beautiful 2K restoration from the Friedrich-Wilhelm-Murnau-Stiftung features the original intertitles while simulating the color tinting and toning of the original not seen since the 1920's. The film's German title, "Der müde Tod," translates to "The Weary Death," revealing a figure burdened by fate. This near masterpiece of German Expressionism finds Lang (along with his "Metropolis" and "M" cowriter Thea von Harbou) experimenting with exotic locations and fantastical situations in what we are told is a 'German Folk Tale in Six Verses.' Unveiled at the 2016 Berlin Film Festival, Kino Lorber's release is a real treat for cinephiles. The woman is seen entering Death's Fortress via a high, narrow Gothic-arched stairway, dark at the bottom, light in its upper reaches. This shape will be repeated in each of her three attempts to save her fiance, inverted at film's conclusion. The third verse takes us to the Middle East during Ramadan where the evil Caliph (Eduard von Winterstein) condemns the young man (Janssen) who dares to woo his sister (Dagover). The fourth verse, Carnival, is set in Venice where Girolamo (Rudolf Klein-Rogge) plots against the man, Giovanfrancesco (Janssen), who has won the affections of Monna Fiametta (Dagover) The fifth verse features a Chinese magician, A Hi (Paul Biensfeldt) who takes the lovers Liang (Janssen) and Tiao Tsien (Dagover) to entertain the Emperor (Charles Puffy), but cannot distract the ruler's attentions from his female apprentice. Tiao Tsien uses her magical powers to evade him, but the Emperor has his own magical trick up his sleeve. The sixth verse sets up a moral dilemma, as Death offers one last chance to the woman who believes that love is stronger than he. It is amusing how far from its borders Lang ventures for his German Folk Tale, yet he has so brilliantly realized all these places he achieves a universality for his tale of inevitability and the bond of romantic love (per the press notes, Douglas Fairbanks Jr. was so taken with the film, he purchased remake rights and used the Fifth Verse's magical tricks for "The Thief of Bagdad.") The influences of the film can be seen in many films, from Powell and Pressburger's "A Matter of Life and Death" to Berman's "The Seventh Seal." Terry Pratchett's Discworld novels also feature Death as a cloaked skeleton monitoring lives in hourglasses. Grade: