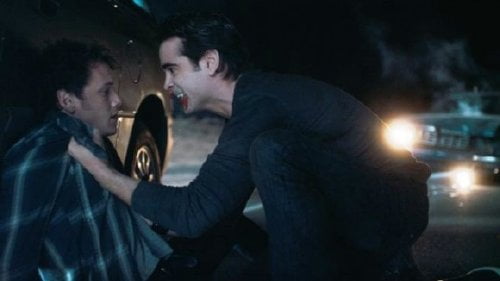 Generally, remakes of films which got things right the first time are a dubious idea at best, but every now and then one comes along which can pay homage to the original while updating the material for a new generation and forging a personality of its own. From a director (Craig Gillespie) and screenwriter (Marti Nixon) who started off well ("Lars and the Real Girl" and TV's 'Buffy the Vampire Slayer' respectively) only to have their most recent offerings turn up foul (Mr. Woodcock," "I Am Number Four") comes a giddy, gory, well cast thrill ride that, while not perfect, is one of the summer's very best mainstream releases. The filmmakers begin twisting Tom Holland's original 1985 premise from the film's onset. Taking a page from Zack Snyder's "Dawn of the Dead" remake, the filmmakers begin with a horrific attack in which we see who we later learn is Charley's former childhood friend Adam (Will Denton) try to hide from the unseen monster who has slaughtered the family members gorily arrayed around him. Cut to Charley ogling the 'Juicy' written across the butt of neighbor Doris's (Emily Montague) pink sweatpants before being chastised by his realtor mom as she piles fence posts into the back of her van, two sly foreshadowings in one scene. Charley still has a hot girlfriend named Amy (Imogen Poots, "Solitary Man"), but now he's avoiding nerdy Ed in order to maintain his cool cred. Ed sticks around in human form long enough to point out to Charley that Adam's been missing for ages, that people who've gone missing form a circle around Charley's new neighbor and that their suburban Las Vegas neighborhood where many work nights and sleep during the day is the perfect cover for a blood sucker (clever update). Just like the original, Amy becomes annoyed when Charley is distracted by what's going on next door while she's in seduction mode, but this time around, both Amy and Mrs. Brewster are quickly clued in that Charley's anxiety is warranted. When this vampire isn't invited in, he does something about it. Charley's prior experiences with Jerry are suspensefully funny, then downright horrific (in a chilling image I cannot remember having ever seen in a vampire film before, Doris signals a hidden Charley to keep quiet as that juice of hers is being drained). The 1985 film managed to walk the line between camp and real horror and so does this one - after an insane chase which stops on a deserted stretch of highway, Jerry slaughters a surprise guest star from the original film only to be temporarily felled by one of the funniest product placements in movie history. A Chris Angel clone might be an obvious replacement for Roddy McDowall's creature feature host, but it plays well into the Vegas setting and David Tennant brings his own spin into the famous/fraidy dynamic. If the filmmakers missed one golden opportunity, it was to work their vampire into Vincent's stage show as a real bit of Grand Guignol a la "Interview with the Vampire," perhaps as a replacement of the dance floor scene where Jerry sinks his fangs into Amy. Their multitudinous climax offers some freaky new visuals while maintaining the outsized fangs originally seen on Amy (FX improvements are a big plus here). Colin Farrell just keeps getting better. His deep-voiced Jerry may not be as smoothly sexy as Chris Sarandon was, but this film goes for edgier brutality over romanticism, keeping it fresh during the onslaught "Twilight" has wrought. He's intense while showing an amusement over how his intelligence is underestimated by those he hunts. Yelchin's perfectly cast as a former nerd who's managed to step up and he brings a strong realism to the horror he's witnessing. Poots gives Amy some soul while Tennant works to regain Vincent's while slinging some great one-liners. Mintz-Plasse is merely OK, a base for some terrific special f/x. Support includes siblings of more famous stars like Dave 'brother of James' Franco as Charley's bud Mark and Sandra 'sister of Sofia' Vergara as Vincent's playmate Ginger. The film does have a couple of rough spots. Charley returns to the ruins of his home which appears to have gone unnoticed overnight and the segue to the film's coda is choppy (and misses the delicious final gag of the original). Original Music by Ramin Djawadi (HBO's 'Game of Thrones') borrows orchestral flourishes from Coppola's "Dracula." Javier Aguirresarobe's ("The Others," "Twilight: Eclipse") camerawork may have looked even better if not shot in 3D, which, as usual, can be muddy. Dispensing with current trends to use the format for depth only, the filmmakers enjoy flinging things at the audience, old style, beginning with a paint can before amping up with vampire guts. Opening and closing credits employ the format inventively. 2011's "Fright Night" deals some real surprises (one early fakeout may just make you gasp). It's a creative updating and a damn fine entry into the vampire genre in its own right.