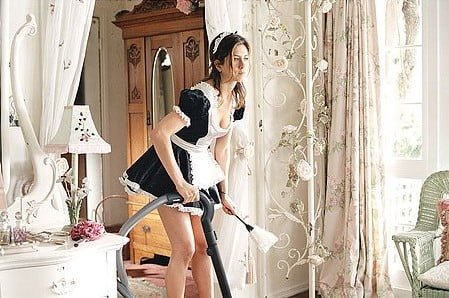 Olivia (Jennifer Aniston) floats through the lives of her three best friends, avoiding money issues and accepting the generous largess of her pals. But, as her life takes a satisfying turn, the lives of her buddies start to unravel in “Friends with Money.”

We’ve been here before with this ensemble story of four lifelong friends – Olivia (Aniston), Jane (Frances McDormand), Christine (Catherine Keener) and Franny (Joan Cusack) – now from different walks of life. Olivia has the humble job of maid-for-hire, content to clean others’ homes, smoke pot and obsess over a failed affair. And, she’s not married. Franny is fabulously wealthy. Christine is a successful screenwriter with husband David (Jason Isaacs). Jane does quite well financially as an haute couture designer. The cliché-ridden script by Nicole Holofcener travels no new territory as the well-off friends make it there job to help Olivia find happiness. But, they should look toward themselves as their lives aren’t so hot, either (except for, maybe, Franny – who is so rich that, maybe, money can find happiness). Their attempts to secure O a mate fails miserably when they fix her up with Fran’s personal trainer, Mike (Scott Caan), who, after a blind date, accompanies Olivia on her cleaning jobs. He takes advantage of her by demanding a cut of her pay – for his “help.” Easily intimidated Olivia readily gives in to his unreasonable claim, showing a timidity that she, we hope, must and will overcome. Things roll along as expected as the well-to-do friends show the cracks in their relational facades: Christine and David having life-altering marital problems; Jane has issues with washing her hair (she doesn’t) and everyone speculates about the sexual preference of her husband, Aaron (Simon McBurney); and, Fran has guilt issues over her fabulous wealth. All the while, Olivia struggles to find her own life and someone to share it with. It’s pretty easy to guess who is going to have the happily-ever-after ending. The surprise is in her perfect mate. The good thing about “Friends with Money” is its cast. Aniston, with scruffy hair and no makeup, looks unglamorous and does a credible job as a woman who eschewed her previous life (she was a teacher at a prestigious private school but left when the students ragged on her blue collar background) and took the slacker way out. The best friends are well played by Keener, McDormand and Cusack, with Joan giving a light comedic turn to her Franny. The male spouse supporting players are well cast with Isaacs, McBurney and Greg Germann giving some depth to their characters. Techs are solid. Despite the clichéd script, “Friends with Money” is entertaining, well acted and, thankfully, short (just 88 minutes). It will attract a femme audience where it should do well enough with its friends-always sentiment both at the theater and home vid.