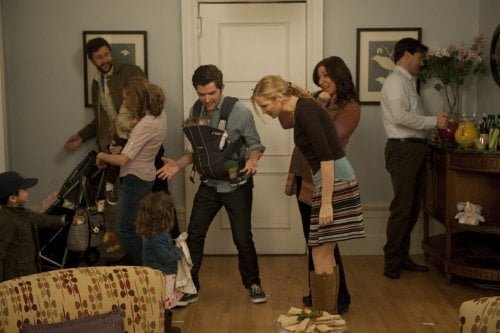 When their married friends begin having children, singles Jason (Adam Scott, TV's 'Parks and Recreation') and Julie (Jennifer Westfeldt, "Kissing Jessica Stein") note the negatives babies seem to bring into their friends' relationships and decide that maybe they can come up with a better way. As they start off with no romance to kill, they think they can have it all by becoming "Friends with Kids."

In her directorial debut, writer Jennifer Westfeldt has single-handedly restored both the romance and comedy to the sadly abused romantic comedy genre. Strangely, she does this with a mini-reunion of the "Bridesmaids" cast, a film that garnered Kristen Wiig an Oscar nomination for writing male grossout gags for a female-centric film. But in Westfeldt's hands, despite the usual worn down path of romcom essentials, everything here rings not only true but touching - a second act speech by Adam Scott actually brought tears to my eyes. The film begins not with a 'meet cute' for the characters but for the audience. Jason's phone rings at 4:08 a.m. and he answers to be given the option 'shark or alligator?' It's Julie calling from another apartment in the same building, playing at their long standing game. Gradually it is revealed that neither is alone, an economic way to establish that while Jason is a ladies' man with short expiration dates on relationships, Julie is his opposite, going long stretches without sex. They hang up with a promise to meet that night with their habitual gang. Leslie (Maya Rudolph, "Bridesmaids") is Julie's best friend, comfortably married to Alex (Chris O'Dowd, "Bridesmaids"), six years her junior. Ben (Jon Hamm, "Bridesmaids") and Missy (Kristen Wiig, "Bridesmaids") have such a constant jones for one another, they leave their friends waiting for twenty minutes to indulge in a quickie (Westfeldt is generous loaning her real life man Hamm to make up for his character's poor treatment of Wiig as a Bridesmaid). But then the kids come. A stressed out Leslie nags and harangues clueless Alex while Missy's motherhood transforms Ben's lust into disgust. Jason and Julie share their amused repulsion at receiving a photograph of 'Cole's first poo in the potty.' As both are still single, Jason makes a 50/50 parenting suggestion which Julie is pleased to realize is not in jest. They share the idea with their friends to equal but totally different, unvoiced concerns. Jason makes it clear there is no sexual attraction, Westfeldt's concession to 'the obstacle,' but the deed is done the old fashioned way (and the director treats it so cinematically, too, favoring fade-to-black for sex scenes). Now, there will be no surprise as to how this will end, but the way Westfeldt gets there is simply terrific, from her flipping a disastrous 'real parents' dinner party into the 'experimental parents' perfect brunch, to the parallel romances Jason and Julie both take and beyond. The dissolution of one marriage while another soldiers on, evolves even, is honest. Westfeldt's film feels like living life, only more entertaining. Westfeldt may not be the most visual of directors - aside from transitional montages that celebrate New York City, she mostly puts groups in a room and shoots - but she certainly has created a terrific group dynamic. She not only had the chutzpah to cast Megan Fox in her little indie movie, but is rewarded with the actress's first natural performance. This is a cast that's comfortable with one another, unafraid to let it all hang out, and should be remembered as one of the year's best ensembles. Adam Scott makes the leap to leading man with confident grace and has wonderful chemistry with his director. I'm convinced that Maya Rudolph is simply a national treasure and she and O'Dowd are amazing together (watch how O'Dowd distractedly dries his hands on the edge of Rudolph's sweater or how one believably bates the other, one character pushing the other's buttons, but with palpable affection). Hamm is all Scotch fueled bad boy bluster against Wiig's somewhat two-note character (she remains in the film post-divorce, yet all but vanishes). Edward Burns ("Man on a Ledge") doesn't overdo the 'perfect man' that is Kurt, Julie's post-baby suitor and Lee Bryant ("Airplane!") brings a material warmth to Julie's mom, a contrast to Jason's more sitcommy parents (Kelly Bishop (TV's 'Gilmore Girls') and Cotter Smith ("X2")). "Friends with Kids" is a modest production that reaps extravagant rewards. I loved this movie.