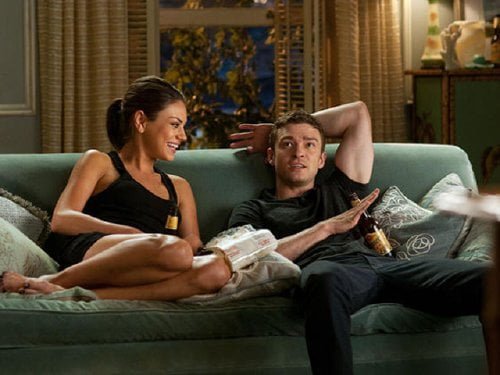 Dylan (Justin Timberlake) is an LA magazine executive on the look out for a new job. Jamie (Mila Kunitz) is a corporate headhunter who finds him a great position with GQ in New York City. The two become fast friends and decide, against everything Hollywood movies have told them, to add sex to their friendship. They know that, against all advice, they can pull off being “Friends with Benefits.”

Dylan (Justin Timberlake) is a West Coast guy who edits a popular blog when he's called to New York City by recruiter Jamie (Mila Kunis, "Black Swan"), who thinks he'll be perfect for the status job of arts editor for GQ magazine. After meeting cute at the airport and Dylan's successful interview, Jamie pulls out all the stops to get him to accept the job. Once he does, their camaraderie continues and they find they are both in the same emotional state to become "Friends with Benefits." Cowriter (with Keith Merryman & David A. Newman/director Will Gluck ("Easy A") takes on the second 'sex-without-relationship' film starring a "Black Swan" ballerina, and, while every romantic comedy is based on contrivance, Gluck's is the far more naturalistic of the two. "No Strings Attached" wasn't a bad film and "Friends with Benefits" isn't a great one, but the former strained credulity and the latter sparks with chemistry. Gluck tries a little too hard at the onset to contrast the L.A./NYC vibe with a pace that's just too frantic, but after a while, the film settles in. That first night in New York features a flash mob in Times Square; a chance and inexplicably hostile run-in with Jamie's friend, Olympic snowboarder Shaun White, at an outdoor bar and the view from Jamie's favorite secret place on the roof of a high rise. It's like a 33 LP being played at 45 rpm. Dylan slips right into his high profile role at GQ, making friends with sports editor Tommy (Woody Harrelson), a most unconventional gay man with very little filter in expressing his desires. But it's Jamie he continues to meet for lunch and hang out with and eventually romantic history comes up and a deal is struck on Jamie's Bible app. The non-romantic agenda allows the two to be humorously forthright with each other. Then the Fourth of July weekend approaches and Jamie is once again let down by her flighty mom Lorna (Patricia Clarkson, "Easy A," whose charm almost but not quite helps us overlook the quirky design of her character), so Dylan invites her to join his family at their Malibu beach house. Jamie learns a number of things about Dylan she never knew, like the pain of seeing his dad (Richard Jenkins, "The Visitor") slipping away to Alzheimer’s, his fear of heights and his mathematical inability while Dylan's family, including his sister Annie (Jenna Elfman, TV's 'Dharma & Greg') and nephew Sam (Nolan Gould, TV's 'Modern Family'), all kept noticing what a perfect match (natch!) Dylan and Jamie are. Cue obstacle. It's hard to believe Timberlake and Kunis have never worked together before, but they are very comfortable in each others' skin. Gluck and his stars sell the right kind of relationship - one based on friendship, without any of the game playing awkwardness those in the mating dance use to only show themselves at advantage. The two really work this, but they've got some great support as well. That Clarkson sells what has become rather a comic cliche - the older person whose high interest in sex is supposed to be embarrassing - underlines what a talent she is (it also appears that Gluck knows restraint as a ridiculous bondage scene featuring her in the trailer is not in the finished film). Jenkins is always a plus and after giving a moving performance of an autistic dad in "Dear John," here he does the same with Alzheimer's sprinkled with a few more laughs. Perhaps the biggest surprise is Elfman, who is just as natural as a wise-cracking but caring sister to Timberlake as Kunis is a romantic pairing. Gould does well by his ill-timed magic tricks. SNL's Andy Samberg and "Easy A's" Emma Stone show up early and briefly as Jamie and Dylan's most recent failed romances (in a bit of fake-out cross cutting). Shaun White's presence is just weird. After that initial bit of hyperventilation, Gluck's pacing is just right, delivering some pretty big laughs along the way - the Hollywood sign has never been as well used for funny. The soundtrack is an eclectic mix, with Semisonic's 'Closing Time' and Kriss Kross's 'Jump' particularly well integrated (and points for the first use of Jonelle Monae ('Tightrope') in a movie).

On the heals of this year’s “No Strings Attached,” “Friends with Benefits” covers the same ground with the fairytale that sex without emotional commitment is possible between guy/girl friends. Since that has never worked in any movie on this subject, why would it work here? Well, it does not, as expected, making “Friends with Benefits” a series of telegraphed clichés that should not work. But, because of terrific chemistry between Timberlake and Kunitz and a veteran supporting cast, it does. The bright, witty performances by the film’s stars make for a pleasant and fun rom-com (with too many sex scenes, though – less is more, folks) that goes as expected to its happily-ever-after ending. The supporting cast – Patricia Clarkson as Jamie’s free spirited mom (a riot); Woody Harrelson as Tommy, Dylan’s openly gay and very randy colleague (also a riot); Jenna Elfman as Dylan’s supportive and sweet sister Annie; and Richard Jenkins as his Alzheimer suffering dad – all help to make “Friends with Benefits” a better movie than it has a right to be. Director Will Gluck (“Easy A”) displays a sure hand at comedy and garners fine performances from his talented actors. Justin Timberlake proves that his performance in “The Social Network” was not a fluke and Mila Kunitz is both beautiful and funny. Clarkson and Harrelson steal the show when on screen, showing their veteran chops at doing comedy and doing it well. The script by committee – six writers are credited – strictly adheres to the formula “Friends with Benefits” must follow, so there are few surprises in the “sex between friends can work” plot. It is not the writing we are her for but the performances that breathe life into what could have been mediocre. My only complaint is that the dialog and action are too frenetic and, again, there is too much unnecessary sex.