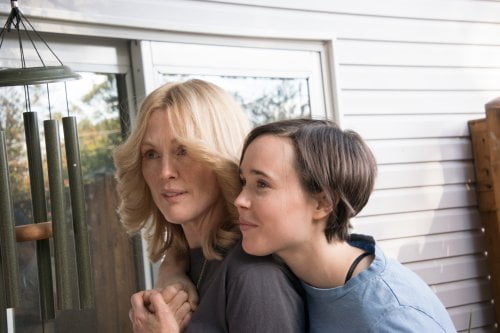 After more than two decades as an Ocean County police detective, Laurel Hester (Julianne Moore) was respected by her male colleagues, but kept her homosexuality secret, afraid it would create one more obstacle to her career. When she met Stacie Andree (Ellen Page, "Juno," "Inception"), even though the two women had radically different outlooks and a nineteen year age difference, the attraction was immediate. But in 2005, shortly after becoming legal domestic partners and buying a home together, Laurel learned she had stage IV lung cancer. She petitioned the Board of Freeholders to have her pension go to Stacie, something which would have occurred had she been a state rather than county employee, but she was "Freeheld."

This passion project led by the documentary short's producers along with star Ellen Page is certainly well intentioned, a necessary reminder of gay rights struggles in a country where many disagree with the Supreme Court's decision to legalize gay marriage. Yet even with "Philadelphia" screenwriter Ron Nyswaner was engaged to adapt the material director Peter Sollett ("Nick and Norah's Infinite Playlist") has been unable to raise it above an old timey TV-issue-of-the-week movie. Stars Moore and especially Page do their best to flesh out their characters, but their story isn't given enough time to settle in before we're thrown into political wrangling with a sideshow of circus courtesy of Steve Carrell's ("Foxcatcher") over the top interpretation of LGBT activist Steven Goldstein, an attempt at levity that's tonally off. The film begins by establishing Hester's chops as a female cop over achieving to maintain equality among her all male force. When a possible witness to a murder refuses to respond to questioning, Laurel steps in, telling the young woman that keeping a secret in fear is no way to live, the irony obvious. Laurel travels far from home to play volleyball badly in hopes of meeting someone and catches the eye of Stacie, who asks for her number. They enjoy a date at a C&W bar, Stacie dragging Laurel onto the dance floor, but when Laurel spies fellow cop Todd Belkin (Luke Grimes, "American Sniper," "Fifty Shades of Grey") chatting to a guy at the bar she panics. After Stacie spends the night at her Ocean City condo, Laurel freaks when Stacie asks if she should answer her ringing phone and coldly ends the date. Laurel apologizes by phone, telling Stacie she's amazing and honest. Cut to one year later as the two tour the house that will become their home. Laurel finally gives up on calling Stacie her roommate after her partner, Dane Wells (Michael Shannon, "99 Homes"), drops by unannounced with a gift and leaves dumbfounded that she's perpetuated a lie for so long. Then the cancer diagnosis comes in. Sollett spends the rest of the film shuttling between scenes of a tearful Stacie staying by Laurel's side with Dane's attempts to rally the work place for support as the five Republican freeholders refuse to budge, citing family values and economic considerations. Carrell barrels in as the founder of Garden State Equality who wants to use the situation as a rallying cry for gay marriage rights when he's not flirting with Wells. As the freeholder with a conscience, Josh Charles (Showtime's 'Masters of Sex') reps the lone voice of reason who comes up with the bit of public record that will uncover a freeholder argument as hypocrisy of the highest order while Grimes plays his police department parallel. It's all so neatly laid out yet so lacking in the type of detail that would give it emotional soul. Even the dog Stacie so yearns for and gets with Laurel goes MIA once it's served its purpose. Page is quite good here as the younger woman comfortable in her life style choices, ready to stand up for herself (illustrated by her challenge to rotate tires in under 8 minutes in order to secure a mechanic's job) as well as open up to a potential partner, but with one exception, she's relegated to weeping throughout the film's second half. Moore is either brittle or empathetic without ever finding a balance between the two, her best scene a defensive move against a gang of toughs who challenge a tender moment. Both actresses are at the mercy of filmmakers who champion issue over characters. Better at finding equilibrium is Shannon, who suggests his tough guy may be crushing on his partner before manning up, accepting her relationship and fighting for the right thing. Cinematographer Maryse Alberti ("The Wrestler") suggests the seaside locale with a pastel palette but rarely opens up the frame beyond conversational two shots. Given the pedigree behind the film, "Freeheld" is a disappointment, a big issue choked by uninspired vision. Grade: