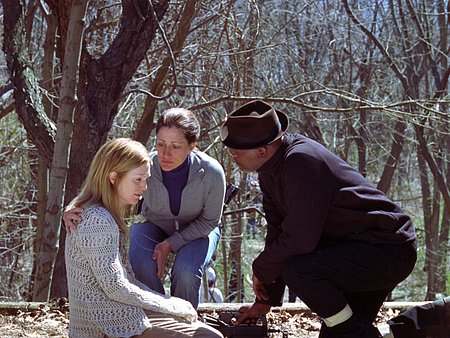 A woman wanders the dark, mean streets of Dempsy, New Jersey, dazed and confused. She mutely walks into a local hospital ER in shock and with bloodied hands. After being treated for her wounds and hysteria the woman, Brenda Martin (Julianne Moore), recounts her horror story of being carjacked by a black man to police detective Lorenzo Council (Samuel L. Jackson). But, he knows she is not telling the whole story in Freedomland.”

Hours after Brenda enters the hospital she tells Lorenzo her shocking news: her four-year old son, Cody (Marlon Sherman), was asleep in the back seat of the car when she was dragged out of it by the 'jacker. An all-points bulletin is put out to search for the missing white youngster and the black, working-class project in Dempsy, near where the carjacking occurred, comes under siege by the police investigating the now-kidnap case. The residents angrily grumble that cop presence has never been so huge in the project until a “white” child goes missing. “Freedomland” divides its time between the investigation, the building racial tensions and Brenda’s real story. Helmer Joe Roth adapts the novel by Richard Price, who wrote the screenplay, and comes up with a high-tension, fragmented film that is obvious in its intent. There is more conflict-driven tenseness that feels manufactured than there is real storytelling. Many characters are introduced but their presence seems a construction rather than a crafting. The cast is richly populated but, because of their lack of development in the screenplay, none are properly utilized. Samuel L. Jackson, whom I love as an actor, plays detective Lorenzo with his usual blustering manner. This overshadows the character’s back story which is never told except with symbols – like Council’s son doing hard time because he was a bad father, then showing how Lorenzo has grown into a better human being because of his past failings. But, this isn’t fleshed out nearly enough. Julianne Moore gives a one-note performance as Brenda. You can see beneath the surface of her current plight that she is a deeply troubled woman but her real story holds no surprises. Even I figured out the “twist” well before the end. Edie Falco does yeoman’s work as a concerned parent who lost her own child to violence and dedicated her life to helping others in the same situation. Others, like William Forsythe, are lost in the screenplay. Speaking of the screenplay, Price attempts to create tension, both emotional and racial, but it feels so artificial I didn’t believe it at all. This, I think, is due to the clunky direction by Joe Roth whose helming pedigree includes such duds as “America’s Sweethearts” and “Christmas with the Kranks.” Techs for “Freedomland” are well done with edgy camera work by Anastas Michos giving the film an energetic, gritty look. Freedomland” is the kind of forgettable winter doldrums film that will, with its stars Jackson and Moore, attract a fare size audience for its opening weekend but will fall off the radar screen very quickly. I had a hard time remembering it the day after I saw it.