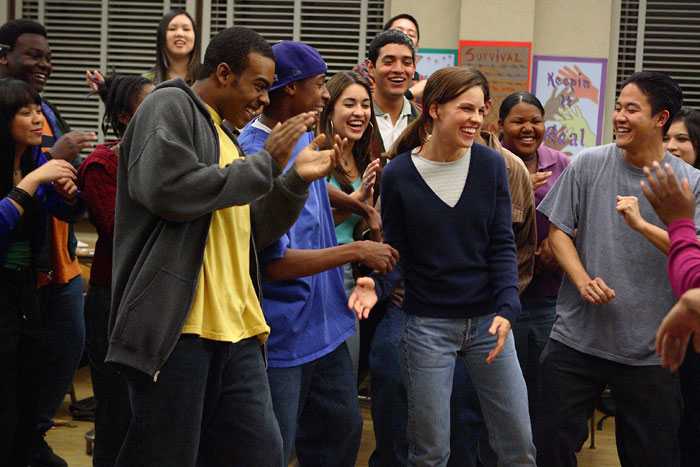 Newly minted, fresh faced and idealistic high school teacher, 23-year old Erin Gruwell (Hilary Swank), is assigned the thankless task of trying to teach the remedial dregs of a gang-dominated Long Beach school. But, she is not deterred by her tough, violence-hardened students or the lack of support by her superiors and dedicates herself to open her wards eyes to a bigger world in “Freedom Writers.”

In 1994, brand new teacher Erin Gruwell (Hilary Swank, "Million Dollar Baby," "The Black Dahlia") has an idealistic, squeaky clean outlook on her profession that does not prepare her for the reality of racially and ethnically divided Wilson High School. But then she opens her student's eyes by having them recognize the commonality of their lives while expressing individual voices in private journals and turns a class of high school freshmen into a published group known as the "Freedom Writers." As inspirational teacher movies go, writer/director Richard LaGravenese's ("Living Out Loud") take on a true story hues close to reality by using the real Freedom Writers' words and embracing the geeky earnestness of his main character. By emphasizing her dazzling, toothy smile and can-do cheerleading style, Hilary Swank makes her well-intentioned misfit utterly believable. A well chosen cast of unknowns and up and comers flesh out the story with differentiated characterizations while Academy Award nominee Imelda Staunton ("Vera Drake") and character actor John Benjamin Hickey ("Flags of Our Fathers") turn old school educators into contemporary villains. Young Latina Eva (April Hernandez, TV's "Law and Order," "ER") is our guide into the young teens' world, narrating an existence where simply leaving one's house makes one a potential gunshot victim. As LaGravenese shows us the everyday violence of the integrated Blacks, Asians and Latinos and segregated society they lead on the white's home school turf, Eva describes it, setting the stage for Erin's arrival. An excited Gruwell, bedecked in prim pearls, hopes to share her ambitious class plans and reading lists with her superior, but a condescending Margaret Vail (Staunton) smirks and advises lower standards. Seeking help for her curriculum from her junior/senior counterpart, Brian Gelford (Hickey), Erin is shocked to be brutally rebuffed. That is nothing, though, than the violence she witnesses both in her barely controlled classroom and on the school grounds. The shining naif is told by Eva that she is hated because she is white and by Andre (Grammy–nominated artist Mario) that she is expecting respect she has not earned. Two events finally give Erin the wherewithal to connect with her class. A convenience store shooting involving three separate factions of her class creates tension she uses to break down barriers via shared experience. Then, when she intercepts an ugly racial caricature, she uses the Holocaust as an example of where the insidious nature of racial hatred leads. Her anger and passion make the kids take notice. One misguided reviewer failed to understand how the film could equate the Rodney King riots to the Holocaust, but the point was missed - it is the racial profiling of the Jews used by the Nazis to further their cause that Erin reinterprets for her students' culture. This leads as a jumping off point for eye-opening experiences at the Simon Wiesenthal Center and subsequent visits with real Holocaust survivors (played by the real deal by Renee Firestone, Eddie Ilam, Elisabeth Mann, and Gloria Ungar), field trips which Erin underwrites with two additional part time jobs. Her dedication to her students results in a personal breakdown, costing her her marriage but gaining the renewed support of her liberal dad (Scott Glenn, "Training Day"). Swank may have been unconvincing as a femme fatale in her last outing, but this role is tailor made for her and the actress pulls in the audience along with her character's pupils, even after both parties may initially scoff. Her determined teaching spirit is beautifully set off by superiors who do everything to undermine her, one masking threat as outrage (Staunton), the other determined to stake his tenured territory. The kids are all terrific and, as is so often not the case in this genre, distinct. Hernandez shows the conflict in a young woman wishing to buck the pressure to stand by her own kind when they are not in the right. Newcomer Jaclyn Ngan is her suspicious Cambodian counterpart who blossoms into a friend. Jason Finn ("Mercy Street") is the angry former street thug who turns around via a most unlikely hero - Miep Gies (Pat Carroll, "Songcatcher," voice of "The Little Mermaid's" Ursula), the protector of Anne Frank. Also good is Hunter Parrish ("RV") as the class's terrified token white boy, Ben. "Freedom Writers" loses some steam in its final act when real drama is replaced by the trumped up sort, a fight for Gruwell to keep her class in their third and fourth years, but at least she's still bucking the system. Erin Gruwell used her English class to teach history in order to halt hatred and her "Freedom Writers'" tales invite compassion.

If you’re expecting to see “To Sir, with Love” remade in this modern day true story of one teacher’s mission to make a difference with her students, you are in for a surprise. Where the earlier film showed squeaky clean English high school “thugs” that Sidney Portier changes into upright “nice” kids, “Freedom Writers” deals with the real problems facing inner city kids that the system has decided to leave behind. It is post Rodney King riots in Los Angeles and Wilson High, a former A-rated school, has been “voluntarily integrated” – a term that means dumbed down to the lowest academic denominator. Erin, new to Wilson, is assigned the dumbest of the school’s student body and is told to simplify her lesson plan for them. Instead of educating her kids, Erin is ordered to just push them through and get them out of the school system with as little fuss as possible. Erin is determined, despite the protests of the school’s principal (John Benjamin Hickey) and administrator (Imelda Staunton), that she is going to really teach her students. She first tries to introduce The Diary of Ann Frank to the class but the idea is shot down by her superiors as too hard and complicated for the kids. She enlists the support of the superintendent of schools (Robert Wisdom) and, with her own money, buys copies of the book for the entire class. This begins the process of opening the eyes of her students as she plants the seeds of learning tolerance in her gang banger-influenced teens. What sets “Freedom Writers” apart from the typical teacher-makes-a-difference films is a combination of a solid performance by Swank as the compassionate and dedicated Erin and students that don’t seem to come right out of central casting. Usually, in an inspirational film like this, one or two of the students are given shrift and the rest are left to be colorful background characters. Here, though, nearly all of Erin’s students are given back stories and depth of character, making “Freedom Writers” a generous cut above the usual. The film starts out with one of the students, Eva (April Lee Hernandez), giving a voice over talking about the plight of inner city kids in LA. Violence and, frequently, death are a daily part of their lives where gang bangers carry guns and use them indiscriminately. It is two years after the riots spawned by the Rodney King court decision and the wounds it opened have yet to heal. Enter Erin into Wilson High and we soon learn that she has her work cut out for her when she meets her cynical students for the first time. Undeterred by her kids’ negative attitude and distrust for their decidedly liberal, middle class teacher, Erin begins a course of enlightenment designed to break through their cynicism and open their eyes to a world they have little or no knowledge of. After getting them to read Ann Frank’s poignant diary – which impacts them as she fully expected – she teaches them about the Holocaust, even arranging a field trip (to the chagrin of the school’s principal and administrator) to the Simon Weisenthal Holocaust Center. Then, she introduces the thing she wants most – to have her students to write down, daily, their thoughts in their individual journals. What transpires are a collected work called The Freedom Writers Diary (which became a published work). Freedom Writers” is a truly inspirational film that transcends the typical inspirational students- rising-above-adversity movie, making this a special work by writer/director Richard LaGravenese (adapting Gruwell’s book. Solid performances by Swank and her students are supplemented by hissable, Simon Legree-like characters by Staunton and Hickey. It is pretty black and white story of learning understanding but the film has a boat load of heart. This is the kind of film that is aimed at young adults but has such quality that it should appeal to more mature audiences, too.