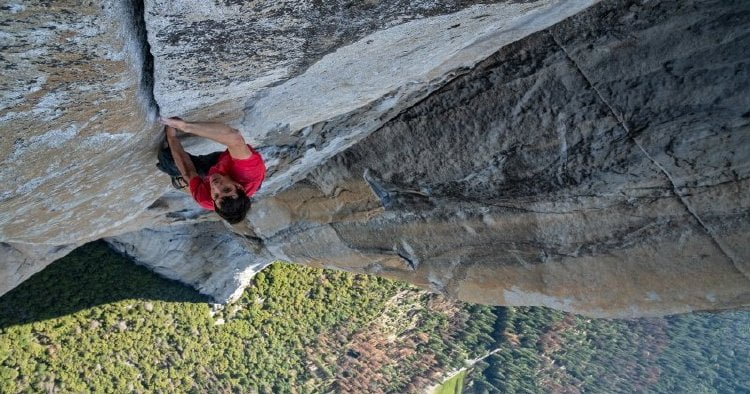 The famous granite face of El Capitan in Yosemite National Park was first conquered by a team of “siege” climbers back in 1958. But, the imposing formation has never been scaled successfully by a climber unfettered with gear - until 3 June 2017 when Alex Honnold became the first to accomplish this awe-inspiring feat in “Free Solo.”

This is the perfect film, by directors Elizabeth Chai Vasarhelyl and Jimmy Chin, for all of us couch potatoes out here who dream of being adrenalin junkies. The filmmakers, some of them actually making the dangerous climb to document the death-defying free climb by Honnold, give us a sweaty palmed, close up look at a man and the mountain he needed, in his heart and mind, to beat. We get Alex Hannold’s back story about his climbing history and the whys of what drives him to seek out such dangers. For him, the challenge of the free solo of “The Cap” is, in a word, perfection. The document of Alex’s remarkable accomplishment chronicles his early days, climbing at age 11, through to his decision and preparation for the final attack against El Capitan. “Free Solo,” while it centers on Alex, his life and his relationship with girlfriend Sanni McCandless (climbing is first and women are second), it also takes us into the production of recording, up very close and very personal, the culminating event with its vertigo-inducing photography. “Free Solo” is a good example of a documentary that brings the viewer to those places where people do things for the adrenalin thrill that the vast majority of us would never dream of trying. The filmmakers put us in the middle of Alex’s death-defying attempt to conquer the Cap and allow us, if only viscerally, to experience the thrill of conquering a dream.