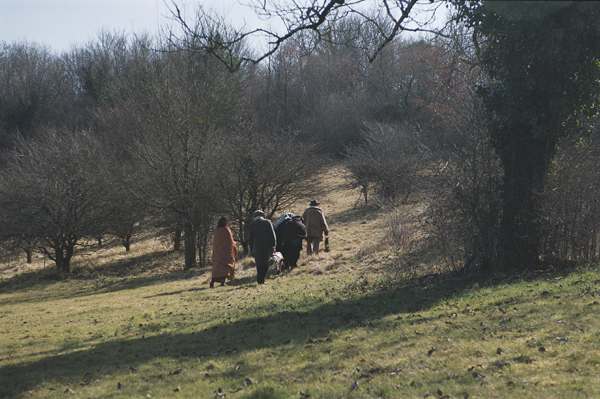 A bus trip to the remote countryside and a trudge through mucky fields bring an extended Jewish family of five to the farm of Monsieur Maury (Jean-Paul Roussillon, "Kings & Queen") whose father before him had hid Alsatians on their home in the "Free Land."

Actor turned writer/director Christophe Malavoy has chosen a familiar subject, perhaps, a story of Jews in hiding during WWII, but this delightful film shows a keen eye for composition and is imbued with well earned humor and heart. Family head Simon (Lionel Abelanski, "My Wife Is an Actress") is a prickly type clearly saddled with his current responsibility. In addition to his lovely wife Léa (Olga Grumberg, "Lucie Aubrac"), Simon must look out for his very pregnant sister-in law, Mauricette (Elisa Tovati), his dotty mother Mme Schwartz (Tsilla Chelton, "Tatie Danielle") and his adolescent nephew Henri (Frédéric Papalia, with the looks of a 1950's Mediterranean movie star), for whom he bears little patience. Old peasant Maury takes Henri under his wing, exposing the boy to life in Charente even as an altar boy. His daughter-in-law (Mathilde Seigner, "Harry, He's Here to Help"), who is referred to all throughout the film as 'the daughter-in-law,' keeps the household running and delivers food to the refugees. Her young son (Quentin Grosset) observes all and befriends Henri. The women quickly form a bond over household chores. Occasionally, Maury alerts them to danger and they must hide in the hills. All but tragically one are able to return to their homes at the end of the war. "Free Land," is of course a pointed titular misnomer, as Vichy France was anything but free for most. But it is domestic politics which are at play in this combined domestic unit of city folk living with their country brethren. The dialogue is often funny with country wisdom ('It's a sad fact that a house needs a woman. It's like rain' - Maury on his chiding daughter-in-law') or ersatz senility (flirtatious Schwartz's attempts to cheat at dominoes), but it is the humanity of the characters that drives the film, which has a real spirit of whatever it takes to pull through together. Every role is well cast, with the elder folk providing most of the laughs - Roussillon, who resembles a Gallic Burt Young, is a 'character' without overdoing it while Chelton's dottiness occasionally plays too broadly. Roussillon is also nicely matched against Abelanski, one man taking on challenge calmly, the other struggling every step of the way. Although the film seemed to have some problems with color correction, or, in fact, use of different stocks which occasionally give it a sepia tone, for the most part "Free Land" is rich with autumnal hues and beautifully composed images. There has clearly been a lot of loving effort expanded to ensure everything looks just right and it is a pleasure to watch. Even Maury's mangy jacket has been chosen with care, its sheepskin collar an extension of his jowls' white stubble. A few brief fantasy scenes - a naturally surreal dream, an imagined recollection - are expertly inserted. In watching "Free Land," I was often reminded of 2002's "Almost Peaceful," a post-war experience of another disparate group, but that film felt far more stagebound than this one, adapted from the stage.