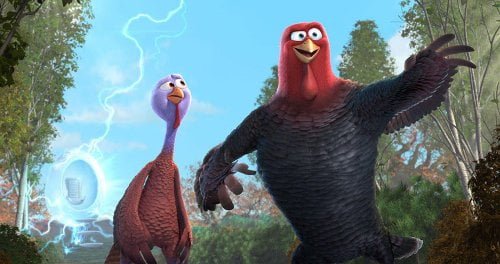 Reggie (Owen Wilson) is a rebel among turkeys. But, Thanksgiving is coming up and things do not look so good for the young bird. A little girl, who just happens to be the President of the United State’s daughter, saves the day and Reggie becomes the nation’s pardoned turkey. This good life will soon change when he is recruited by another turkey, Jake (Woody Harrelson), to join the Turkeys Freedom Front, break into a secret government facility and use its time machine, S.T.E.V.E. (George Takei), to go back to 1621, stop the first Thanksgiving and become “Free Birds”

Reggie (voice of Owen Wilson) is the only turkey on the farm who realizes the farmer who feeds them is not their friend. With Thanksgiving approaching, Reggie's in a panic, but he's saved when the President's daughter (voice of Kaitlyn Maher) insists he be the 'pardoned turkey.' Once ensconced at Camp David, though, Reggie's new life of Telemundo and pizza delivery is shaken when he meets Jake (voice of Woody Harrelson), a crazed bird who believes he's on a mission to find a Time Travel device and change holiday history in "Free Birds." Cowriter (with Scott Mosier)/director Jimmy Hayward's ("Horton Hears a Who!") attempt to rewrite history is an ill conceived notion which paints Massachusetts Governer Bradford (voice of Dan Fogler) an effeminate glutton and will most likely annoy parents with its revamped Thanksgiving menu when its not boring them to tears in what starts off well before time travel turns it into, well, a turkey. Anyone who wants revisionist Thanksgiving traditions would be well advised to rent "Addams Family Values" rather than muddle through this hodgepodge which cherry picks from other, better animations After an opening which recalls "Babe" before the pig's talents were snuffled out, "Free Birds" seems like it's onto something with its pardoned turkey set up (oddly, the President is modeled on Clinton, his unnamed daughter modeled on the ideas of other filmmakers). Jake turns out to be right about that Time Travel machine (protected by guards resembling "Monster Inc.'s" hazmat-suited CDA), but once we get the joke that S.T.E.V.E. (Space Time Exploration Vehicle Envoy) is voiced by George Takei, all humor is in the film's past. Why didn't these guys take on the corporate agriculture machine which spawned Jake instead, a worthier message to send to kids than feeding our ancestors fast food? As soon as they arrive in 1621, Reggie and Jake are in the sights of Myles Standish (voice of Colm Meaney), the colony's military protection (Standish is depicted as a textbook villain with two different colored eyes). They're 'saved' by Jenny (voice of Amy Poehler), who teaches the boys how to escape within the trees and takes them back to her father, Chief Broadbeak's (voice of Keith David), tribe. The turkeys are this film's Native Americans (which partially atones for Standish's portrayal) and Jenny's brother Ranger (Hayward) has no use for the modern Jake. But Reggie and Jake come up with an ingenious plan for saving the birds already captured by Standish and there is much rejoicing - until Reggie realizes Jake's explosive prowess has led the enemy right to their door. Bring on the fiery massacre for more family fun! The Skynyrd classic the punny title alludes to isn't on the soundtrack or even mentioned, although a lame reference to Angry Birds is. Takei's droll delivery voicing the time traveling egg-pod may spark a few chuckles, but space travel and the Pilgrims are not as well married as cranberries and stuffing. Watching this film, however, is like getting a hearty dose of L-tryptophan.

This has not been a good year for animated feature films with the exception of, maybe, “The Croods” (which is a fun, almost guilty, pleasure) or something I have yet to seen. “Free Birds” joins the pantheon of wannabe feature anime that were released this year, like “Despicable Me 2” and “Cloudy with a Chance of Meatballs 2,” both of which pale from their originals. (Are there any outstanding animation features out or coming out this year?) One thing to “Free Birds'” credit is that it tried to do something different. The screenplay, by director Jimmy Wayward and Scott Mosier and based on the story by David I. Stern and John J. Strauss, has some imagination to it. A plucky (no pun intended) young turkey makes a plan to go back in time and put a stop to the tradition of eating turkey on Thanksgiving. It is a clever idea but one that is not as well executed as it could be. I think it is because there are too many “things” going on with Reggie’s pampered life being interrupted by his recruitment by the TFF and mission to stop the annual turkey genocide. How to do that? Discover a secret government project that is working on a time machine, infiltrate the facility, hijack the machine and go back in time to stop the Thanksgiving turkey tradition. That is the plan but when Reggie and Jake travel back to 1621, they come face to face with an evil Miles Standish (Colm Meaney) leading the hungry Pilgrims to find and kill the local turkey population. Reggie must help the turkeys’ leader, Chief Broadbeak (Keith David), and his daughter, Jenny (Amy Poehler), find a way to destroy the guns and ammunition that the Pilgrims will use in their assault on the turkey’s secret lair. So, “Free Bird” is a battle between man and turkey for survival. It is up to Reggie to find a way to defuse the situation and find a compromise food to celebrate Thanks to high-tech S.T.E.V.E., Reggie saves the day and introduce a different delicious alternative to turkey. “Free Birds” is rated PG, a good thing as it deals with hunters and prey, human versus turkey battles and the use of deadly force. This is not for the little kids.