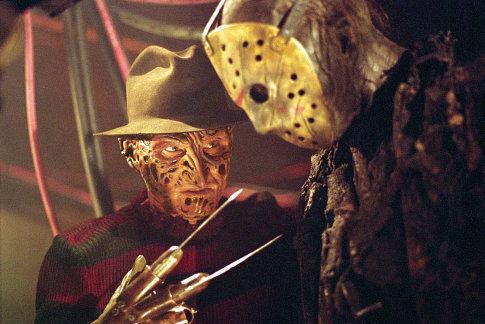 Freddy Krueger (Robert Englund) has spent many idle years as Springwood's parents have quarantined any teen who knew of him in an insane asylum. Freddy needs to get some new nightmares brewing so gets into the head of Jason Voorhees (stuntman Ken Kirzinger) to stir up trouble. Jason proves effective, but outstays his welcome on razor fingers turf leading to the horror match of "Freddy vs. Jason."

Fans have been hanging on the promise of this matchup for a decade and I think it's fair to say most will not be disappointed. Screenwriters Damian Shannon and Mark Swift (Sharkslayer) have done a terrific job mixing Elm St.'s lore with that of Camp Crystal wake and have done it with a wit that practically puts a spotlight on copulating teens and has Freddy take on the mien of "Alice in Wonderland's" hookah-smoking caterpillar to tempt a stoner. Combine this with many jumps (if not exactly scares), some decent young actors and a showdown that's like an extreme WWF smackdown for the ghoulish set and you've got a genre winner. 'Being dead wasn't a problem, but being forgotten - that's a bitch,' Freddy tells us in a prologue that brings non-fans up to speed. Freddy takes on the persona of Mrs. Pamela Voorhees (Paula Shaw, "Insomnia") to taunt 'son' Jason back into action. Now Lori Campbell (Monica Keena, "Orange County") lives at 1428 Elm St., Springwood. Dad's away and her friend Kia (Kelly Rowland of Destiny's Child) is trying to hook her up with Blake (James Callahan) but Lori still pines for Will (Jason Ritter, "Swimfan") whom she hasn't seen since she was fourteen. Meanwhile their girlfriend Gibb (Katharine Isabelle, "Insomnia") showers upstairs after sex with Trey (Jesse Hutch), an exaggerated bit of male nastiness who complains about her cigarette breath and slowness to respond to his beck and call. Trey has a very violent and final run in with Mr. Voorhees. Sheriff Williams (Gary Chalk) is determined that the kids don't discover what he suspects, but Lori overhears the name Freddy Krueger and as soon as she nods off in the police station she's following a blood drop trail and hearing 'One, two, Freddy's coming for you' for the first time. Meanwhile Will, who's seen a news report coming from 1428 Elm from the institution he and Mark Davis (Brendan Fletcher, "The Five Senses") have been cooped up in on hynocil, a dream suppressant, decides to break out to check on Lori. After Jason wrecks havoc at a cornfield rave ('Dude, that goalie was pissed about something') and Freddy's gotten strong enough to begin picking off his own victims, these kids, plus stoner Freeburg (Kyle Labine, "Halloween: Resurrection"), geek Linderman (Chris Marquette, "The Tic Code") and Springwood newcomer (from Crystal Lake) Deputy Scott Stubbs (Lochlyn Munro, "A Guy Thing") team up to stop Freddy by using Jason as their weapon. Director Ronny Yu (The Bride With White Hair) keeps the action moving and leavens the horror with just the right amount of humor (Freddy had become too much of a line tosser in past sequels, but his schtick is kept to a minimum here). The cast is a cut above the usual for this type of film with Ritter, Rowland, Fletcher and Marquette particularly noteworthy. Monica Keena is effective at looking suitably terrified. The film doesn't have a lasting creep effect, but throws enough good ideas (like Kia being faced with giving Jason mouth-to-mouth) around to keep one in the moment. The film's climax goes a bit overboard on pyrotechnics (and, goofily enough, leaves a lake dock completely intact after an immense explosion), but it serves its combatants and their legends well enough, leaving the audience with one last nudging joke.