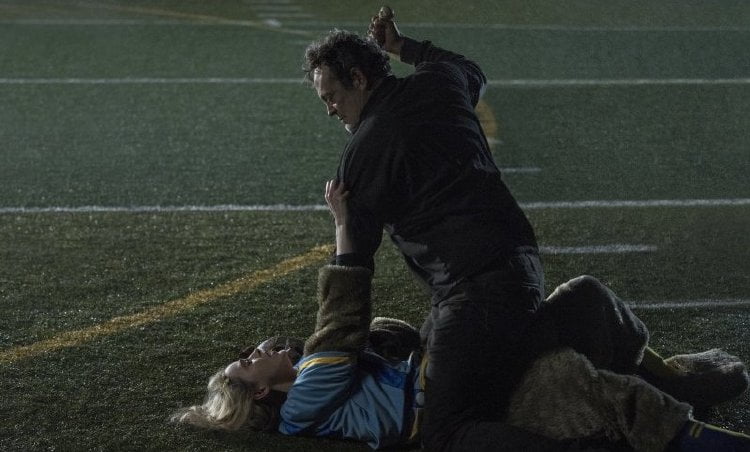 Senior year at Blissfield High is tough enough for Millie Kessler (Kathryn Newton, HBO’s ‘Big Little Lies’) when she’s attacked by a serial killer.  And this isn’t just any serial killer, but The Butcher (Vince Vaughn), whose most recent slaughter netted him a dagger with magical qualities as Millie discovers when she awakens in his body and things get really “Freaky.”

Cowriter (with Michael Kennedy)/director Christopher Landon of the "Happy Death Day" series returns with a new gimmick up his sleeve and it's a corker of a concept, one which gives us something we didn’t know we needed – Vince Vaughn getting his inner 17 year-old girl on.  While Landon has other ideas, like parodying such films as “Friday the 13th” along with generic horror tropes, Vaughn is this film’s raison d’être.

The film opens with four teens gathered in a big house, one recounting the legend of the Blissfield Butcher as a serial killer who’s returned every year since 1977 to ‘warn of teenaged debauchery.’  As one heads to the wine cellar and our narrator begins necking, he arrives right on target for a series of inventively grisly killings.  On the way out, he grabs that dagger.

Meanwhile our heroine, Blissfield High’s football mascot Beaver(!), is getting bullied, an idea we hope is meant as parody because the beautiful Newton is clearly no wallflower.  She also happens to have a clichéd pair of friends, Nyla (Celeste O'Connor), a savvy Black teen and Joshua (Misha Osherovich, "The Goldfinch"), the gay kid.  Millie’s such a good kid she’s forgoing Homecoming in order to go to a regional production of ‘Wicked’ (we are later treated to a local TV ad for it) with her mom (Katie Finneran), still depressed over the death of her husband one year earlier.  Mom’s been drowning her sorrows in white wine, something that will result in leaving Millie isolated at school after dark (thankfully she also has an older sister, Charlene (Dana Drori), who’s a cop).  While Charlene arrives on the football field in time to run off The Butcher, his knife’s already pierced Millie’s shoulder…and the younger sister who rises for breakfast is unduly obsessed with large knives.

Once Millie’s convinced Nyla and Josh that it is indeed she inside her hulking new body, “Freaky’s” propelled by the trio attempting to save their schoolmates and town from the killer in the petite blonde frame.  Vaughn’s clearly having a ball, his voice pitched high, his mincing physicality a bridge too far but comedically on point.  Newton’s got the heavier lift with less rewards, but she glowers and hulks effectively, Landon smartly countering The Butcher’s new lesser strength with his victims’ under estimations.  Mean girls like Ryler (Melissa Collazo) better watch out.  He will also inventively clap back to “Friday the 13th” with touching mother daughter talk while daughter is still Vaughn.  And while Landon may have made a teen horror comedy, he’s gone for the R rating the better to torture sexist workshop teacher Mr. Bernardi (Alan Ruck).

“Freaky” does fall into the trap so many Super Hero films do, though.  After finding many avenues to playfully skew, when it’s time to wrap the film bogs in plot mechanics.  Still, even here there are giggles to be had as our protagonists must pause for the curse of La Dora, that stolen dagger, to be translated by an over enunciating Spanish teacher (Maria Sager).