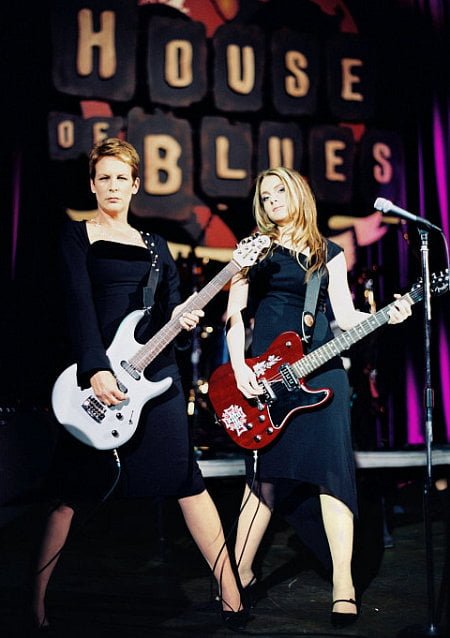 Anna Coleman (Lindsay Lohan, "The Parent Trap") thinks her mother is remarrying too soon after her father's death. To make matters worse, her band, Pink Slip, has just been granted the opportunity of a lifetime - an audition at The House of Blues - the next day, the Friday of her mother's wedding rehearsal dinner. When the matriarch of a Chinese restaurant sees the two arguing about their individual responsibilities, she puts a spell on them so that they can experience life through each other's eyes and gain understanding. The next morning they awake and realize they're in for one "Freaky Friday."

The Turtles' "Happy Together" segues into a punk version as mom goes through the daily ritual of tearing daughter Anna from her slumber, a nice musical motif for mother and daughter in Disney's remake of its 1976 Barbara Harris/Jodie Foster starrer. Leslie Dixon ("Pay It Forward") and Heather Hach update the screenplay with the alternative music scene, a single mom's upcoming nuptials and a very bewildered budding love interest for Anna. Tess Coleman (Jamie Lee Curtis) is a straight-laced psychiatrist who is currently caught up in planning her wedding. She views her daughter as an underachiever who fobs off responsibility for her failures on others, although she tries to make time to 'understand' and is relatively supportive of Anna's garage band. Anna is a pretty good rocker (she plays her dad's old Telocaster) with an English teacher, Mr. Bates (Stephen Tobolowsky, "Memento") who is unreasonably hard on her and a pesky little brother Harry (Ryan Malgarini) who is always trying to make her look bad. She sees her mother as square and self-absorbed, but she's a decent kid with a shy crush on the older, Ducati-riding Jake (Chad Michael Murray, TV's "Dawson's Creek"). Tess's dad (Harold Gould, "Stuart Little") lives with them, providing a father figure to Harry, although he's too out of touch to have much impact on his granddaughter's world. Tess's fiance Ryan (Mark Harmon, "Summer School") is trying to forge a relationship with her children without letting them take advantage of the situation, but mostly he's a bit lost trying to fit in. Of course, once Tess and Anna change places they discover that the other doesn't really have it all that easy once the initial pleasures (french fries for Tess, credit cards for Anna) have been indulged. Anna must listen to a litany of patient woes and panic at appointments for root canals while Tess gets bullied at school and sets Bates straight. Surprisingly, after setting Harry up as a torturous brat, rather than Tess learning that her son's an instigator, Anna finds out how much he really looks up to her at a parent/teacher conference (this after she's bound his head in his own underwear the day before). The film has the most fun with the Jake conundrum, as he suddenly finds himself yearning for the mother of his former dream girl. Lee Curtis does some great physical comedy, rolling over a couch to avoid a kiss from Ryan and body surfing through a television interview she's turned into a mosh pit. She's good capturing the shy simpering of puppy love with Jake, but often her Anna-isms are too broadly juvenile. Some of this problem can be attributed to a script which has Anna, surely old enough to role play her mom, squealing over credit cards in her own bag as she sits next to Ryan in the car. Lohan affects a maternal air, indignant at behavior directed at teens while yanking down on her chums' midriff baring tops. Lohan's also good doing her own singing (as does bandmate/lead singer Christina Vidal) and rocking out. Michael Murray has nice screen presence as the confused love interest. Director Mark S. Waters has a bad ("Head Over Heels") and mediocre ("The House of Yes") movie to his credit and makes a step up here, also showing a wide genre range from romantic comedy/thriller to dark indie to family remake. "Freaky Friday" is a fun family film, with all generations' foibles presented in equal measure.

Dr. Tess Coleman (Jamie Lee Curtis) and her 15-year old daughter Anna (Lindsay Lohman), like many modern mothers and daughters, do not see eye to eye. Widowed mom is getting remarried and wants Anna to accept her fiancé Ryan (Mark Harmon). Anna is a budding rock musician and seeks her mom's support for her aspirations. When the two bicker at a Chinese restaurant, the owner's mother slips them a pair of identical fortune cookies and they soon learn that they are in for one "Freaky Friday." Tess and Anna open the cookies and read the prophetic fortunes that say, essentially, you'll know how another person feels only if you walk a mile in their shoes. The room shakes like an earthquake has hit it, but just only Tess and Anna seem to notice. They ignore the strange event - until the next morning when Tess wakes up, looks into the mirror and sees...Anna! She races to her daughter's room to find out that Anna now inhabits her body! With Tess's wedding rehearsal dinner that evening and the nuptials set for the next day, Saturday, the Coleman ladies must do some fast thinking to put things straight. Mary Rodgers's popular 1972 children's book was first brought to the screen in its first film adaptation, the 1976 Disney comedy starring Barbara Harris and young Jodi Foster as the mother and daughter in conflict. "Freaky Friday" was made a second time, for the small screen, in a 1995 version. Now, Mark S. Waters helms the latest version, again for the Mouse House, with an updated screenplay by Heather Hach and Leslie Dixon that has Tess a single working mom and Anna a member of a garage band. This is a bit of lightweight but entertaining summer fare that benefits from a good pairing of Curtis and Lohman. The role exchange between the two is handled in a charming way as Lohman must convince us that she is the anal retentive Tess who must, until they can figure out a way to change things back, take her daughter's place for an all-important exam. Anna, given a wallet full of money and credit cards, must replace Tess at her psychiatric practice, but not before a shopping spree. Typically, Tess and Anna have to cope with the other's problems and responsibilities without causing too much havoc. Anna has to take her mom's place as she sees Tess's patients and, against her mother's admonishment, puts in her two cents in their treatment. When one patient, a mother, tells Anna that she has been reading her daughter's diary - for her own good the mom says - the teenager in the woman's body is incensed and sets the mother straight on teen girl behavior. There is also an amusing sequence when Anna-Tess must appear on a TV talk show to shill Tess's book. Jamie Lee Curtis does a wonderfully funny and physical job of portraying a teen trapped in a mature woman's body - "I'm like the crypt keeper!" - Anna bemoans when she sees her mother's face in the mirror. She plays it broadly juvenile but it is a fun performance. Tess-Anna, on the other hand, has to cope with being a teen in the 21st Century. When she takes the big exam for Anna, what she thought would be a piece of cake turns into something akin to reading Greek. She also has to cope with a jealous ex-girlfriend and a handsome, Ducati motorcycle riding guy named Jake (Chad Murray) whom Anna harbors a huge crush for. The whole school environment has changed from when Tess was a kid and she develops a newfound understanding and respect for her daughter. Lohman does the little details nicely, like when she absent-mindedly adjusts her girlfriend's clothes to be more demure. The supporting cast is background only, for the most part, but little Ryan Malgarini, as Anna's diminutive brother Harry, gets some of the best laughs after the stars. The rest, including Mark Harmon as Tess's fiancé, do yeoman's work but are unremarkable. Techs are OK but the main draw is to watch Curtis and Lohman do their thing. "Freaky Friday" covers the required bases with the setup of the conflict between mother and daughter, the shattering exchange of bodies and the eventual understanding that develops as each is enlightened about the other. It's lighthearted summer fun and nothing gets blown up and no one gets shot.