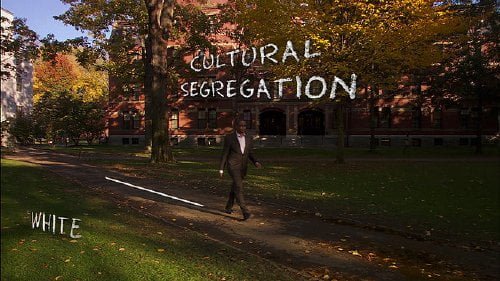 Inspired by the best-seller Freakonomics: A Rogue Economist Explores the Hidden Side of Everything, by Steven D. Levitt and Stephen J. Dubner, “Jesus Camp” directors Heidi Ewing and Rachel Grady and four other acclaimed documentary filmmakers assemble to examine working-class underachievers and their response to working hard – for cash, the effect that a name can have on a person’s life, why crime suddenly began to drop in 1989 and corruption in the Sumo wrestling world in “Freakonomics.”

In 2005, economists Steven Levitt and Stephen Dubner's book "Freakonomics: A Rogue Economist Explores the Hidden Side of Everything" was published. Now, five years later, prominent documentarians divvy up four different chapters of the book while "King of Kong" director Seth Gordon pulls their shorts together with smaller pieces of his own in the film version, "Freakonomics." There are some big name documentarians at play here, but while the resulting film is often entertaining, it's also random, it's ideas not well articulated. Only Eugene Jarecki's animated "It's Not Always a Wonderful Life" segment, along with Gordon's smaller doodles, really make salient points. Not having read the source material, it's unclear to me whether the authors or the filmmakers are to blame. The lisping Levitt and his partner Dubner are an entertaining and jovial pair as seen in Gordon's connective interview bits. As a segue into the last short film, "Jesus Camp" directors Heidi Ewing and Rachel Grady's "Can a Ninth Grader Be Bribed to Succeed?," Gordon produces a simple animation of Levitt's anecdote about how his three year old outsmarted his potty training incentive plan within three days. It's short and to the point. The longer film on the same subject comes to no real conclusion. The most entertaining of the four shorts is Morgan Spurlock's ("Super Size Me") "A Roshanda by Any Other Name," which examines what makes names popular, whether what one is named impacts one's life and the difference between 'white' American names and the more unique African American names which began to spring up in the late 60's (Unique, itself, being one of them that can be found in over 200 different spelling iterations). It's a cute piece, but the conclusion it draws is backwards from the question it set out to answer. The most muddled piece comes from perhaps the filmmaker with the most impressive filmography. Alex Gibney's ("No End in Sight," "Taxi to the Dark Side," "Gonzo") "Pure Corruption" looks into how sumo wrestling is such a revered sport, tied to Shinto rite as it is, in Japan, that the public couldn't conceive of matches being fixed. Au contraire, says Levitt, one need only look at statistics to see the pattern. This is all well and good, but then an attempt is made to connect sumo wrestling corruption to what happened on Wall St and the analogy is tenuous at best (as if anyone would consider investment bankers pure and incorruptible).

The film is divided into chapters with filmmakers Morgan Spurlock, Alex Gibney Eugene Jarecki, Seth Gordon, Ewing and Grady taking on the main points of the Levitt/Dubner book. Spurlock’s segment, “A Roshanda by Any Other Name,” examines, with various talking head interviews, how the given name can affect one’s life and how others perceive him or her. As with each chapter, stats upon stats are trotted out to show that a name, really, does not affect a person’s destiny. Or, does it? The answer is wrapped in ambiguity. “Pure Corruption,” by Alex Gibney, delves into what is considered the purest sport – Sumo wrestling. Essentially, if there is an incentive to cheat, no matter what the sport or game, someone will. Economist Levitt staggers the viewer with fact upon fact that Sumo wrestlers, deny it or not, do cheat. The cause and effect chapter, “It’s Not Always a Wonderful Life,” by Eugene Jarecki, looks at the sudden, steady drop in violent crime starting in 1989. The economist, Levitt, attributes this phenomenon not because of increased law enforcement, higher conviction rates in the courts or the fall of the crack market, but to the 1973 Supreme Court case, Roe v. Wade. Again, mountains of stats make the case. This is the most enlightening of the segments. Ewing and Grady, with “Can a Ninth Grader Be Bribed to Succeed?” follow a University of Chicago study that financed one Windy City school system to provide cold, hard cash to failing students to make the grade. Get a C or better in all your classes and you can take away a cool $50 a month, plus take part in a lottery for an additional $500 and a ride in a stretch limo. Again, facts abound but the conclusion is, some ninth graders do succeed when bribed while others do not. What is the conclusion of the study? We have to start bribing when kids are pre-school. The best part of “Freakonomics,” though, is not one of these mildly interesting chapters, but the bridges and transitions in between segments. Seth Gordon has authors Levitt and Gordon discussing the aforementioned issues and, as the book’s title says, everything else. These connecting pieces say so much in very little time and are a pleasure. “Freakonomics” is an interesting, uneven mountain of stats and facts that, overall, is inconclusive. Life goes on.