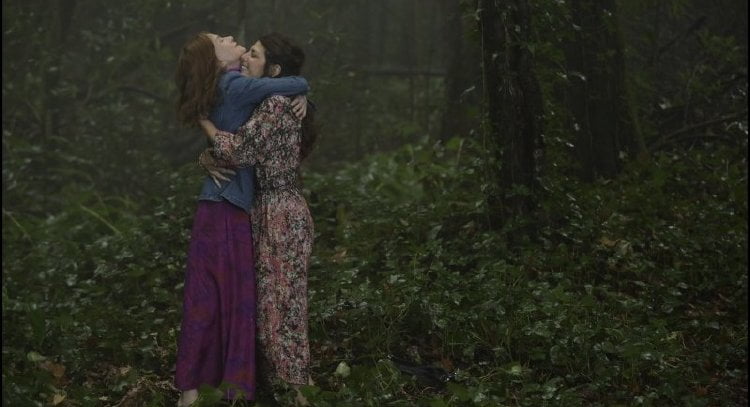 Matriarch Francoise Cremont (Isabelle Huppert) and her family are vacationing in Sintra, Portugal, a land of fairytale-like castles and villas. But, the idyll of this land will not last when she breaks devastating news with the hope that it will heal the old wounds in their lives without “Frankie.”

International actress Françoise Crémont (Isabelle Huppert) made headlines for beating cancer, but unbeknownst to her fans, it has returned and spread. The family matriarch gathers together her extended family of multiple marriages for a vacation in Portugal’s Sintra hoping to create memories and settle affairs. She surprises them by also having invited a friend, hairstylist Ilene (Marisa Tomei), hoping to pair her with her rootless son Paul (Jérémie Renier). When Ilene shows up from a Spanish Star Wars set with d.p. Gary (Greg Kinnear), the best laid plans go awry for “Frankie.”

Cowriter (with Mauricio Zacharias)/director Ira Sachs’ ("Love Is Strange") filmography is made up of films focusing on relationships and families, his most recent all set in New York City. With his first film set abroad, Sachs continues to examine the intricacies of human connection, but the move from an urban setting to a world heritage site appears to have upset his ability to block a scene. “Frankie” consists of a series of two or three people awkwardly standing outside talking in the most unnatural way possible interspersed with characters walking, apparently in circles as they keep running into one another. The only scenes which feel natural are the few set indoors. The film’s only real saving graces are a couple of scenes between Huppert and Brendon Gleeson, who plays her devastated husband Jimmy, and a moment of realization in its closing minutes.

There is a feeling of disconnection throughout. Frankie, her son and her stepdaughter all seem to have different ideas about inheritance (was I hearing things, or did Huppert first call Frankie’s stepdaughter Sylvia (Vinnette Robinson) ‘Vinnie,’ the actress’s real name?). Frankie’s step-granddaughter Maya (Sennia Nanua, "The Girl with All the Gifts") heads off to the beach for the day so Sachs can dabble in Éric Rohmer territory. Frankie is joined by her husband as she plays Schubert's Moments Musicaux, D 780, Op. 94, No. 2, then announces she’s going for a walk (again!) and is waylaid by a fan inviting her to a stranger’s birthday party. Sylvia considers leaving her husband Ian (Ariyon Bakare) and Ilene breaks up with Gary when he proposes. Frankie’s ex, Michel (Pascal Greggory), wanders about with guide Tiago (Carloto Cotta, "Diamantino"), to little dramatic purpose. We learn that Michel is gay and that Frankie never realized it during their marriage. Sprinkled here and there are little moments of truth.

While Frankie expresses exasperation with her husband Jimmy’s moping (he tells Michel that ‘there is no post-Frankie’), the couple share a moving moment of naked intimacy. There is really nothing to make us care about any of the other characters, at least until Frankie makes an observation as they all gather on a hillside, she and two others framed within her ex-husband’s binoculars.

Ira Sachs, who directs and co-writes, with Mauricio Zacharias, “Frankie” is an established New York City filmmaker with such works as “Little Men (2016)” and “Love Is Strange (2014).” He has made forays elsewhere but, this, I think, is his first to travel to more exotic lands than the boroughs of NY. I get the feeling, watching his latest tome, that he was not entirely comfortable away from the city, any city, and Sintra, while lovely, is not used effectively.

The story begins with international film star Frankie gathering her family and friends in the Portuguese city for what seems to be a pleasant vacation. Things unfolds mainly with characters, alone or in pairs, wandering around the woods of Sintra, sometimes stopping to carry on long stagey conversations about life and death, happiness and sadness, good and bad, etc.

The impression I get from Ira Sachs’s relocation to Portugal is that the filmmaker did not know what to do with his location. As I said, much of the runtime has people walking in the woods and, when they stop to interact with each other, you can see the actors looking for their placement marks. And, the grand revelation about Frankie is neither grand nor revealing as everyone seems to already know her news.

After watching “Frankie,” I keep comparing it to Asghar Farhadi’s 2018 film, “Everybody Knows,” a story about a family also gathering in an exotic Iberian locale. Both of these films suffer from the same thing: the filmmaker is out of his comfortable element. The result is less than compelling.