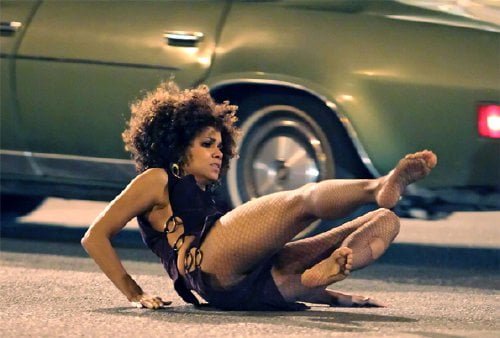 Frankie Murdoch (Halle Berry) is a cage dancer in 1974 L.A. who knows how to work club clients. But when she goes home with one of them, the sight of a child's toy, left behind in the single dad's apartment, makes her go all religious on him. Brought into a hospital after having run out into traffic, Frankie's treated by Dr. Oz (Stellan Skarsgård, "Mamma Mia!"), who, intrigued by the pretty young woman others dismiss as a druggie, finds that his patient is divided between "Frankie & Alice."

Hmmm...the director of "White Noise" (Geoffrey Sax), a screenplay attributed to six writers (and two additional 'story bys' for a tale based on truth) - not a good sign, but the subject matter, multiple personality disorder must have been Oscar bait to former winner Halle Berry. But Berry's transformations between Frankie and the small, breathy child who emerges under hypnosis, and that child and Alice, a wealthy, racist white woman(!), come across as borderline silly due to the sensationalistic treatment given this tawdry film. After getting fired from the club she works at, Frankie's caught between owing rent and wondering at the pricey clothes from a Beverly Hills boutique she finds in her closet. During a Sunday dinner with momma (Phylicia Rashad, TV's 'Cosby Show,' "For Colored Girls"), Frankie's taunted by younger sister Maxine (Chandra Wilson, TV's 'Grey's Anatomy') about the upcoming marriage of her 'best friend' Paige Prescott. It's clear truths are being suppressed in the Murdoch home, as mama Edna glares at Maxine while softly glowing at Frankie's tales of working for the phone company. Most of the drama takes place in Oz's office, though, where Sax 'builds suspense' by dropping different behaviors of Frankie's while we await Oz's 'aha!' moment. She's right handed, then left; she smokes, then abhors it. Well, forgive Dr. Oz for taking his time as it's two years before 'Sybil' first aired on TV, but thankfully he has a radio in his office that conveniently does air a song which induces a flashback. The young interracial love story which plays out ends tragically, but just like "Sybil" it's mama who's the root of all evil. There is some nominal effort to forge a friendship between doctor and patient (Frankie predicts Oz is the type who buys a tuna sandwich on his way home, only for Oz to be presented with a variety of sandwiches and...choose the tuna!) and Skarsgård maintains a calmness that makes us wonder what he's doing here. As Frankie Berry acts the extreme seductress crossed with a young woman looking for her mother's approval (of which the latter makes little sense given the over the top trauma revealed at film's climax). She employs an earnest, childish whisper to effect the little girl who provides Oz with a gateway to Alice, whom Halle invests with high haughtiness (and an apparent inability to see her own reflection in the mirror). This lurid story needed a much stronger director than Sax to see it through. His visuals have the quality of a dingy version of a cheesy 70's television series, which, given the overall impact of his film, is apt.