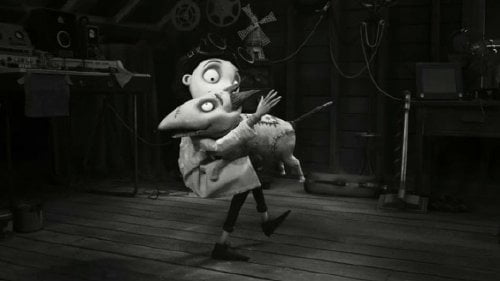 Victor Frankenstein's (voice of Charlie Tahan) class is excited and competitive about their upcoming science fair, especially when rumors start to circulate about Victor's project. Having recently been heartbroken by the accidental death of his beloved dog Sparky, Victor is inspired by his teacher's electronic manipulation of a dead frog's tissue and, with the help of a needle, thread and lightning storm, succeeds in bringing Sparky back to life in "Frankenweenie."

Back in 1984 when he worked for Disney Studios as an animator on such films as "The Black Cauldron," Tim Burton created a black and white half hour live action short called "Frankenweenie" about a boy who reanimated his dog. It was signature Burton, the auteur's style already coming into sharp focus, but Disney had no idea what to make of it (and, in fact, fired him). Now, almost three decades later, it's ironic that it's Disney who is backing Burton's feature length version of his early short, still in black and white. The stop motion animation uses 3D to pull us further into Burton's gothic blend of innocence and horror and screenwriter John August ("Big Fish," "Dark Shadows"), adapting the short's screenplay with Burton's characters and story, branches out from the original's "Frankenstein" influence to encompass more horror icons of Burton's childhood years. Victor's class in New Holland high school consists of some very odd looking kids. Nassor (voice of Martin Short, "Mars Attacks!") looks like Frankenstein's monster, Edgar 'E' Gore (voice of Atticus Shaffer, TV's 'The Middle') his assistant ('E' Gore, get it?) and Toshiaki (voice of James Hiroyuki Liao, " Battle Los Angeles") represents the Japanese atomic influence. Elsa Van Helsing (voice of Winona Ryder, "Edward Scissorhands")) is a sophisticated Goth with a poodle, Persephone, who plays with Sparky and the perpetually startled looking Weird Girl (voice of Catherine O'Hara) makes odd pronouncements and divines the future via her beloved cat Mr. Whiskers's litter box. Their science teacher, Mr. Rzykruski (voice of Martin Landau, "Ed Wood"), is beloved by all, but the class's parents find him too extreme and he's let go just when his presence would have really, really helped. On the fateful day everything begins, Weird Girl shows Victor a V-shaped turd and says Mr. Whiskers has 'told her' that something important will happen to him today. Urged by his father, who worries that his son spends too much time alone in the attic, Victor plays baseball, but when a ball gets hit into the street, Sparky goes after it. He doesn't make it back. The class begins to panic about their projects and Edgar won't leave Victor alone, wanting to partner up with him. It's Edgar who first realizes a sewn-together Sparky lives and he can't keep quiet, despite promises. Soon everyone's making trips to the pet cemetary, but everyone else's experiments go very awry right on the eve of the New Holland Dutch Day Celebration. Burton's strength has always been art direction and "Frankenweenie" is a gorgeous evocation of his sensibilities. Victor is the dark eyed loner, Sparky a lovable bull terrier in both his incarnations. It's easy to see visual cues to other Burton pics, like the neighborhood of homogeneous ranch houses from "Edward Scissorhands" and the sculpting prowess of that character in Persephone's grooming (she gets a shock which turns her into the canine version of her owner's namesake's famous bride). There is also the strong echo of Burton's other b&w short 'Victor,' and Toshiaki's sea monkeys, turned by Bob (voice of Robert Capron) into Gremlin-like monsters, share DNA with Burton's Martians. Pee Wee's bicycle powers Victor's lab and the climatic fairgrounds were once the playthings of Beetlejuice. Danny Elfman's score features the celestial chorales of his "Scissorhands" work. But the film shares the faults of this year's earlier Halloween-themed stop motion movie "ParaNorman" in that the story feels stretched and repetitious - there's too much of the same, although at least Burton gives us various renditions, rampaging monsters who bear the stamp of their creators. The original short, which this animated version is incredibly faithful to down to the tiniest details, is more economical story telling, purer. What this "Frankenweenie" does have in spades is heart, even as its boy and his dead dog story circumvents the morals of a monkey's paw.