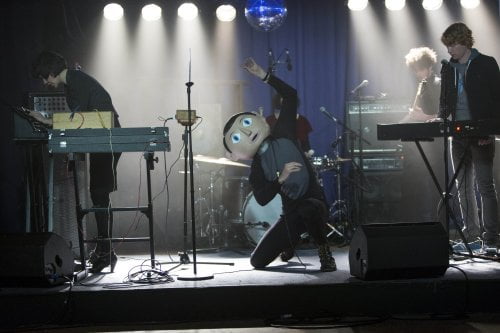 Jon (Domhnall Gleeson) is an aspiring musician who has dreams of song writing fame. When a band, Soronprfbs, plays in town, they lose their keyboard player, Jon jumps at the chance to play a gig on stage. He is not ready, though, for the band’s enigmatic leader, “Frank.”

Jon (Domhnall Gleeson) lives a dull life in an Irish seaside village. He fancies himself a songwriter, recording doodles on his keyboard in his bedroom in his parents house. When The Soronprfbs pull into town, Jon witnesses the band's keyboardist trying to drown himself in the ocean. Mentioning offhandedly but hopefully that he plays the same instrument to the band's manager Don (Scoot McNairy, AMC's 'Halt and Catch Fire'), he's amazed to find himself on stage that very night, mesmerized by the talented lead singer, who never takes off the huge, round paper mache head that further distinguishes "Frank." This Sundance hit, based on screenwriter Jon Ronson's memoir (he was the keyboardist for Frank Sidebottom, the real life inspiration for the fictional character), is a funny, goofy movie with some serious things to say about art and madness, band dynamics, broken dreams and selling out. Irish director Lenny Abrahamson has accomplished some kind of demented coup in getting one of cinema's studliest leading men, Michael Fassbender ("12 Years a Slave"), to don a round, painted head and sing for his supper. With offbeat original music by Stephen Rennicks, The Soronprfbs are an art pop band that could pack clubs in real life. Jon's first experience with the band is disastrous, the antagonistic and possessive (of Frank) synth/theremin player Clara (Maggie Gyllenhaal, "The Dark Knight") pulling the plug less than a minute into the show. Bereft, Jon is surprised to receive a call from Don saying that Frank had found him 'cherishable' and could he meet them. Expecting to head for another gig, Jon's dumbfounded to learn he's been taken to a lake cabin where the band expects to record an album. As Jon struggles with his inane songs, Frank can create 'Long Standing Tuft,' an ode to a stray carpet fiber, on the fly. And yet Frank, though temperamental, is wonderfully kind and supportive of Jon while the rest of the band treat him as an interloper. And then the German tourists who've rented the cabin because Don's gone through all their money show up. Frank charms the Germans and Jon offers his nest egg to continue recording. One Viking funeral(!) later and Clara discovers Jon, who is a social media enthusiast (his tweets pop up on screen), has posted videos of the band on Youtube that have resulted in an invitation to the SXSW music festival. Frank is enthralled by the thought of being 'known' but Clara, drummer Nana (Jack White drummer Carla Azar) and French speaking bassist Baraque (Francois Civil) know something Jon doesn't about the true nature of Frank's genius. Frank, swayed by the idea of newfound popularity, embraces Jon's push towards more 'likable' music and the rest of the band quit before they take the stage. (Jon later finds them performing in an empty hall, their deadpan rendition of 'On Top of Old Smokey' miles better than his original compositions.) The Frank and Jon duo prove disastrous. Yes, we eventually see Fassbender's face, but he's incredible as the man behind the mask, relying on body movement (his first performance recalls Ian Curtis's pumped marching-in-place) and vocal timber. This was an out there role for an actor of his stature to take and he runs with it (literally, sometimes bumping into things). Gyllenhaal, who learned to play the synthesizer and theremin for her part, is also on point as the artist as emotional terrorist. Gleeson provides the Every Man's point of view into the madness, a man with no talent trying to wish it into existence. The film is a lot of fun, with themes that lend it melancholy. Abrahamson and his writers only failure is a soft landing, an ending which implies that true artistry and commercial success cannot coexist. If a soundtrack CD is made available, they may find out otherwise (the single, 'I Love You All,' is available to purchase as an mp3).

Frank (Michael Fassbinder) is the creative genius behind his band but he has one tiny quirk – he wears a giant fiberglass head all the time, on and off stage. And, his alternative music is even outside the realm of alternative music. Still, the band has a following and they are on the verge of recording an album, until the money runs out. In steps Jon, who volunteers his small fortune, expecting to have it all done in a couple of weeks. Eleven months later, they are at the same point with nothing recorded and Jon’s funds dwindle to nothing. “Frank,” by director Lenny Abrahamson and scripters Jon Ronson and Peter Straughan, is loosely inspired by the life of cult musician Frank Sidebottom who created on-stage persona much like title character in the film. The filmmakers, though, takes his story and introduces a big dose of oddball quirkiness in the character Frank, a very troubled soul who never removes his faux head for reasons his own. He is an erratic personality kept under control by his muse/jailer Clara (Maggie Gyllenhaal). She resents Jon’s influence on Frank and makes it known, sometime physically, that she is the one in charge. The gimmick of the giant head, at first, seemed to be just that – a gimmick that would grow tired. But, Michael Fassbindeer, as Frank, makes the character quite sympathetic and, strangely, likable. You wonder, just like Jon, why the big head? Frank’s band mate Dan (Scoot McNairy) sums it up best early on for the confused newcomer:”Just go with it.” And, you do. As the story unfolds the depth of the characters grow and I began to feel like I belonged with these crazy guys.