Frank Miller's Sin City: A Dame to Kill For 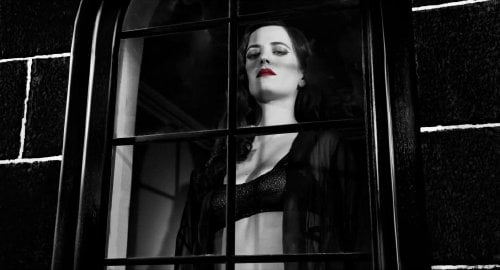 It has been nine years since Robert Rodriguez and Frank Miller collaborated on the adaptation of Miller’s Sin City graphic novels. They return to the titular city with old characters, new characters and the same funky photography and violence in “Sin City: A Dame to Kill For.”

Nine years after first visiting (codirector) Frank Miller's graphic pulp novel Sin City, Robert Rodriguez and much of his cast returns for four new stories, the central one a prequel explaining just what happened to Dwight McCarthy's (originally played by Clive Owen, here by Josh Brolin) face in "Frank Miller's Sin City: A Dame to Kill For." This time around, in addition to objectifying woman and replacing cinematic art with green screened digital recreations and homages to art deco noir, Rodriguez adds 3D to his mix but it's really just more of the same. As before there are some sumptuous images, most notably of femme fatale Ava Lord (Eva Green, "300: Rise of an Empire") nude on a diving board backed by a full moon, but outside of Green's campy vamping few of the actors make much of a mark. One who does is Mickey Rourke, whose Marv was the highlight of the first film. He's one of the few that can spin Miller's pulpy dialogue into something lifelike ('I was born at night but it wasn't last night') and he kicks off the film in "Just Another Saturday Night," in which he saves a wino from a bunch of sadistic frat boys. One of Rodriguez's most inspired visualizations features a car chase orbiting around a pensive Marv, like the propeller plane circling the globe in the old Universal Studios logo. "The Long, Bad Night," a piece Miller wrote specifically for the film, features cocky Johnny (Joseph Gordon-Levitt) riding into town in a Corvette to take on Sin City's most notorious villain, Senator Roark (Powers Boothe, a franchise MVP), in a poker game. Making a silver dollar disappear and reappear, he gains Lady Luck in the form of hooker-with-a-heart-of-gold Marcie (Julia Garner, "We Are What We Are"), but when his claim that he never loses proves true, his patronage proves a miserable fate for her. (Although the film is mostly black and white, Rodriguez adds pops of color, usually gracing the female characters - Marcie is completely in color.) "A Dame to Kill For" finds P.I. Dwight saving the fickle mistress (Juno Temple) of another Sin City creep (Ray Liotta) before falling for the lure of his own ex Ava. Arriving in a blue satin trench and ruby red lips, Ava, now married to one of the richest men in town, reels Dwight into her own "Double Indemnity," aided by adoring manservant Manute (Dennis Haysbert, replacing the late Michael Clarke Duncan). Green's almost entirely the reason to see the film and her Charlotte Rampling eyed seductress is so delectably sensual, one wishes she could time travel back into a vintage film noir. Dwight's set up pulls in honest cop Mort (Christopher Meloni) and his cautionary sidekick Bob (an amusing Jeremy Piven), but Mort's no match for Lord and it takes the pairing of Dwight and Marv with an assist from Gail (Rosario Dawson) and her Old Town prostitutes to serve justice. (Miho's also been recast, now employing "Sucker Punch's" Jamie Chung to deploy "Kill Bill" swordplay.) Throughout the film, we always return to Kadie's Club Pecos, where Nancy Callahan (Jessica Alba) infuses her pole dancing with guns and alcohol in a long, slow breakdown since the death of her white knight Hartigan (Bruce Willis, whose ghostly presence hangs about with little payoff). "Nancy's Last Dance" is one story too many though and by this point, I frankly couldn't have cared less. The film also features Christopher Lloyd as a grin and flinch inducing back alley doctor and Lady Gaga as Bertha, a sympathetic diner waitress. "Sin City: A Dame to Kill For" is more of a pictorial companion piece to a graphic novel than a movie, leading one to wonder why Miller doesn't just employ Rodriguez as a photographic panel artist - all we'd be missing is Green's gravelly purr.

There are two kinds of people: the ones that love, love, love the original “Sin City” and the ones who say “meh.” I am in the latter category so, up front, I am the wrong person to review “Sin City: A Dame to Kill For” for its fans. So, let me tell you how I feel about it. I did not need to waste two hours of my precious life for a F/X rehash of a nine year old movie (technology HAS progressed substantially since 2004 so why the same thing now?) with its stick figure characters. But, there is a little bit of silver lining in “Dame,” Eva Green as fatal femme fatale Mrs. Ava Bond vamps it up to the max, using her body and sensuality as a sledgehammer to get her sometime murderous ways. And, Powers Boothe as the corrupt politico Senator Roark is a creepy, ruthless bad guy whose evil glint in his eyes is chilling. Mickey Rourke is, once again, amusing as the 300 pound, menacing Marv. The rest of the veteran cast is OK if only two-dimensional – in a film shown in 3D, which is not required. If you must see it, save a few bucks and see it in 2D and buy yourself a snack with the savings.