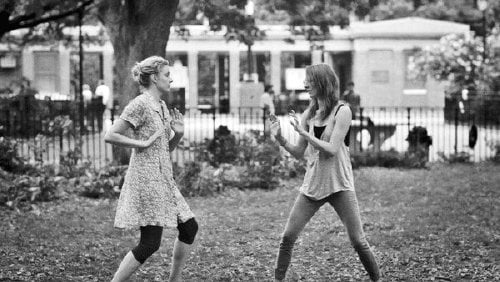 Frances (Greta Gerwig, "Damsels in Distress") and her Brooklyn roommate (Sting's daughter, Mickey Sumner) are such soul sisters Frances says they're 'like an old lesbian couple who no longer have sex.' In fact, Frances is so attached to Sophie, she breaks up with her boyfriend when he asks her to move in with him. She's thrown for a loop when Sophie tells her she's moving into her 'dream apartment' in TriBeCa with Lisa and Frances, who cannot afford much with her tenuous position at a small modern dance company, begins to drift in "Frances Ha."

Cowriter (with star Greta Gerwig)/director Noah Baumbach switches gears with his latest muse (his last film, "Greenberg," was cowritten with then wife Jennifer Jason-Leigh and costarred Gerwig), leaving behind his usual dark protagonists for one full of light. The film shows many influences, from Woody Allen (white titles on black backgrounds, New York City shot in glorious black and white) to Leos Carax (Gerwig dances through the streets to David Bowie's 'Modern Love,' just like Denis Lavant in "Mauvais Sang"). "Frances Ha" is like an early Andrew Bujalski movie with more articulate characters or Lena Dunham's 'Girls' without the ick factor. Gerwig has never been better, at ease wearing Frances' awkward, socially challenged charm. Female friendship isn't often the subject of a film, and Gerwig and Sumner capture the closeness of two people who share everything. The film begins with a montage of them spending a day, having a picnic, a mock physical fight, sharing a bed ('No socks!'). In a very short amount of run time, we know this relationship so well we're just as shocked as Frances when Sophie makes her announcement. Sophie works a white collar job in publishing and has a Wall St. boyfriend, Patch (Patrick Heusinger), so her move leaves Frances not only in personal, but financial crisis. Then a tax return arrives and on a whim, she calls Lev (Adam Driver, HBO's 'Girls'), a friend of Sophie's who'd asked for her number, inviting him to celebratory dinner. Back at his and roommate Benji's (Michael Zegen, HBO's 'Boardwalk Empire') apartment, she's offered their soon-to-be-vacated, rentable couch. Like Frances, both of these guys aspire to the arts, Lev a sculptor, Benji writing skits for 'SNL,' but unlike her, they have inherited wealth to float their aspirations on. Frances is happy here until she's dealt a double blow - her expected Christmas job disappears and she has a major falling out with Sophie when she learns Sophie and Patch are flying off to the Galapagos. The first half of the film is full of character driven humor, whereas the second half charts Frances' downward drift. She flies home to Sacramento (Gerwig's real life home) to spend the holidays with her parents (again, Gerwig's). When she returns to New York City, everything that looks promising goes disastrously wrong until she ends up a 27 year-old working a Vassar summer job for room and board in the dorms. And then it happens again. The movie is comprised of Frances moving from one place to another, each new address announced via stark title card, as her life remains in a state of chaotic statis. The film's buoyant ending feels a bit unearned, good fortune having appeared with no groundwork, but Gerwig is so enchanting and the film so lush to look at (cinematography by Sam Levy) that it's insignificant. Frances is an eternal optimist, so even if the script fluffs over the details, the character has earned happiness. And that final moment, when Frances experiences what she has defined for a dinner party as the essence of what she wants out of life, is a relatable moment of shared joy.