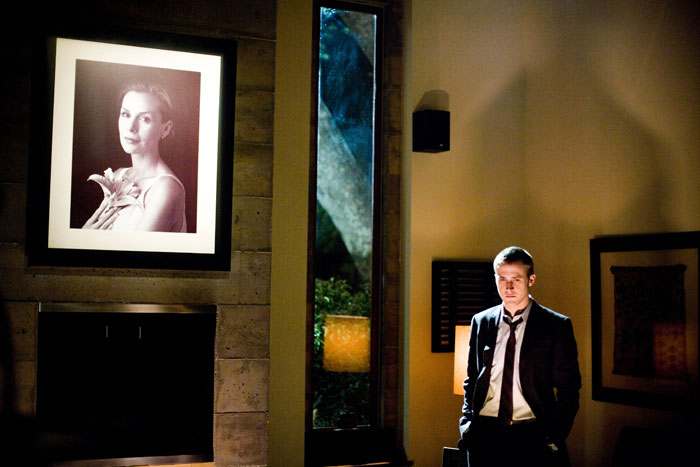 When he was a boy on his grandfather's farm, Ted Crawford (Anthony Hopkins) examined 300 eggs and determined that each and every one had some kind of flaw. As a wealthy older man, Ted discovers his young wife is having an affair and so he not only shoots her, but admits his guilt to the police. Assistant DA Willy Beachum (Ryan Gosling, "Half Nelson) has a 97% success rate and a case seemingly handed to him on a platter, but Willy will learn what Ted already knows and has engineered - that everything has a 'Fracture."

The slick thriller directed by Gregory Hoblit ("Fallen," "Frequency") and starring a younger and older actor both in their primes is both served well and robbed by a script (Glenn Gers and Daniel Pyne, "The Manchurian Candidate" remake) that gives the actors chewy dialogue but a weak story structure. The mystery of Ted's 'perfect' crime which provides the film's final twist was screamingly obvious to this viewer, but those who do not spot it should have a very good time. Those who do can entertain themselves watching Hopkins and Gosling entertain themselves. The film begins by following Ted on the afternoon of the crime. He leaves work early and spies on his wife and her lover at a hotel. When she arrives home they talk, he accuses, then he shoots Jennifer (Embeth Davidtz, "Fallen," "Junebug") in the head. He fires several more shots, scaring away his curious gardener and sets the crime scene. The hostage negotiator who shows up is Lt. Rob Nunally (Billy Burke, "Ladder 49"), none other than Jennifer's lover, who has no idea what he is walking into, not having know her address or last name despite the seriousness of their relationship. Nunally secures a confession and warns the assistant DA that the perpetrator is wily, but neglects to come clean about his own relationship to the Crawfords. Willy gets involved in the case during his last week in the DA's office, having weaseled his way into a highly profitable corporate position. He thinks he is just walking into a one time court appearance before handing off the case, but his ego, his curiosity and his outright seduction by the defendant reel him in before he discovers that the gun at the scene, the defendant's, has never been fired and the murder weapon cannot be located. Then Crawford, who has elected to defend himself but who has not attempted any cross examination or objection of the prosecution, finally objects when Nunally is on the stand using brutal layman's terms for the lieutenant's relationship with the victim. The case becomes a circus and Willy is in a trap - if he proceeds and loses he will lose both his old and his new job. Watching Hopkins alternatively taunt and lure Gosling as the younger actor, both amused and bemused, lets his overconfidence get the better of him, provides most of the fun to be had here. There's lots of snappy dialogue - a courtroom judge (Xander Berkeley, "North Country") tweaking Beachum's appearance in a tux, Hopkins's plummy chumminess ('Old Sport') and sexually suggestive irreverence masquerading as innocence of the law, Gosling's brash explanation of how he procured his new position - but in addition to the transparent twist, the screenwriters borrow rather too obviously from "The Silence of the Lambs" (Ted's sarcastic review of Beachum's background is Lecter's taunting of Clarice redux) and strain with their corporate subplot. Beachum falls too easily into his new boss's (Rosamund Pike, "Pride & Prejudice") bed and her Nikki Gardner character is never more than a symbol of corporate sellout. Nikki's liberal father (Bob Gunton, "I Heart Huckabees," 2007's "24"), a judge, and DA Joe Lobruto (David Strathairn, "Good Night, and Good Luck") represent the opposite and are all too handily available for Beachum's veering moral compass. They're both welcome presences, though, as is Fiona Shaw ("The Black Dahlia," "Catch and Release") as the stupefied case judge, and although she spends most of the film attached to life support, Embeth Davidtz has created enough sympathy for her cheating wife that her presence remains strong. Cliff Curtis ("The Insider," "Whale Rider") is wasted, however, as Beachum's supporting detective. The film has a rich, ripe look accompanied by a lush score by Jeff Danna ("Tideland," "Silent Hill") and Mychael Danna ("Tideland," "Little Miss Sunshine," "Breach"). "Fracture" has obviously been cast and created with more care than the average Hollywood product these days. Too bad its own cracks are all too apparent.