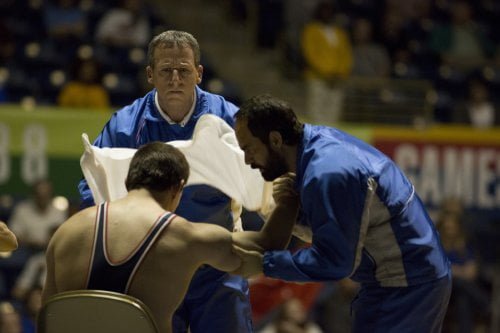 Mark Schultz (Channing Tatum) won the gold medal for freestyle wrestling at the 1984 Olympic Games in Los Angeles and the World Championship in 1985. The year before the 1988 Olympics in Seoul, he was approached by multimillionaire John E. DuPont (Steve Carrell) to help the philanthropist form a wrestling team to compete in the games as Team “Foxcatcher.”

Even after winning an Olympic gold medal, Mark Schultz (Channing Tatum) was always in the shadow of his older brother Dave (Mark Ruffalo), also a gold medalist. Struggling as Dave's assistant in Wisconsin, Mark's upset to see his brother courted by USA Wrestling to coach in Colorado, a gig the family man's planning to accept. Just at the right moment, Mark's fortunes appear to turn for the better when he gets a phone call from billionaire John du Pont (Steve Carell), asking him to come and train for the 1988 Seoul Olympics at "Foxcatcher." Working from a complexly layered screenplay by E. Max Frye ("Something Wild") and Dan Futterman ("Capote"), director Bennett Miller's ("Capote," "Moneyball") latest 'based on a true story' movie is not only a compelling tale of a disturbed billionaire's struggle for the control of a young wrestler with the man's brother, it cuts to the quick of the fouling of American ideals by the country's imbalance of wealth. Featuring not one, but three great performances (and a small but impactful supporting turn by Vanessa Redgrave as Jean du Pont), "Foxcatcher" is a great American story, literary and tragic. We first meet Mark preparing to give a speech at a school. He takes his gold medal out of its case with great reverence, then departs his ugly faux Tudor apartment building in his beater. After his earnest talk, he collects his $20 fee, explaining to the administrator that he's not his brother. Tatum makes Schultz's sad inner world so palpable, you want to give him a hug. At the gym, Tatum and Ruffalo define their relationship with fine strokes. There is a deep, loving bond there, but also jealous aggression on Mark's part, guilt on Dave's. Dave, who raised his brother, knows he is all Mark has, but he also has a wife (Sienna Miller, "Factory Girl," HBO's "The Girl") and two kids who need him. When John du Pont enters the picture, Mark will become a battlefield with Dave never quite sure what he's fighting for. Mark tries to talk Dave into joining him at Foxcatcher Farms, but ends up going it alone. After having been told on his introductory visit that 'We as a nation failed to honor you,' he's given an odd welcome, dispatched to a lush chalet but told the 'big house, Mrs. du Point and her world class horses off limits.' But once he begins to build his team, Mark begins to gain confidence, winning the 1987 Worlds in France with both du Pont and Dave in attendance. Things begin to change dramatically, though, when du Pont flies Mark to D.C. with him to make a speech. Encouraging his athlete to indulge in his cocaine binge, du Pont coaches his own introduction as an 'ornithologist, philatelist, philanthropist,' and a father figure to Mark. When he later recognizes that Mark still turns to Dave as his wrestling guru, he publicly slaps the man down and brings in Dave Schultz to take over the team. Mark spirals downward, eventually leaving, and when du Pont surveys what he has lost, he shoots and kills Dave Schultz. The screenplay takes some license with fact (Jean du Pont was already dead when her son built his wrestling team, du Pont had a two day faceoff with police after killing Dave), but the modifications serve the story well (John's rejection of his mother while following right in her footsteps, Jean's history of the insanity produced by maintaining a family fortune, du Pont being wrestled to the ground by the men who indulged du Pont in target shooting). Miller and his cast fill every scene with subtext - the obsequious way the wrestlers treat their drunk benefactor, John's pathetic attempt to impress his mother supported by Dave, Dave's discomfort in calling John a mentor for a documentary shoot, his easy manner in telling John that he's unavailable to him on Sunday because 'it's family time.' Tatum has the largest arc in the film and gives his best performance to date here, emotionally as well as physically. Carell, almost unidentifiable behind a beaky nose prosthetic (makeup by Bill Corso), speaks in an unnaturally even tone, his words disjointed. The actor epitomizes the old adage 'the rich are different,' awkward and entitled, yet oddly sympathetic, as much of an outcast in his monied world as Mark in his. Ruffalo, with a balding dome and wrestler's gait, is the grounding normalcy. The actor lets us see his character picking up signals, but never quite figuring out what's gone wrong. Production design is full of American symbols, pictures of George Washington in Mark's shabby apartment reflected back at Foxcatcher, located right next to Valley Forge. Du Pont sees himself as an eagle, a frequent image, and early fox hunting footage recalls our British roots while also separating the patrician world of the Du Ponts from the "Deer Hunter" depression of the Schultz's home. Greig Fraser's ("Let Me In," "Zero Dark Thirty") cinematography showcases the du Pont estate from a distance, an almost misty realm reached by solitary vehicles travelling over long roads. Wrestling scenes are framed to highlight the strategy of the match. The unflashy score (Rob Simonsen, "The Way Way Back") does what it's supposed to do, accentuating emotional undercurrents without calling attention to itself. Watching this movie, two recent articles sprang to mind, one about how poor students doing everything right will never achieve what rich ones doing everything wrong will, the other about the negative effects of inherited wealth. If ever a movie had compelling subtext for our time, it's "Foxcatcher." Grade: