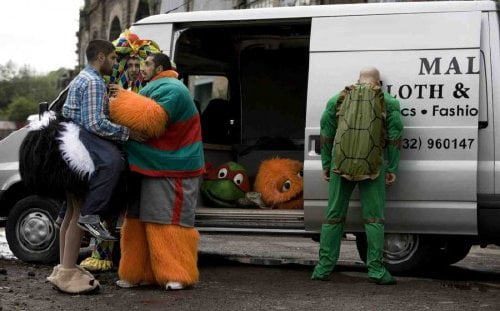 Omar (Riz Ahmed, "Centurion") is fed up with the treatment of Muslims around the world and in his English home and decides to take up the cause as a Jihadist, much to the delight of his dim best friend Waj (Kayvan Novak, "Syriana"). White Islamist convert Barry (Nigel Lindsay) is into general rebellion and Faisal (Adeel Akhtar, "Traitor") knows how to make a bomb but doesn't fancy wearing one. If this quartet can perform a terrorist act without bungling it they will be as "Four Lions."

With writers involved with Armando Iannucci's British series "The Thick of It" which spawned the film "In the Loop," one would expect some outrageous and biting political satire with this nerviest of premises, a comedy about Islamic suicide bombers, but, unfortunately, director Chris Morris's film is far less incendiary than it thinks it is. The film features strong characters, and wisely, is an equal opportunity offender (British civilians and police being as dumb as the protagonists), but almost all of its laugh out loud moments are derived from explosives going off at the wrong time or place. "Four Lions" plays like The Three Stooges plus one. For starters, Omar's introduced as a ready made Jihadist. There's little background for his commitment to the cause. In fact, Omar's a very modern and progressive Muslim as exhibited by his behavior with his wife and as contrasted to his far more extremist brother, who is not involved in bombing plots. But Omar's given a comedy staple - frustration. His best friend, Waj, is an endearingly childlike dim bulb (he's reading 'The Camel that Went to the Mosque'). Barry is a misdirected skinhead, overly aggressive and peeved that Omar and not he is running the show. When Omar gets the 'secret message' from his uncle in Pakistan that they are to leave for training camp, it takes all his skills to get Barry to stay behind. Unfortunately, his uncle sniffs out Waj's idiocy in seconds and Omar himself is his own worst enemy - when a U.S. drone plane threatens the camp, he shoots a missile at it, only backwards, towards the camp he thought he was protecting (closing credits give a news account of the incident that provides one last chuckle). With his tail between his legs, Omar returns and tries to cover up their embarrassment with his own plan, but while they've been away, Barry's recruited Hassan (John Tuturro lookalike Arsher Ali), a rich wannabe rapper drawn, like Barry, to the allure of making his own bomber video. And Barry butts heads with Omar over the plan, too. He thinks they should bomb the Mosque to get the natives 'riled up,' shades of 9/11 conspiracies. Omar wants to do something grand, not just 'bomb the local chemist's, and his boss (Alex MacQueen, "In the Loop") gives him his idea - dressing in costume for charity while running the London Marathon. There are some amusing undercurrents, like how Barry uses his anti-Semitism to excuse his own failures or the arguments over what constitutes martyrdom when they begin losing their own to ridiculous accidents. The title comes from the allegory Omar tries to make out of Disney's "The Lion King" to explain Jihad to his son. But the unsettling aspects of the film, like how Omar calmly discusses blowing himself up with his wife (Preeya Kalidas, "Bend It Like Beckham") and young son, or the film's ending, which betrays our empathy for the film's antihero, aren't rooted in humor or political satire. In the end, the filmmakers just seem to run out of ideas, concluding with a riff on Guantanamo that again, hasn't been rooted strongly enough to really take hold. Technically, the film has the look of a British television program, although the repeated use of an establishing shot of Omar's home is effective as a reminder of the evil which lurks in the every day. The actors are really the high point here, though, each carving out a distinct type that together give Omar an insurmountable obstacle.